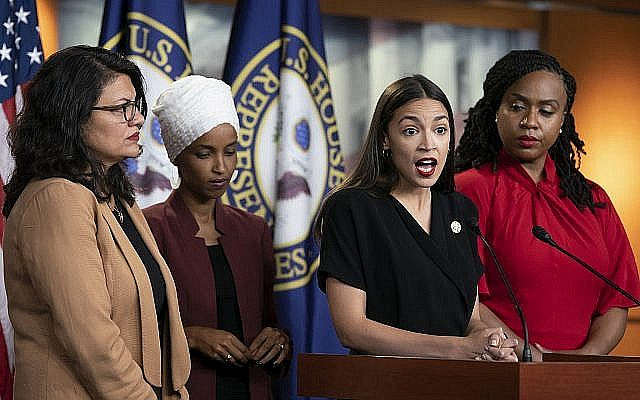 "The Squad" during a news conference at the Capitol in Washington (AP Photo/J. Scott Applewhite)

A student at George Washington University, Blake Flayton, became well known when he wrote a New York Times op-ed that decried the typical anti-semitism of today’s progressive movement. “[Progressives] have made it abundantly clear to me and other Jews that any form of Zionism — even my own liberal variant — is a political nonstarter. [To progressives] Zionism itself is, to parrot the Soviet propaganda of several decades ago, racist. Anybody who so dares to utter the words “right to exist” is undeniably a proponent of racism.”

Flayton told of his firsthand experiences, “At a recent political club meeting I attended, Zionism was described by leadership as a “transnational project,” an anti-Semitic trope that characterizes the desire for a Jewish state as a bid for global domination by the Jewish people. The organization went on to say that Zionism should not be “normalized.” Flayton concluded by writing, “This is our new normal. In progressive circles across the country, it does not matter if you strongly oppose the right-wing leadership in Israel; if you are a Zionist, you are seen as the enemy.”

“Why are progressive, liberal organizations increasingly tolerant of anti-Zionist language and actions? What does the rise of “new anti-Semitism” mean for Jews and for the Jewish state? And are Jews themselves contributing to anti-Semitic rhetoric?” asked Stacey Palevsky in a Jewish San Francisco article years ago but just as relevant today. Progressives accuse Israel of being an imperialist power and Israel is thought of as an example of white colonialism with no objection. Israel is described — with no questioning — as an apartheid state by progressives.

It is the lack of facts and critical thinking that forces progressive reliance on narrative and superficial understanding of a situation and leads to Richard Cohen’s classic progressive anti-semitic Washington Post column, “The greatest mistake Israel could make at the moment is to forget that Israel itself is a mistake…The idea of creating a nation of European Jews in an area of Arab Muslims (and some Christians) has produced a century of warfare and terrorism of the sort we are seeing now…. Its most formidable enemy is history itself.”

Congressman Jamaal Bowman of New York defeated pro-Israel Congressman Eliot Engel and is a member of “The Squad,” — progressive congresspeople who are highly critical of Israel and have made antisemitic comments. Quote tweeting Progressive and anti-Israel “If Not Now’s” critique of Israel for not giving Palestinians the COVID vaccine, Bowman tweeted, “Netanyahu must ensure that both Israelis and Palestinians have access to the COVID vaccine. This cruelty is another reminder of why the occupation must end.” The accusation was pure anti-semitism reminiscent of a blood libel. Three weeks ago, I outlined the reasons why critiquing Israel for not giving Palestinians vaccines is anti-semitic. Bowman deleted the tweet without comment.

Rabbi Avi Weiss, a constituent of Congressman Bowman wrote to Bowman, “The Palestinian government is party to the Oslo Agreement which, in Article 17, declares that it is responsible for the health of its citizens. When considering this just two years ago, the Palestinian Authority allocated $330 million to the families of terrorists — money that could have covered the cost of vaccines for all of their people. They bear responsibility.” Rabbi Weiss had written “It would make sense to not only speak to the Israelis, but to New York Jewish leadership before making outrageous allegations about Israel’s vaccine policy.” I’m hoping it was Rabbi Weiss’s letter that brought Congressman Bowman to delete the tweet. I’d have preferred an apology to accompany the tweet, but let’s take what we can get right now and through conversations and advocacy build from there. For a progressive that is reflexively against Israel to recognize that Israel isn’t at fault is a big move. We should give him credit and encourage him to keep growing.

Congressman Ritchie Torres said that his strong support for Israel was a primary distinction between the anti-Israel progressives and true progressives like himself, “I came to observe that there are activists who have a visceral hatred for Israel as though it were the root of all evil. The act of singling out Israel as the Boycott, Divestment and Sanctions movement has done is the definition of discrimination.” Torres considers himself a strong supporter of the Jewish state “not despite my progressive values, but because of my progressive values.”

Congressman Torres stressed, “I strive to keep an open mind. I am known to be pragmatic, open-minded and thoughtful, and I listen to all sides of debate, but as a wise person once said, ‘Keep an open mind, but do not keep your mind so open that your brains fall out.’ There is a difference between constructive and destructive criticism. Criticism of a country’s foreign policy, whether it’s American or Israeli foreign policy, is fair game. But the attempt to delegitimize Israel, the attempt to question Israel’s right to exist or right to defend itself, that, to me, crosses the line to destructive criticism. I consider anti-Zionism a form of antisemitism, and I am not going to give consideration to anti-semitic voices, voices that are dedicated to delegitimizing Israel as a Jewish state.”

Intelligent critical thinking leads to understanding the truth of the Israeli-Palestinian conflict. All too often these are missing in progressive takes on the conflict. The narrative that a power imbalance equals abuse and discrimination is quickly accepted by progressives who assume by Israel’s power it must be in the wrong. When critically examining most Palestinian indignities and suffering, it becomes clear Hamas and the Palestinian Authority are responsible for their people’s abuse — and not Israel. I’m hoping that Congressman Torres’s Pro-Israel positions and Congressman Bowman’s tweet show other progressives that blindly following an anti-Israel narrative puts you on the wrong side of history.