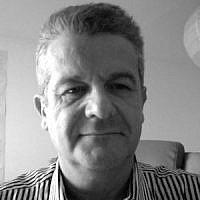 The Blogs
Angus Cargill
Apply for a Blog
Advertisement
Please note that the posts on The Blogs are contributed by third parties. The opinions, facts and any media content in them are presented solely by the authors, and neither The Times of Israel nor its partners assume any responsibility for them. Please contact us in case of abuse. In case of abuse,
Report this post.

One of the most profound changes in Indian history was the sudden opening up to the outside world that took place after Darius I’s invasion sometime between 520 and 510 b.c.e. Within a few years, [509-493 b.c.e], Persian government records, the “Persepolis Fortification Archives” tell us of Indians present at court in Persepolis and Susa, and travelling along the government highways that connected India with Mesopotamia, Egypt and Europe. Indians bearing tribute to the Persian king and leading the unique humped Brahmi cattle are carved in relief in the royal palace of Persepolis alongside Jews and other nations of the vast Persian empire. In Herodotus we read of Indian soldiers in the Persian army that looted and burnt Athens in 480 b.c.e, and were forced out of Greece the following year.

At the other end of the “royal roads” there’s a tantalising reference in the commentary on the earliest Buddhist scriptures to “Greek Statues bearing torches” in the assembly hall of the Sakya people located in the Buddha’s hometown, Kapilavastu, following the example of the Persian kings in Persepolis and Susa, where Greek stone statues were also displayed to commemorate the expedition to Greece. At the same time the focus of education in the Buddha’s mid-Ganges valley area seems to have moved west from the older centre at Varanasi to Taxila in Persian territory, where many of the Buddha’s friends, patrons and relatives were educated. A massive change in Indian religious philosophy also took place following Darius’ invasion, with the creation of two of India’s historic faiths, Jainism and Buddhism, and consequent on the compilation of the Upanishads, arguably of Hinduism too. So what, you may ask, has this got to do with the Jews?

Arguably, this was the moment when Jewish religious ideas were experiencing a golden age, stimulated by the bitter experience of defeat and exile to preserve and add to their centuries-old traditions of literature and philosophy, and bequeathing to the world the book which to many of us, Jews and non-Jews alike, contains not only the most inspiring poetry, but the most humane and civilising ideas in the history of humanity, and which stands alone for its influence on the history of mankind. Converts were made and and links forged with the Persian monarchy that led to Jews becoming socially prominent and to the remarkable support given to monotheism by Persian kings from Darius I onwards, and for the return to Jerusalem.

Given the presence of Indians throughout the Persian empire, the controversies generated by the return, the contacts of some of the Buddha’s closest associates with Persia, it is not in the least surprising that news of this event should have come to the Buddha’s attention. The probable lifetime of the Buddha [c480-c400] coincides with the establishment by the Persian government of the province of Yehud and the rebuilding of its capital city, and it is widely believed that the Samyutta Nikaya, the section of the early Buddhist scriptures in which it appears derives from the Buddha’s own teachings. The Buddha preaches many a parable to his followers, and this story comes in the context of an extended explanation of causation in this text, one of the core collections of early Buddhist teachings preserved in the ancient Indian language of Pali. Nonetheless, it is one of the Buddha’s most memorable illustrations of his religious ideas.

Isaiah echoes this. “For Zion’s sake will I not hold my peace, and for Jerusalem’s sake I will not rest, until the righteousness thereof go forth as brightness, and the salvation thereof as a lamp [that] burneth. And the Gentiles shall see thy righteousness, and all kings thy glory: and thou shalt be called by a new name, which the mouth of the Lord shall name.” “And they shall call them, The holy people, The redeemed of the Lord: and thou shalt be called, Sought out, A city not forsaken.” Isaiah 62:1-2, 12.

As a child the Buddha is believed by Buddhist tradition to have excelled in archery and wrestling, accomplishments appropriate to a member of his military caste, in his teachings he uses military metaphors extensively and demonstrates detailed knowledge of related crafts such as chariot and arrow-making, and his final prophecy before dying was given to the chief minister of a local king about the advisability of invading a neighbouring state.

Apart from his marriage at 16, no other credible information is recorded until he leaves home to become a wandering renunciant aged 29. This covers a period from approximately 465-452 b.c.e., corresponding to the intense military activity in Persia accompanying the Egyptian revolt of 465-454 and the continuing Greco-Persian wars which concluded in 449 b.c.e. The Buddha’s teachings draw a discreet veil over anything that does not edify his followers, including his own previous life, and while he may have remained at home enjoying the luxuries of the Indian elite during this period, it is logical to assume that, at the height of their youthful vigour, either he or his associates from the military caste followed in the footsteps of the soldiers who took part in the invasion of Greece, and who must surely have been responsible, directly or indirectly, for the presence of Greek statues in the Buddha’s national assembly hall in Kapilavastu.

Many aspects of the Torah find their echo in Indian teachings of the era, not to speak of the religious teachings of other parts of the vast Persian empire such as Greece and Persia itself, for whom Darius decreed the monotheistic faith of Zoroastrianism as the royal cult at this time. It was an era of unprecedented physical and intellectual exchange that only broke down after the death of Alexander, whose vision of a world kingdom under Macedonian rule died with him.

Anti-Semitism, which has been of immense significance in the study of ancient history, has prevented a rational view of the respective roles of the Jews and of the peoples with whom they were in contact during this period in the development of ideas, and this is likely to continue given its increasingly strong grip on university campuses worldwide. However, if this is ever loosened, we will perhaps learn of an age where international relationships from Athens to the Ganges were characterised as much by mutual agreement and respect as by warfare and antagonism, and in which much of the intellectual and religious leadership was provided by Jews, to the lasting benefit of mankind.

About the Author
Angus Cargill is a lecturer in research methods who formerly lectured in Tibetology at Minzu Unversity Beijing. His translation of "When Ice Shattered Stone. A Tibetan Childhood" by Naktsang Nulo was published in November 2014 by Duke University press. He has researched extensively into Indian religion, particularly Buddhism. The impact of Buddhism, Indian culture and its reception in the West has given him a clear insight into the development of more dangerous forms ofanti-Semitism in the post-Enlightenment era.
Related Topics
Related Posts
Comments