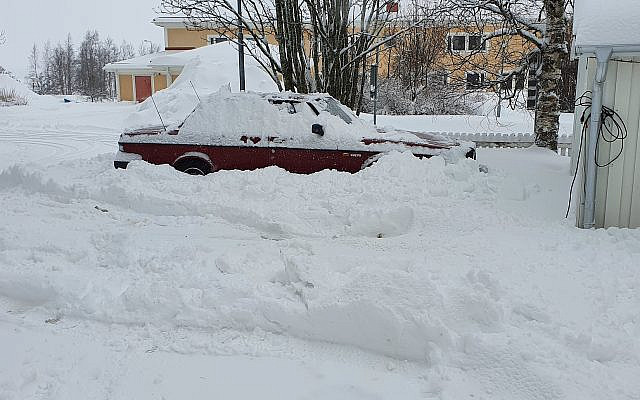 I live where I live. In northern Scandinavia. It’s peaceful, harmonic and a bit depressing when the sun doesn’t shine. On the other hand, it’s sunny 24/7 in june and july.

But this is not about where I live, but rather facing the challenges of having my family living  a hundreds or thousands of miles away.

The family-puzzle is our biggest challenge. We both work full time, I have 37 kilometers one-way to work. My wife has 85 km’s to her job, one way. We both work full-time, and sometimes more than that. Because we as a family don’t have any real relatives around. Except Sarah. She is my cousin and in the end it was a pure coincidence that we moved to our little idyllic town.

But Sarah can’t save us all the time. She has her own family to take care of – while also working full time. Just like her husband.

I’m so thankful that the kindergarden (called pre-school here) is basically for free and you can leave your most loved one there in safe hands. Knowing that they will feed the kids, play and experiment and in the meantime forming a bond between the kids. A bond that will last until they finish high school in many cases.

I’m ever so thankful that my kids doesn’t have to walk home alone in a snowstorm, in the burning heat or passing that awful and dangerous road where people are driving like there is no tomorrow.

But even though we have a very well-functioning social security net with free kindergarten, free uni, free healthcare, free public transport, 480 days of fully paid parental leave and even free to actually enter someone elses land – something still bothers me.  I’m free, but I feel rootless. Sometimes I just sing “I want to break free..”. The Queen-song you know.

Without a family who can step in and help when there is no other option – we are stranded. If I need to be child-free for a night I need to put my kids on a plane and fly 1000 miles to reach my first relative. That sucks. And it’s costly. My wife has relatives closer nearby – but just the driving takes the same time as taking that flight.

And the ever-so complex family puzzle, who does what, when, how, where and why? That’s our life in a nutshell. And no, we are not a team. I argue that my ego is my enemy and my opponent is my teacher. Because you don’t have room for being egoistic when you are De facto completely alone.

And yes, you can break apart. I do that sometimes. Wondering why I moved to a Scandinavian Gulag, as some of my relatives call it. I have a very humble wish that some day, somehow – I will move back. But for what? Listening to the nagging of my relatives is clearly not my option. It’s enough with the nagging already taking place on a daily basis. “Lama Switzerland?” “Leesh?” “Why? “It’s so cold it’s not good for your health, move back to the holy land or at least to Stockholm”.

For my relatives Sweden or Switzerland are the same thing. Like who cares how it spells? They look about the same, they have money and mountains. And it’s so so so so expensive. When my relatives are visiting me, they try to start haggle at places where I just want to disappear through a hole in the earth because it’s so awkward here. A cultural clash.

But I was about to die once. We met in Stockholm and flew to Berlin. One of my very, extremely israeli relative paid a visit to a souvenir shop. As I was wandering around boring souvenir-stalls I could clearly see the look of the store clerk was giving my relative. Because my relative was clipping iher toe-nails right in the middle of the shop. When the relative was done,  she just put it back and left the shop.

Imagine a very serious german store-clerk watching that. The look on his face is somethingnI will never forget. Perhaps my family is a bit retarded in a way or another – but I still need them. But so far we still have managed. It’s like locking two parents inside one of those floaty plastic bal thingies used for fun and then try to stand up in that thing when it’s stormy. That is when you need to balance, focus and hug each other – harder than ever.

Some take parents and relatives for granted. I envy them. But I made my life-choice and I still wouldn’t trade  it for anything else in the world. We bought our 2,5 stories house with a large and beautiful garden. Where I can be who I am – without being told what to do. Or having your annoying toe-clipper relative visiting every other day… gosh.

I just think I have to make with my feelings. Shut my eyes, imagining a floating leaf passing by in the water. That thought has a ticket aboard that leaf. Just let it go.

And for everyone moved to any remote place or to Israel (which is like super center of everything. You are brave. We are brave. We have challenged ourselves and we had and still have prove a lot more than any local.

So to all of you who just grabbed a piece of luggage, squeezing it with your basics and a photo album (yes a real physical photo album) I say kol hakavod and good night.