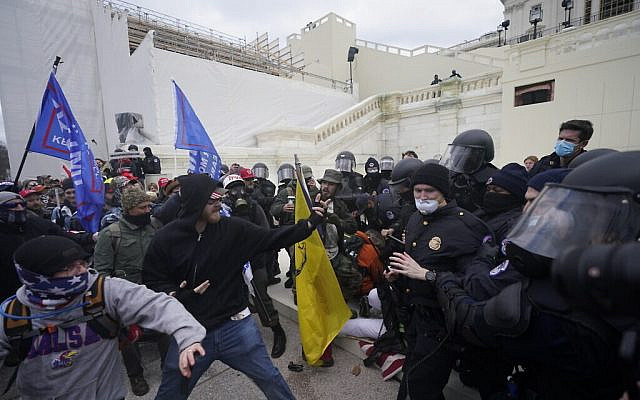 Trump supporters try to break through a police barrier, January 6, 2021, at the Capitol in Washington. As Congress prepares to affirm President-elect Joe Biden's victory, thousands of people have gathered to show their support for President Donald Trump and his claims of election fraud. (AP Photo/Julio Cortez)

By now the whole world is well aware that on Wednesday, January 6, 2021, a large group of racist, antisemitic thugs stormed the Capitol of the United States and, for a few hours, took it over.  During the riot, five people were killed, including one police officer.  It has also been widely reported that the band of thugs had been egged on by Donald Trump and Rudy Giuliani, the latter of whom  called for “trial by combat.” The press further reported that after a few hours, the thugs were removed from the Capitol. Congress then reassembled and accepted the report of Electoral College. Those are the facts.

While the press, especially the television press, should be commended for its factual reporting of the events, its characterization of those facts distorts what happened. In story after story, the press has emphasized the threat to democracy that the takeover reflects. Other stories have emphasized that the thugs who took over the Capitol will be back.

The press, which seems always to report the dark side of events, has missed the point entirely. In fact, democracy worked exactly as it should have. Consider the following.

On November 3, 2020, an election was held. By all accounts, it was a clean election. Even Trump’s Attorney General admitted that the Justice Department had found no evidence of widespread voter fraud that could have changed the outcome of the election.

After that, Trump supporters filed lawsuit after lawsuit challenging the results of the election, as was their right. Court after court, over 60 in all, rejected those arguments, Repeatedly, the United States Supreme Court upon which Trump was relying, refused to hear the cases. Significantly, the three Trump appointees to the Court joined in the Court’s refusal to take the cases.

Subsequently, each state certified the results of the election held in that state. Accordingly, the electors voted and declared Biden/Harris to have won by a vote of 306. to 232. Once again, despite Trump’s best efforts, the democratic system worked just as it was supposed to under the United States Constitution.

In short, in the election itself, the proceeding before the Electoral College and the review by the courts, the democratic process prevailed exactly as it was supposed to: every time, Trump lost.

The events of January 6, reflect another victory for democracy and a defeat for Trump. January 6th was the day when the results of the electoral college were presented to a joint session of Congress, as required by law. All members of Congress are permitted to make objections at the joint session. In the middle of this process, the thugs invaded the capital taking over both the House and the Senate chambers. The members of Congress were whisked away to safety. None of them was hurt physically. After a few hours, police and the national guard ended the melee and forced the thugs out of the Capitol. The joint session was reconvened. Every objection was heard and rejected, the results of the Electoral College were accepted by Congress, and Vice President Pence announced that on January 20th, Joe Biden and Kamala Harris would be sworn into office.

That is exactly how the democratic process as set forth in the Constitution of the United States is supposed to work. Once again, democracy prevailed and Trump lost.

Democracy continues to prevail in the aftermath of the riot. So far, over 50 of the rioters have been charged with various crimes, at least three of them with serious ones. I expect many convictions and prison sentences. Since a police officer was killed in the riot, I expect murder charges to be filed against someone. Given that Giuliani called for ”trial by combat” it would not surprise me if he were charged, too.

Will that deter Trump supporters from exercising their First-Amendment rights peacefully? Of course not, nor should it. The criminal convictions, however, may have a strong deterrent effect on those losers who took such joy in the assault on democracy. That, too, is exactly how democracy is supposed to work.

The real story is that democracy prevailed. At every stage of the process, President Trump and his gang of thugs lost. Too bad that the press missed it.