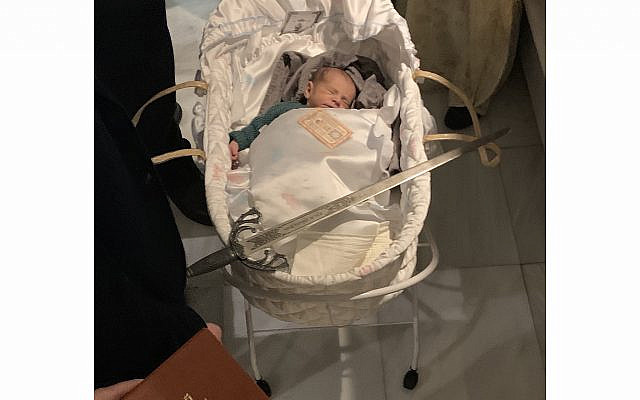 Spain is a place I never dreamed I’d visit, let alone perform a Brit Milah there. It all began about a year ago when my colleagues and I were contacted for a conversion of an Anusah (a person who’s family hid their Jewish identity because of the Inquisition). The woman came to us desiring to be fully Jewish on the eve of her wedding. Our Beit Din was excited to help. It always feels amazing to help people become Halachically Jewish without all of the stumbling blocks the Rabbinut set up; and it’s especially rewarding in cases like these where we’re welcoming members of our family back home.

This family left an impression because they all came together from Spain and were so excited about their future daughter-in-law entering their family. But when our work was done, I really didn’t think of them again until the grandmother contacted me about a month ago. She remarked that as soon as the mother knew she was having a boy she wanted me to be the mohel. I happily accepted their invitation; but there was more to the story that I learned only upon my arrival.

What was amazing about this Simcha is that there are very few Britot in this region. The grandfather is heavily involved in running the community so people came from far and wide to celebrate with them. The Minhagim of this area are also quite unique. To ward off the evil spirits, they put a knife under the baby’s mattress and even bring an Excalibur-style sword to the Zohar reading done the evening before. At the beginning of the Bris itself, the head of the Hevrah Kiddisha (burial society) is honored with sitting on the chair of Elijah. The event was a moving experience but the politics of the situation only became evident at the Simcha’s conclusion.

As It turns out, there are two mohalim in the surrounding communities whom I met at the Bris. One of the two lived about an hour away and was retired because he was suffering from eyesight issues. The other, who lived locally, had more complicated issues. When the family approached him to do the Bris, he demanded the couple’s Ketubah (marriage certificate) which they happily presented. The document listed the names of all the parties involved — the groom, bride, and parents. The bride’s name was listed as the daughter of Avraham our father and Sarah our mother, as is done with all converts. Upon seeing this, the mohel demanded to know who converted the bride. Since our Beit Din was not up to his political standards, he agreed to perform the Bris but without saying any blessings, indicating that he didn’t consider the mother or the baby to be Jewish. Understandably, the family did not want this rabbi to perform the Brit Milah because it was an insult to their daughter and their new grandson.

What is most perplexing is why the larger Jewish community consistently embarrasses converts when we are forbidden from speaking of their past? The Talmud, tractate Bava Metziah 58b, clearly states that once someone converts they are Jewish, through and through, and we are never meant to speak of it again. I’m not sure why I’m expecting more from the rabbis of Spain than what we receive from the Rabbinut in Israel, considering the Sephardic Chief Rabbi Yitzhak Yosef recently called into question the mass conversion of Russian Jewry. But it doesn’t have to be this way anywhere.

Over the summer our Beit Din converted a recent immigrant on the eve of his wedding. Interestingly, the couple had contacted a different rabbi to officiate at their wedding who was unwilling to be part of the conversion process. When I attended the wedding, I was curious as to how the rabbi was comfortable presiding over the nuptials when he wasn’t willing to convert the groom. So I asked him how this could be. He responded that they are two different issues. Just because he was unwilling to convert the individual had no bearing on his ability to be involved in the wedding. Once the conversion is done, the groom is Jewish and is just as eligible as anyone else for marriage.

This was a refreshing take on an age-old problem. And just as this rabbi officiated at this couple’s wedding, I happily performed this baby’s Brit Milah with the proper blessings, indicating his full status as a Jewish male in our community. We need more rabbis willing to take these stances and rise above politics to help those in need. The Gemara puts forth a major principle כח דהתירא עדיף — the strength of leniency is preferable. It is easy to simply forbid things out of fear. The real challenge is to prove what is permissible. We can’t spend our lives fearing what’s permitted because of the social ramifications. Nor do we have to try to fulfill as many legal positions as possible. When there is a legal way to permit things we must remember that these are real people with real problems standing before us, not just a combination of legal factors. Our Halachic system exists to solve problems, not multiply them.