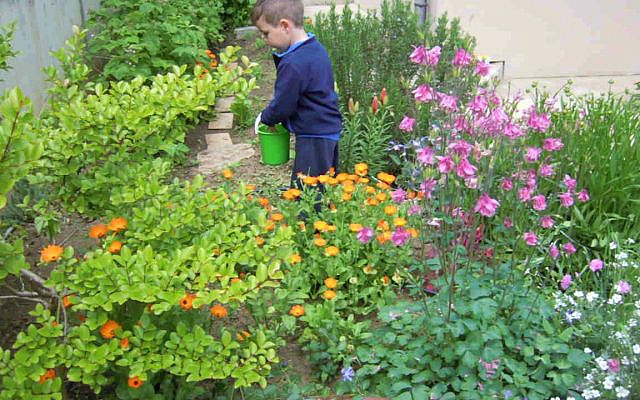 Keeping the Earth as a Garden of Paradise. Source: https://www.youtube.com/watch?v=Z5FjRUvb8kU

In accordance with the conception of Z’ev ben Shimon Halevi for Seven Heavens, the second Heaven of the Beriatic Yesod is called Rakiyah… The second Heaven is the place of Paradise for one who wishes to discover the key to himself and the purpose of existence. Here a man, on a sudden illumination of death or on a profound experience in life, might see the destination or destiny of his existence on Earth and in Heaven. (Z’ev ben Shimon Halevi, A Kabbalistic Universe, Kabbalah Society, London, 2007, p. 72)

In the process of blossoming of the Soul the spiritual Universe reveals to us the mystery of G-d and Creation. Of course, at this stage of our ascent we are like little children who have to grow up, gradually penetrating into infinite Divine Love, Wisdom and Truth.  But we already know our Heavenly Father (the Divine Spirit), our Heavenly Mother (the manifested Universe), our elder brothers and sisters (the myriads of angels and light beings in the higher worlds), and our younger brothers and sisters (the forms of life in the kingdoms of Nature). There is no end to the joy, inspiration and ecstasy when we realise the spiritual Truth about Creation and the mystery of G-d’s existence. This is our glorious return to the Garden of Paradise.

In every spiritual tradition there are beautiful, inspiring descriptions, messages, visions and cosmologies of the higher worlds, which are the result of living experiences and initiations. Their purpose is to encourage us to live righteously on earth and to prepare us for ascension to the higher Divine worlds (while we are still on earth or after “passing beyond”).

Now, however, the time has come for millions of people to make their conscious journey to the heavenly worlds, guided by the light of the Divine Blessings. Moreover, we have the task of materializing the Garden of Paradise on Earth and experiencing the heavenly worlds in their fullness. The reality of the Garden of Paradise will no longer be “life after life”, but rather the essence of our joyful, creative life while we are here on Earth. Then life and death will be just different states of existence, without any loss of self-consciousness or identity. Thus the great spiritual-cosmic cycle of eternal life begins, taking place both on earth and in heaven, which simply takes various forms and manifestations.

To contemplate the idea of human souls sprouting and blossoming in the Garden of Paradise is to experience an exciting vision. From a subjective point of view, the ocean of love, light and music manifests itself as a Divine Garden with myriads of cosmic-spiritual flowers – the human souls – each with incredible beauty, fragrance and uniqueness. This Garden is the world of the Universal Soul where the ‘ground’ is the archetypal world of our material cosmos, the ‘flowers’ are the blossoming human souls, the ‘gardeners’ are the Divine Masters, the workers  are the angels and many light beings from the heavenly worlds. The spiritual ‘Sun’ giving light and life to this Garden of Paradise is the CREATOR who unceasingly radiates Divine Love, Wisdom and Truth.

Thus the Sefirah Yesod, which is the foundation of the Kabbalistic Tree, becomes the reality of the New Earth, on which humankind will live in the new cosmic cycle. It will enjoy all the fruits of the Tree of Life and all the worlds in the vertical structure of Creation.

We can summarize that on a planetary level, we have G-d’s Blessing to witness and participate in the dramatic transformation of the Earth from a dense material body to a beautiful, radiant astral planet. Then for us the Earth will become as a living celestial Being with its own Planetary Soul (part of the Universal Soul) and with a Planetary Spirit – the planetary Divine Logos, who guides the evolution of the Earth. The Earth, as a celestial Being, has spiritual centres (chakras) and a very rich and well-developed structure of lay-lines of circulating energy which corresponds to the nervous system in the human body. Of course, this metaphysical change must take place first in our consciousness, in our understanding and perception of the Earth, seeing it with fully awakened Souls. Naturally, when we change our understanding and perception of the Earth, we will act differently. The new Enlightened Humankind will have a dynamic, co-creative life on Earth, keeping it as a Garden of Paradise.

Moreover, the actual participation in transforming the Earth into a Garden of Paradise will change the relationship of humankind with the Earth and all kingdoms of life on it.  According to Genesis which opens the Old Testament and gives the account of the First Covenant, when G-d created human beings, ‘He put them in command of all living creatures on Earth’  (Genesis  1: 28).  After the Flood, He even told Noah that ‘all the animals, birds and fish will live in fear of you’  (Genesis  9:2). Now, however, in the new Heavenly Jerusalem cosmic cycle, human beings are  invited  to  become  collaborators and co-creators with G-d and as  such  will  become  friends,  helpers  and  caretakers  of  the kingdoms of life on Earth.  In the new epoch, the Divine task of humankind is to transform the Earth into a Garden of Paradise and to bring the mineral, plant and animal kingdoms to a new level of evolution.  In fulfilling this Divine task, humankind will establish a completely different type of relationship with the Earth and Nature and will become a major factor in their future spiritual evolution.  Only by establishing this new type of relationship will humankind accomplish its ultimate Divine function of mediating between G-d and the Earth with all kingdoms of life on it, as was envisaged from the beginning of time when G-d created human beings in ‘His own image’.  The Divine mediatorship proclaimed by G-d will be at the foundation of the new Heavenly Jerusalem cosmic cycle as one of the most important and inspiring goals.

As I mentioned in the Post Transforming the Earth into a Garden of Paradise from 27.11.2022,  the etheric layer around the Earth will become a space for merging between the celestial worlds and the enlightened Earth. When we ascend to the Highest Divine World, we will understand the Earth as the projection of the Heavenly Jerusalem. The Earth will be appreciated as a majestic Divine Temple in the centre of which a gigantic cosmic-spiritual Cross of life is present. This is the Cross of immortal life which the Living God activates in the Reality of the New Heaven and the New Earth. The vertical axis of this Cross is a huge column of Light, filling the whole space and representing the vertical structure of the Universe. The horizontal axis of the Cross (actually a horizontal circular plane filling the entire cosmic-spiritual space) is the celestial reality of the Kingdom of God with its many mansions, including all the different spiritual worlds revealed by the world religions. Above the horizontal axis is the Throne of God with the “One sitting upon it“. The walls of this gigantic, etheric Temple are living Light which shines with all the colours of the Rainbow, exposing the presence of myriads of light beings, angels, archangels and many others. All the kingdoms of life on Earth – the mineral, plant, animal and human – are present within the Temple. This Temple of Life, in which Divine Light, Love, Unity, Harmony, Wisdom and Truth are manifested, is the New Earth in the new Heavenly-Jerusalem cosmic cycle of evolution.

Therefore, the New Earth for us will be enlivened by radiantly bright spiritual colours and will become first a Garden of Paradise, a wonderful “astral” planet, and after this it will appear as a Divine Temple in the Kingdom of God where there are many mansions. On the new Earth we will live as cosmic-spiritual beings and we will be mediators between Heaven and Earth for the spiritual elevation of the whole planet with all kingdoms of life on it. Thus, we will fulfil our predestined function on Earth as Divine Mediators between Heaven and Earth.

Source: Between Heaven and Earth http://www.awakenvisions.com/