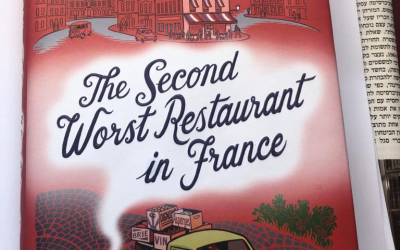 An easy read for a change, and this book (published by Polygon in 2019) provides a light-hearted view of life in France, focusing primarily on culinary matters. Paul, a writer specializing in subjects connected with food, is trying to write a book about ‘The Philosophy of Food,’ but his concentration is disturbed by the two Siamese cats belonging to his girlfriend, who is also his editor.

As everyone knows, cats do what they want, when and where they want and how they want, and so Paul finds it impossible to work. On one of her occasional visits to Edinburgh, where Paul lives, his ‘Remarkable Cousin Chloe’ offers him the use of her vacant flat somewhere else in the city, but that turns out to have noisy student neighbours. Finally, Chloe invites Paul to stay in the house she has rented in France for the summer.

So Paul goes to France, but the quiet village in which the house is situated turns out to be inhabited by a host of odd but likeable characters, such as Claude, the inept chef-manager of the local restaurant, his devoted nephew Hugo, the twin middle-aged ladies who own the house Chloe is renting, the dour baker, and Audette, the hapless pregnant young woman, whom the twins take under their wing.

And above all, there is his eccentric cousin, Chloe, who may or may not have had five husbands and who seems to be able to overcome every crisis by dint of her unfailing kindness and generosity. A woman of means, she extends a helping hand in the restaurant when it seems to be on the verge of going under, and even recruits Paul to tutor first Claude and then Hugo in the preparation of meals so that they are cooked in accordance with traditional French cuisine, avoiding the pitfalls that caused him to have food-poisoning when he first ate there.

Cousin Chloe comes and goes, Audette has her baby and is threatened by Bleu, the putative father of the baby (who is called Aramis but at one point – evidently due to an editing or proofreading failure – is suddenly called Artemis), and the caravan in which Bleu and his lady companion are staying is mysteriously blown up (without anyone being injured).

Paul decides to abandon the ‘Philosophy of Food’ project, focusing instead, with the encouragement of his girlfriend-cum-editor back in Edinburgh, on a putative TV programme plus accompanying book about the restaurant, which could previously have qualified as ‘the second worst restaurant in France,’ but is now well on its way to becoming one of the best (hopefully).

The book abounds in descriptions of French village life, with visits to local markets, sipping coffee in cafés, and general approvation of the beauty and laid-back way of life of rural France. It is, in effect a paeon of praise for life in France, and ends with a sentence consisting of just one word: ‘France,’