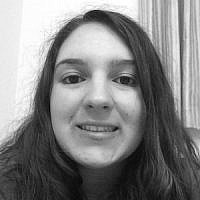 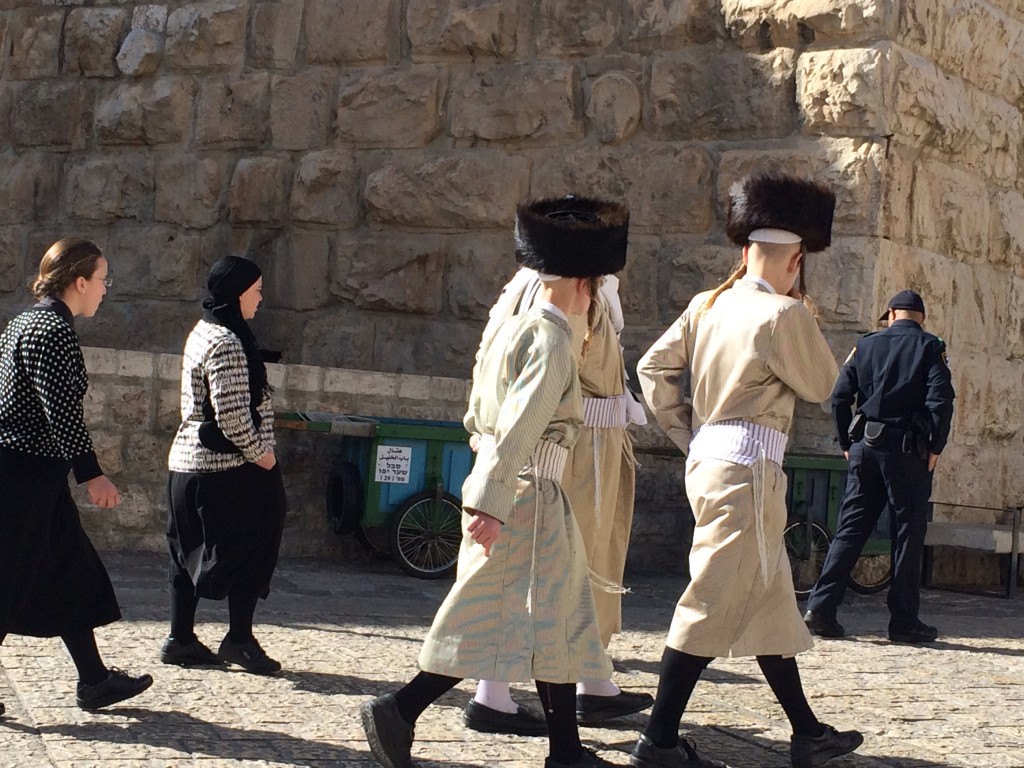 Shtrimel wearing Jews in the Christian Quarter of the Old City. 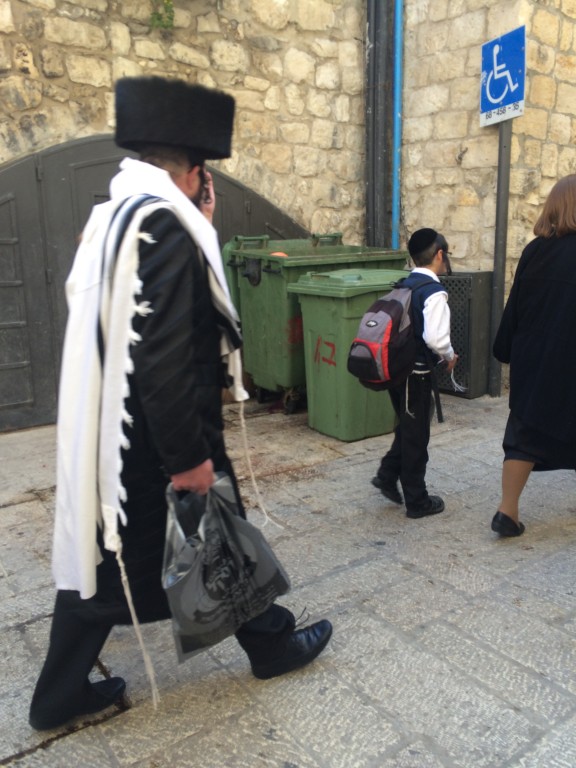 A shtriemel wearing Jew in the Old City. 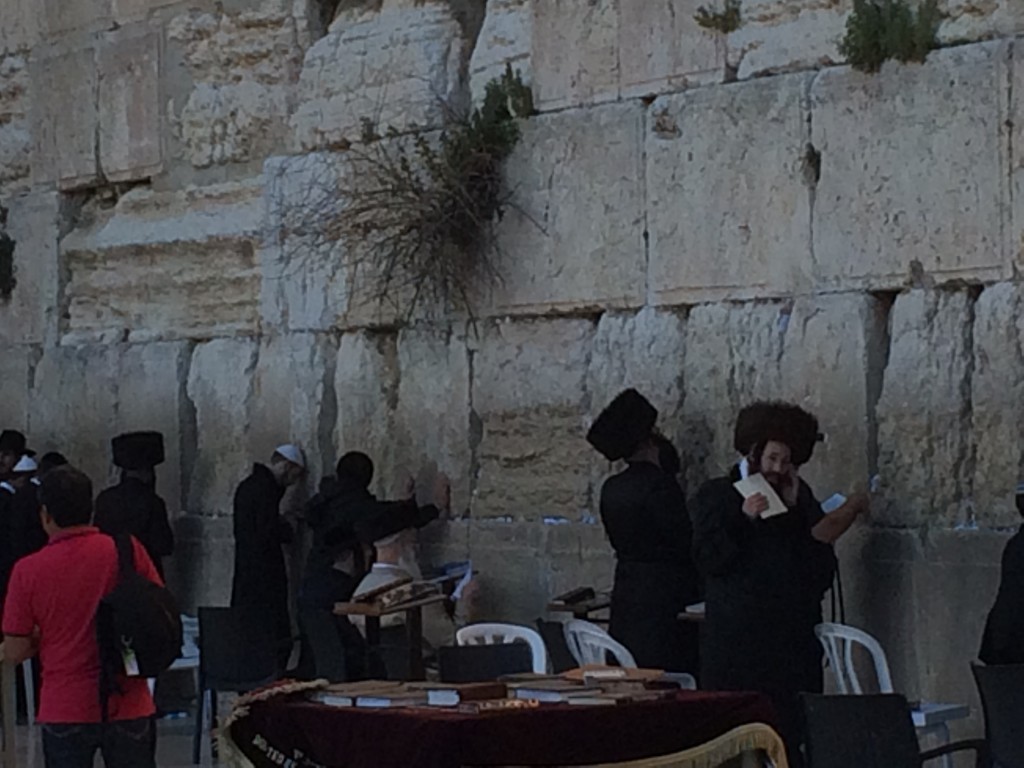 Shtrimel wearing Jews at the Kotel.

Before I came to Israel, I had never seen a “shtriemel.” I had seen ultra-orthodox men wearing black hats, but not the cylindrical, brown fur ones.

I have a deep interest in Hasidism and ultra-orthodox Judaism. I believe that their way of life is fascinating, and for many of them, the shtriemel is deeply engrained into that. We practice the same religion, but we each do it so much differently. The shtriemel is not merely a fur hat worn for warmth or for fashion, but worn as a religious garment. It is one of the most recognizable features of the ultra-orthodox man, in addition to the payis and black clothing.

The shtriemel originated in Poland, but it is not known precisely when and why. Most stories have to do with it being a defining feature for the Jews, but today, ultra-orthodox Jews wear it with pride. For something that is such a defining feature of the orthodox Polish Jew and would have been somewhat common in pre-Holocaust Poland, I saw one shtriemel during our entire time in Poland.

Shtrielmels, the round fur hats typically worn by the Haredi (ultra-orthodox) men, are thought to have originated in the sixteenth century. Haredi comes from the word Hebrew word “harada” which means fear, and is based off of the Isaiah 66:2 quote: “one who trembles at My [God’s] word.” Jerusalem, Bnai Brak, Tzfat, and Beit Shemesh are cities in Israel with large Haredi populations.

The shtriemel originated in Poland, but now, is most commonly seen in Israel. The history of the shtriemel comes from Poland, but there are three major tales that explain from where the hat is supposed to originate. One story says that the shtriemel originates when the Mongols invaded Europe, and because the Europeans hated the Mongols as much as they hated the Jews, and the Mongols wore round hats, the Europeans made the Jews wear round hats too. Instead of being insulted, the Jews embraced it. Another story is that the Polish nobility made the Jews wear fox tails around their heads to identify themselves as Jews. The last story regarding the shtriemel is that it originates from the most important Hasidic dynasty, specifically from Rabbi Yisroel Friedman, a Ukrainian rabbi with many followers and lots of power. That shtriemel was small than today’s, and resembled a black kippah lines with thick fur.

Most shtriemels are made of the genuine fur of tails of Canadian or Russian sable (which is like rabbit), stone marten, baum marten (which are both resemble ferrests), or American gray fox, but now, some Haredi animal rights movements are calling for shtriemels made of synthetic fur, as one shtriemel requires thirty tails. The shtriemel is typically worn after marriage, and in most communities, the father of the bride is responsible for its purchase. A kippah is always worn underneath, and according to Rabbi Pinchas of Koretz (1726-1791) who was a disciple of the great Hasidic Rabbi the Baal Shem Tov, “the acronym for Shabbat is ‘shtriemel bimkom tefillin’ (sh-b-t), meaning shtriemel replaces tefillin, a religious garment that contains holy scriptures that is worn during some prayers, but not on Shabbat.

There are four basic types of shtriemels. The first is the type from Galicia, Romania, and Hungary. It is the most recognizable type of shtriemel, and was also worn by Lithuanian Jewry. This shtriemel looks like a large circular piece of black velvet surrounded by fur. The Chabad, or Rabbi Menachem Mendel Schneersohn, shtriemel is only worn by the Chabad Rabbi, and is white velvet surrounded by fur. The shtriemels worn by the Congress Poland Hasids wore a type of shtriemels called “spodiks.” Spodiks are tall, thin, and more cylindrical. They are made from fisher takes (a small fox-like creature) or from fox fur. The largest community that wears spodiks are the Ger Hasidim, a sect of Hasidic Jews that follow one rabbi and originate in the town of Ger, Poland. The Grand Rabbi of Ger declared that Gerer are only allowed to wear spodiks or fake fur shtriemels that cost less than $600. Most shtriemels cost from around $1,000 to $6,000. Most men own two shtriemels: one inexpensive one called regen shtriemels that cost $800 to $1,500 and that they wear for occasions on which they do not mind getting the hats messy, and actual shtriemels are worn for Shabbat and other special occasions.

When I was in Poland, I only saw one person wearing a shtriemel. I saw this man during Kabbalat Shabbat in Krakow. He stood by himself, in the corner, praying. When it came time to say the Shema, the declaration of the Jewish faith, I watched him, and wished that I, one day, could say the Shema with the same conviction that he did. He stood on the opposite side of the shul, and downstairs in the men’s section, and I could still hear him. The women’s section was small, cramped, and the wooden floor creaked as anyone moved. Also, it really showed me the loss of Jewish culture in Poland. Poland is the birthplace of Hasidic Judaism, and in the little shtetl synagogues and big city synagogues that we visited, seventy years ago, we would have seen dozens upon dozens of shtriemel wearing Jews. We did not see one total throughout the entire trip.

The shtriemel, according to many stories, started as a form of persecution towards the Jews from Eastern Europe. However, Jews in the United States, Israel, and many other countries, wear the shtriemel proudly today, not because they are forced. I think that says a lot about the Jewish spirit. We are a resilient people, able to make the best of even horrible situations. In that sense, the solitary shtriemel that I saw in Poland represented so much more than just a hat. It represented the loss of a rich culture, a culture of people who could turn a persecution into something positive for themselves.