The Blogs
Naftali Moses
Apply for a Blog
Advertisement
Please note that the posts on The Blogs are contributed by third parties. The opinions, facts and any media content in them are presented solely by the authors, and neither The Times of Israel nor its partners assume any responsibility for them. Please contact us in case of abuse. In case of abuse,
Report this post. 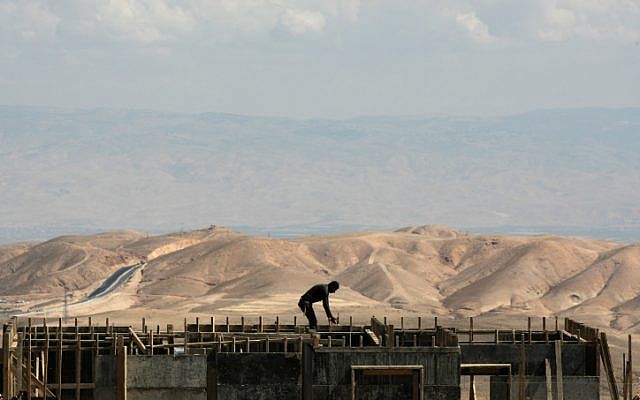 It’s too quiet here today. Looking out the window, I can see the deep wadi that runs down to the Dead Sea and the looming ancient fortress that watches over us. Both seem more inanimate than usual through the dusty silence. As if something has inhaled and held its breath against the stiff, cold breeze blowing outside. The haze through which the winter sun is attempting to peer seems to have muffled more than the light.

Looking again, I realize why. My neighbor’s half-finished roof lies exposed. Ribs of bare wood prone against the sloping angle nakedly await their red-tiled covering. For weeks now, the buzz of saws and the chink-chunk of hammers have been my daily background music. Just yesterday morning, I watched the workers clambering atop the steep pitch busily driving nails into wood, board onto board, covering grey concrete in white pine planks.

Today there are no Arab workers here and the quiet is oddly unsettling. This is not a town made for such silence. Perched above a cliff at desert’s edge, Tekoa is a bustling, sometimes Bruegel-esque country village — with children coming and going, horses and goats whinnying in their pens (or in the streets) and the burr and hum and rat-a-tat-tat of housing going up and fields being harvested. But not today; no dun of building, quiet.

I left Tekoa to visit a former student of mine in Otniel. Natan has just buried his wife. Dafna was murdered on her own doorstep by a knife-wielding Arab terrorist. I listened to him describe how they met: two shy young religious soldiers stationed in the security zone of South Lebanon. How he fell in love with her and the curls that peaked out from under her parka’s hood as they talked over guard-duty. How he, a boy from Jerusalem’s staid Rechavia, convinced her, who had just voted for Shimon Peres, to make their home in the wilds of the rural foothills between Hebron and Be’er Sheva. He mentioned how his children’s first worry was that their mother’s death would mean that the two foster children they had raised from infancy might be taken away.

We hugged, Natan and I, tears staining each other’s cheeks. No words about the horrid pain of a life brutally torn away passed between us. There was no need.

During summer evenings, the hills around Tekoa reverberate with bright lights and loud music. Our Arab neighbors celebrate their children’s weddings with gusto for days on end. But where will the money come from to wed them if their parents have no work? Today’s silence may be a harbinger of tomorrow’s as well. No, the wages of murder do not jingle like silver in a purse. They yield only the enforced silence of further suspicion and caution and pain.

We Jews have persevered; we have returned so that once more the sound of celebration is heard in the mountains of Judea and the courtyards of Jerusalem.

Today we cry over our heart-rending losses, but we will return joyfully to harvest the fruits of our always beloved homeland. The Jewish nation has chosen life. I pray that my neighbors will as well.

About the Author
Naftali Moses, born in NYC, has lived in Israel for over 30 years. He holds a PhD in medical history from Bar-Ilan University, and teaches and writes on the nexus of medicine and Judaism. The author of "Really Dead?" and "Mourning Under Glass", he has also translated several books on Jewish thought into English, published on philosophy in the Mishna, and aggadah.
Comments