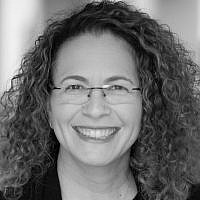 The Blogs
Ariel Blacher
Apply for a Blog
Advertisement
Please note that the posts on The Blogs are contributed by third parties. The opinions, facts and any media content in them are presented solely by the authors, and neither The Times of Israel nor its partners assume any responsibility for them. Please contact us in case of abuse. In case of abuse,
Report this post.

There have been several Hamas attacks over the Southern and Central areas over Israel since yesterday, but we in the Modiin are have not heard sirens for a while.  The silence is deafening.  Every truck, every motorcyle, every wind gust scares us into taking a double-take and making sure we are not hearing a siren.
It is quite frustrating, for I am currently suffering from a slightly progressive hearing loss issue.  It appears that the malady is genetic, and that it progressively gets worse over time.  Despite the hearing loss, I am acutely aware of sirens and loud noises. Why? Is it the “fight-flight” reflex we are born with since the time of Neanderthal men?  Is it the fact that fear can heighten one’s senses, even if those senses are dulled?  I wonder if others with such issues are experiencing this as well.
Last night, my husband was walking on his way to his car parked in the work parking lot.  Sure enough, there was a siren. He ran to the nearest shelter, and was fine.  But, I wonder, if it were me, would I hear it? Would my ears defy me? Would they take the social cues of people running, the fear of the crowd, the silent march to Safe Rooms?
People told me to download the Code Red App.  I did so, but the constant pinging of the Cod Reds was too much for my anxiety level. There is a Code Red somewhere in this country every thirty minutes.  I could not face the reality of its magnitude.  I silenced the App, and told myself to hope for the best.
So, as I await the next Code Red alarm, I pray that my ears do not defy me.  I pray that the silence continues here, and throughout Israel. But, if the alarm returns, I will be ready.  My malady will not prevent me from hearing G-d’s warning signs to take cover.  Silence is aquiesence to tragedy and fate.  Yet, a roar is one’s ability to scare the opponent and defend oneself.  Not only will I hear the roar, I will continue to do so myself.

About the Author
Ariel Blacher, MSW, is an educator in the Israeli school system. Her recent book, Gila Makes Aliyah, was published by Koren Publishers in 2018.
Related Topics
Related Posts
Comments