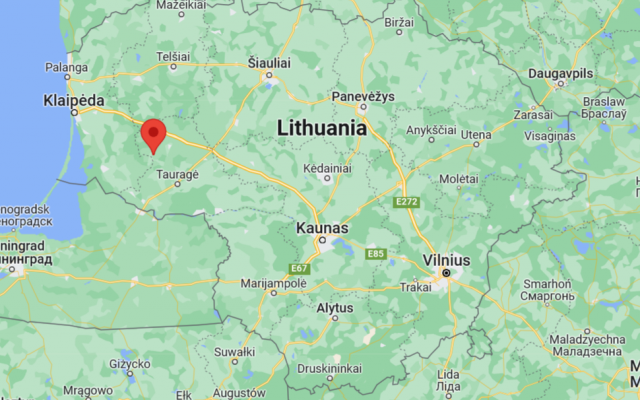 My speech at the Cape Town Holocaust and Genocide Center on October 27, 2022 is here:

THE SLAUGHTER OF THE JEWS OF PAJURIS

In 1937 Rivke had settled in Tawrik, where she had married Hirshl Furman, a native of a village called Teneniai, where his parents lived and died before the war began.

Teneniai is located six kilometers from the small town of Pajuris. Two Jewish families lived in this town. They were engaged in agriculture and kept small stores. The two families were:

Hirshl and Rivke used to spend their holidays and vacations with his parents in the village, and they knew the area well. They would often visit Hirshl’s cousin Moyshe Goldin and his brothers and sisters in Pajuris.

There were some fifty or sixty Jews in the town, who were occupied in agriculture and commerce. The economic situation of the Jews was very good. The town possessed a study house, a rabbi and a sexton.  The children studied in the local heder.

The Outbreak of War

On June 22, 1941 Rivke, her husband Hirshl and her sister Golde fled Tawrik, which had been heavily bombarded and burned. After a dangerous journey they arrived in Shavl. They were in the Shavl ghetto, where they lost their little Yitskhok in the aktion against children. Rivke, her husband and her sister were evacuated to the Stutthof camp in Germany in the spring of 1944, together with the rest of the surviving Shavl Jews. There Hirshl was separated from his wife. Rivke and her sister were in the Malken camp at Stutthof until the Liberation. They were liberated there by the Red Army. Hirshi died in Camp II near Landsberg.

Rivke went to Pajuris. There she found out that when the war broke out some of the Jews had fled to the village of Teneniai, where they hoped to be able to survive the war more easily. On the first day of the war, the Germans entered Pajuris and Teneniai.

The local partisans forced the two Jewish families from the village and those who had come from Pajuris to do various tasks. For a while all of the Jews lived in the houses of the two Jewish families. Then they were driven into a barn in a compound which belonged to the Lithuanian farmer Petras Budvitis, known as Dvarininkas.

The barn was actually an old house in ruins, its windows sealed with boards. The peasants from the village related that the partisans had thrown a grenade into these ruins, and that Jews had died.

Alter Feyges and Zaltsman were forced by the partisans to burn all the religious books and Torah scrolls from the study house. Then they were both taken away along the road to Kveidan and shot, five or six kilometers from town.

The partisans kept the rest of the Jews locked in the barn for some time without anything to eat or drink. A partisan kept watch. After they had been in the barn for some time they were taken away to the town of Khveidan, where they were shot at the same time and place as the Jews of Khveidan. Rivke does not know how long the Jews from the village remained alive in Khveidan. Nor does she know the date they were shot. (See the collective testimony concerning the slaughter of the Jews of Khveidan in the forest of Tubinai – LK)