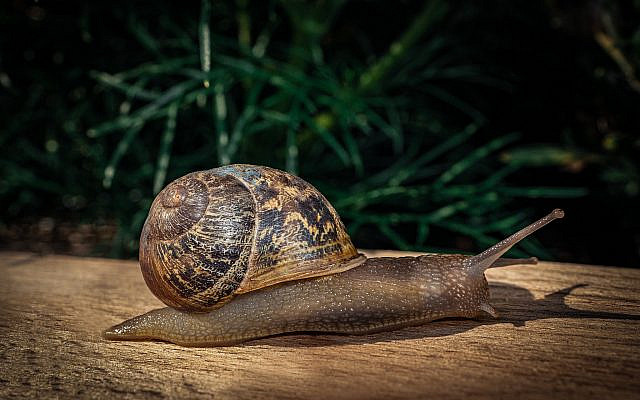 A Snail (Free for Use Photo by James Frid from Pexels)

Looking for a topic for today’s blog, I found the quantity of material somewhat overwhelming. The American dream seems to have turned into a nightmare. The entire world has gone crazy. I needed to slow down. Yes, I should adopt a snail’s pace. Perhaps I should send this blog by snail mail.

As an African proverb tells it – Snail is frail but does not fail to assail every nail on its trail.

We must approach the subject of snails with some caution, they know how to protect their way of life – they can be dangerous, even deadly. Freshwater snails kill more than any predatory mammal. They cause more than 200,000 deaths each year. That’s a lot more than tigers who only manage some 50 fatalities or lions with around 100 fatalities to their credit.
Even man’s best friend, the dog is responsible for 17,400 fatalities per year.
(The prize, of course, goes to the mosquito with no less than 830,000 fatalities per year. Their arsenal includes malaria, Zika, dengue fever, Japanese encephalitis and yellow fever.)

Many people have commented on the humble snail.

Unfortunately, I am not like a snail or a turtle, and I can’t take my houses with me when I move. Brigitte Bardot
Not short of a house or two, in 1986, she launched the Brigitte Bardot Foundation for the Welfare and Protection of Animals. In common with most snails, she is a vegetarian.
Ms. Bardot would probably not agree with one Doug Larson – Never doubt the courage of the French. They were the ones who discovered that snails are edible.

Groucho Marx was most definitely not impressed by our politicians – The difference between a politician and a snail is that the snail leaves its slime behind.

Lewis Carroll managed to squeeze two snails into Alice’s Adventures in Wonderland – The further off from England the nearer is to France. Then turn not pale, beloved snail, but come and join the dance.
Will you walk a little faster? said a whiting to a snail, “There’s a porpoise close behind us, and he’s treading on my tail!

Arthur Brisbane, a U.S. newspaper editor and writer, put it well – Opportunity comes like a snail, and once it has passed you it changes into a fleet rabbit and is gone.

We are a couple of years too late to meet George, a Hawaiian tree snail. Named after Lonesome George, the Pinta Island tortoise, he was also the last of his kind when he died on New Year’s Day 2019.

Kobayashi Issa was fond of snails. A Japanese poet, known for his haiku poems, he wrote the rather incomprehensible: O snail Climb Mount Fuji But slowly, slowly!

The Americans are a lot clearer. George Will, an American libertarian-conservative political commentator, had no difficulty in expressing his dislike of President Clinton: Like a snail crossing a sidewalk, the Clinton Administration leaves a lengthening trail of slime, this time on America’s national honour.

And finally, Bill Mollison, who was one of the co-creators of permaculture that works together with nature to create to stable and productive agricultural systems. His personal life was indeed productive, he had five wives, not at the same time I hasten to add. He once pointed out: You don’t have a snail problem; you have a duck deficiency.

And, today, with the coronavirus raging around us, we should all stay in our own shells.