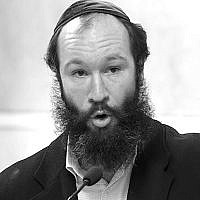 The Blogs
Zalman Mendelsohn
Apply for a Blog
Advertisement
Please note that the posts on The Blogs are contributed by third parties. The opinions, facts and any media content in them are presented solely by the authors, and neither The Times of Israel nor its partners assume any responsibility for them. Please contact us in case of abuse. In case of abuse,
Report this post.

I had the great privilege of attending the State of Union address by President Trump in Washington DC as the guest of my Congresswoman, Liz Cheney. I came to our nations Capital to talk with Senator Mike Enzi about a Jewish man, Menashe Levy, who is languishing in an Ethiopian prison for the past four years, without being charged with a crime. Senator Enzi and Ethiopian Prime Minister Abiy have a good relationship and our delegation was encouraging the Senator to ask the PM Abiy to look into the matter.

I also met with Senator John Barrasso and Congresswoman Liz Cheney, to share with them an update on the flourishing state of the Jewish union in Wyoming and to thank them for their support for Israel. Congresswoman Cheney graciously invited me to be her guest at the SOTU.

My experience at the SOTU reinforced my commitment to remain non-partisan in my communal work as a rabbi. The divisive nature of politics was on full display each time half of the nations elected leaders stood and cheered while the other half sat in protest. As a religious leader, I feel that religion generally and Judaism in particular must be a venue where all people can come together as one to help make our world a more gracious place.

After returning home to Jackson Hole, Wyoming, an elementary school girl came to my home to study Hebrew with my wife. I asked the girl how her day at school was and what she studied. She told me that her teacher shared his strong opinions about President Trump on immigration, people from Mexico and other hot-button political issues. I will not describe the nature of the teachers opinion because that would only contribute to the partisanship gripping our country. However, from listening to the girl, it was clear that the instructor was not teaching a curriculum on the history, process or the systems of political government. The teacher was simply telling his students who to like and who not to like, who is good and who is bad. The girl obviously accepted her teachers views hook, line and sinker.

I called the Teton County School District and learned that it has two policies related to politics in the classroom.

1. That no school facilities, equipment, or supplies be used for campaigning or other political activities nor shall the employee discuss the campaign with school personnel or students during the work day… (Adopted: 08/26/1999; 11/27/2017)

2. Freedom of expression is vital to our shared goal of the pursuit of knowledge, as is the right of all students to explore new ideas and learn from one another… The School District is committed to free, robust, and uninhibited debate and deliberation among all students. (Adopted:  04/14/1992 Revised: 05/18/2016; 03/21/2018)

There is no directive from the School District prohibiting elementary school teachers from using their authority position to tell students what to think about political leaders or hotly debated issues. The school official I spoke to stressed the teachers First Amendment right to free speech but the school already restricts political speech during campaigns. Obviously, teachers have existing limits on free speech. Can public school teachers opine on the supremacy of a race, gender, color or religion?

Parents and public school boards may consider another related thought. Just one year ago, our national conscience was shaken by the mass shooting at the school in Parkland, Florida.

My mentor, the Lubavitcher Rebbe, launched a campaign in the 80’s to promote a moral but nonsectarian “Moment of Silence” at the start of each school day in public schools. The Rebbe’s major impact on education has been honored by each President, starting with President Carter, by proclaiming his birthday as Education and Sharing Day, U.S.A.

Take the testimony of the administration of P.S. 191-The Paul Robeson Elementary School in Brooklyn, N.Y., describing the results of implementing the Rebbe’s initiative for a moment of silence:

“The moment of silence provided the students an opportunity to become more mindful and reflective of their experiences inside and outside the classroom. The students have become more introspective in their writing and have a greater appreciation, empathy, and understanding of their peers.”

What will a child think about for the minute of silence? A child can go home and ask Mom or Dad, “What am I supposed to think about?” Effectively, putting moral education back in the hands of those to whom it most belongs, the child’s parents.

Now that the debates about guns, mental health and armed teachers have once again come and gone, its time for our schools to implement a proven and positive method to enhance the moral and emotional well-being of our children. It may be the single most effective and cost-efficient way to improve schools, society and public safety. For materials and resources on a moment of silence, please visit Momentofsilence.info.

In closing, when it comes to schools, let us empower parents, not public school teachers, to impart political and religious values to our kids. When we do so, with the support of our schools, we build a better future for our families, community and country.

About the Author
Rabbi Zalman Mendelsohn serves as the co-director of the Chabad Jewish Center of Wyoming together with his wife, Raizy. His twitter handle @wyomingrabbi describes him as "Part-time steak connoisseur. Full-time rabbi. Love[s] to work, hike, read and teach. Blessed with an amazing family. Proud to serve an incredible Jewish community." For more info about Rabbi Mendelsohn and the Chabad Jewish Center visit JewishWyoming.com.
Related Topics
Related Posts
Comments