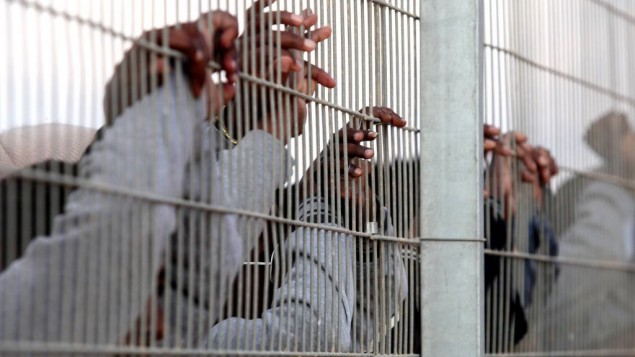 Contemporary Israel is one big bundle of contradictions: it is often as uplifting as it is off-putting; as compassionate as it is oppressive; as humane as it is cruel. Its people display amazing kindness and warmth, yet constantly exhibit reprehensible intolerance and xenophobia. They selflessly tender care to the needy while they close their doors to the dispossessed. And they sustain untenable policies at odds with the basic principles of human dignity which they claim to hold so dear. Nowhere is this odd admixture more visible than in Israel’s treatment of the African refugees and asylum-seekers that have reached its shores in recent years. The story of G (full name withheld) tells it all.

G was born in a small village in a war-torn West African state some 25 years ago. When he was barely eleven years old, militant rebels captured his hometown, razed his home and murdered his entire family before his eyes. He managed, somehow, to escape — only to fall into the hands of human traffickers who transferred him, along with others, to Egypt. Some two years later, he and his cohorts were smuggled across Sinai into Israel and then abandoned.

That is when the good Israel took over. G and a close friend were picked up and sent to a boarding school in the north of the country. They were enveloped in the warmth of the principal and the staff. G was placed in the hands of an adoptive family and began, with their love and the tremendous goodwill he so desperately needed, to begin to heal the wounds of the traumatic experiences he had undergone. While other children his age were celebrating their bar-mitzvah, G started to retrieve what was left of his childhood.

For four years, embraced and encouraged by marvelous people who were aware of the immense complexity of his background, G slowly came into his own. He studied, made friends and began to flourish — always propped up by people who were cautious of his fragility and understood his sensitivity. Five years ago, G successfully completed his matriculation exams, making him eligible for admission to one of Israel’s institutions of higher education.

Throughout his high school years, G was protected from harassment by the immigration authorities: as a minor he was safe from deportation. Yet repeated attempts to secure him official residency status in Israel failed. Once G completed his secondary education, he no longer enjoyed these safeguards. His country of origin was a numbing memory. He had nowhere to go, could not receive a work permit and was unclear as to how to proceed. He decided, together with the friend and compatriot who had accompanied him on his tortuous journey, to pursue his dream of a college education.

Four years ago G started to study at one of Israel’s foremost public colleges. Here, too, he benefited from an attentive administration, cooperative faculty and a group of students who took it upon themselves to help him when needed. He was granted a full scholarship, but — lacking any formal status — could not work to supplement his meager stipend. His application for a student visa was lost in a bureaucratic morass. He decided, with the backing of his guardians and the support of the Hotline for Refugees and Migrant Workers, to file for permanent residency. His requests were turned down time and again. Even his petition for residency on humanitarian grounds was rejected by the authorities (he is now waiting for his last appeal, which is due to be heard within the next few weeks).

During his four years as an undergraduate, G has experienced both the warmth of extraordinary Israelis and the cold crassness of others. He has moved from the relative safety of the classroom to the constant threat of arrest by immigration police on the streets. Every time he was accosted, he was able to prove that he is a student in good standing. But he spent sleepless nights until, finally, in his third year, he received a student visa. He has barely scraped through, yet he has survived and even thrived.

G is just completing his final requirements for his first degree and has begun to explore possibilities for graduate studies. His future, however, is totally uncertain. Israeli policy sees him as yet another infiltrator to be summarily extradited. The only home he knows is Israel; the only language he speaks properly is Hebrew; all his friends and support mechanisms are here. He simply has nowhere to go — but Israel doesn’t want him.

For years, policy-makers have done everything possible to avoid Israel’s obligations according to international refugee conventions to which it is signatory (and which it itself initiated in the aftermath of World War Two). It has failed to process most of the thousands of applications for refugee status — granting barely a handful in the past decade. It has promoted degrading legislation (struck down twice by the High Court and now revived), allowing for the detainment of asylum-seekers in Holot. It continues to incarcerate others in Saharonim prison. It has launched a program of expulsion of African migrants to third countries under the guise of “voluntary” repatriation, where their condition is, to put it mildly, precarious.

Since the recent elections, while parliamentary oversight has been minimal, the government has begun to simply expel even heretofore protected Eritrean and Sudanese nationals. And, above all, it has allowed a public campaign against foreigners to fester for several years with impunity. In complete defiance not only of international law, but also of Jewish history and elementary human values, Israel — instead of designing a measured, reasonable and humane policy towards asylum-seekers — persists in doing everything to exclude the foreigners from its midst.

G is the recipient of all that is good in Israelis and all that is wrong with Israel’s unconscionable policy towards those seeking refuge in its midst. Even G, who is the beneficiary of the goodwill of so many Israelis (for whom his success provides such satisfaction), is still in limbo. His formal standing is now a matter of life or death. G was recently diagnosed with a life-threatening disease. He is hospitalized and is currently undergoing intense treatment — surrounded by friends, faculty-members and students who have mobilized to accompany him at all times. But he lacks the peace of mind so essential for his recuperation. His status — in every sense of the word — remains ambiguous.

Which Israel will determine G’s fate? Will it be the Israel which has adopted him and made him one of its own? Or will it be the Israel that refuses to see the skilled and competent young man who has emerged from the bruised and shattered orphan dumped on its doorstep over a decade ago and insists that he leave the country forthwith? In many respects, G’s story — and future — is that of Israel.