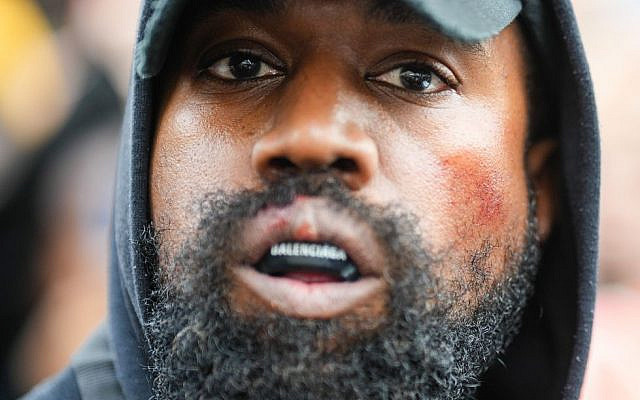 Strange that Kanye West became an anti-Semite when he discovered he is a Jew. Not only that, in his enormous ego, he defined that he is the true Jew, and all the other millions are not.

What is this new phenomenon?

What this lost man has not yet discovered is there are indeed black Jews, just as there are white Jews, and Arab Jews, and Jews in Muslim lands. There are brown Jews in India and Jews in Asia.

They are all a result of the dispersion of the Jews from our Holy Land of Israel.

But we are now in the ingathering phase.

This is why white Israelis are a minority in the Jewish homeland.

This is what Kanye West has not yet learnt.

He is so shocked, in his narcissism, to discover he is Jewish, that his knee-jerk reaction was to disclaim anyone else as being Jewish.

For him, it’s an exclusive black club.

He wants to use his newfound identity to spread his racist theories.

Sorry KW, or whatever you’re calling yourself today. But being Jewish is not your exclusive club where you get to decide who gets membership.

We have suffered enough from people who want to define us.

We are truly spread around the world. Many are affirmatively Jewish tied by a biblical umbilical cord to the Land of Israel, maintained the ancient traditions that keep us grounded and identified while others are wimp woke Jews who adopt whatever is trendy and “progressive” at the moment even if that means abandoning their traditional roots for newfangled fashion items like BDS and hate Israel campaigns, or imagining themselves as guilty of the sin of being born white. The biggest sin is being white and Jewish. It condemns them to being guilty of black oppression and white privilege. Black Lives Matter but not Jewish lives, certainly not those being lost in Israel.

Why should you care? After all, these Jews are white racist occupiers of other peoples’ land.

This is the nonsense being preached in America and you, Kanye, have put your own personal imprimatur onto it.

I suggest you take this message to heart, show a little more humility, and become aware of a Jewish history that is global because Jews have suffered a global victimhood for three thousand years, by all empires, races, and colors.  And now by you.

And then, when you have learnt that truth, you will understand the meaning and purpose of Israel and declare “Hallelujah. I have found the Promised Land!” as we continue to dedicate ourselves to welcoming downtrodden and persecuted Jews back into our collective tent no matter what creed or color they may be.

About the Author
Barry Shaw is the Senior Associate for Public Diplomacy at the Israel Institute for Strategic Studies. He is also the author of ‘Fighting Hamas, BDS and Anti-Semitism,' '1917. From Palestine to the Land of Israel, 'BDS for IDIOTS,' and his latest work 'A Tale of Love and Destiny,' the dramatic life of a Jewish heroine.
Related Topics
Related Posts
Barry Shaw