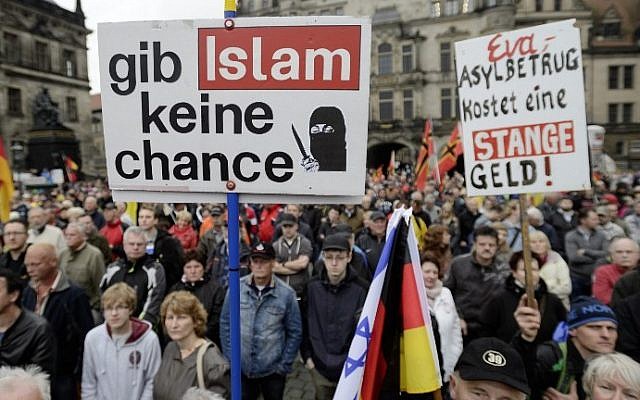 Supporters of the German right-wing movement PEGIDA (Patriotic Europeans Against the Islamisation of the Occident) hold up a poster reading "Give No Chance to Islam" as they attend a PEGIDA rally on June 1, 2015 in Dresden, eastern Germany (Jens Schlueter/AFP)

This year, finally, I expect to get an answer to a question that has been bothering me for the last fifteen years – since the issues of large-scale immigration into Europe and the failure to integrate the immigrants rose to the fore in European society and politics.

Is it possible, I asked in 2002 and have continued to wonder ever since, that 1,500 years of Christian culture in Europe will just roll over and die, without putting up a fight against the threat posed by Muslim immigration and the accompanying Islamification of Europe?

The answer should be provided through the democratic process now underway. Beginning next month and continuing through this year, a series of national elections in key European countries will take place. Dutch parliamentary elections on March 15 will be followed by the two-round French presidential election in April-May and, at some yet-to-be-determined point, Italy will hold a parliamentary election under new rules. The climax will come in September, with a general election in Germany – although several other countries are also going to the polls.

The cumulative result of this round of political activity will likely be ‘a redrawing of the political map’ in Europe. However – and this is the nub – the use of political clichés such as ‘redrawing the map’ hide a much more fundamental upheaval. After several decades in which ‘redrawing ‘the political map’ meant power shifting between well-defined parties that represented universally-accepted ‘left’, ‘right’ and ‘center’ labels, an entirely new map has emerged, populated by new entities representing totally different concepts.

It is therefore no exaggeration to say that what is at stake and set to be resolved this year goes far beyond the political battles that dominated the decades following the Second World War. It is nothing less than the substance of Europe and its component countries – in cultural, religious, ethnic and, yes, racial terms. This year, finally, we will witness a struggle for the mastery of Europe.

That phrase is immediately recognisable to generations of English-speaking high-school and university students who studied European history. Arguably the masterwork of A. J. P. Taylor, one of the most controversial, yet highly-regarded historians of the post-war era, ‘The Struggle for Mastery in Europe, 1848-1918’ traced the complex web of great power alliances, and the crises and wars between them, across the era when Europe dominated the world.

That era came to a bloody end in the First World War; the decline and fall of the European great powers and their empires was confirmed a generation later, when the Second World War left most of them physically shattered and all of them financially ruined.

What was less obvious was that the unprecedented bloodletting of the first half of the twentieth century had also gutted Europe morally and psychologically. Indeed, in the immediate post-war generation, it seemed that ‘the old continent’ still retained the capability to rebound, even from the self-inflicted catastrophe of a second Thirty Years War, as it had done so powerfully after the first, in the seventeenth century. A demographic boom, an economic ‘miracle’ and the emergence of a new ideology based on cooperation and integration created sufficient facts on which to base an optimistic long-term outlook.

But the achievements of the 1950s and 1960s proved to be Europe’s last hurrah – and even they were limited to Western Europe, whilst the eastern and southern parts of the continent languished, oppressed and poor. Eventually, in the 1980s and 1990s, the socio-economic powerhouse created by Germany and France in the post-war generation expanded to absorb both the backward south and the repressed east – but the effort proved too much for the nascent European Union and it has crumbled under the strain.

Yet that is a very partial summary and hence only a partial explanation of what the upcoming elections are about. The backlash against the secular religion preached by the European integrationists – ‘liberal totalitarianism’, as a dissident French intellectual once described it to me – is real enough and extends to globalisation and other issues that separate large swathes of the population from the ‘elites’.

Although those issues exist in the US as well – hence the Trump phenomenon – in Europe there is a specifically European element. This is the revolt by the older native population against the EU policy of allowing – nay, facilitating – mass immigration from Muslim countries. True, Brexit demonstrated that the nativists object even to Eastern European – i.e. white, Christian – immigrants. But across the Channel it is, on both sides of the battle, a far fiercer, more passionate and potentially deadly struggle.

It is nothing less than the struggle for the mastery of Europe, between two opposing cultures. The nativist Europeans have left it late, because their own demographic collapse ensures that the default option is that they will lose – their countries, cultures and continent.

If they now win power, where they win, the consequences will be horrendous, bringing widespread civil disruption and much bloodshed, verging in some places on civil war. The alternative, of Christian Europe going quietly into the night, would be less bloody – but also horrendous, in a different sense of the term.