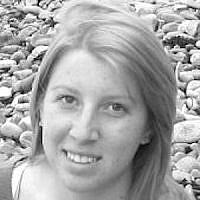 The Blogs
Christiane Sarah Burton
Apply for a Blog
Advertisement
Please note that the posts on The Blogs are contributed by third parties. The opinions, facts and any media content in them are presented solely by the authors, and neither The Times of Israel nor its partners assume any responsibility for them. Please contact us in case of abuse. In case of abuse,
Report this post.

I returned from Israel about a week ago so I had sometime to think about my experience there and put my sentiments into words. I was excited to visit Israel prior to leaving Canada but I could not have anticipated my reaction during the visit. I participated in the Taglitbirthright group where I met an amazing group of people whom were very open minded and concerned about the State of Israel and with whom I shared

Before leaving there was a preconceived notion that a trip like this is designed to recruit people and indoctrinate them to support Israel blindly in every way (politcally, socially, economically, etc.) – basically turning us into drones or neo-nazis (very exaggerated – but some people think this). But actually, I found that this was definitely not the case.

The purpose of this trip was to make the participants appreciate and understand the conditions and problems the State of Israel faces – not to spread hate about other nations, especially it’s neighboring countries. I added that last part because countless times I have read or heard negative comments and purported information about Israel’s politics or army, for example. I rarely see people voice their support for Israel or even criticize their own country’s policies. When I was in Israel I spoke (even bunked) with Israelis that were either currently or formerly in the Israeli Defense Forces (IDF) that openly criticize their own country’s policies – in other words they point the finger at their own country’s policies, while lending

their hands to others that are not Israeli citizens, and even ones would deny their existence. For example, Syrian soldiers have been treated in Israeli hospitals after being wounded. When I visited the Western Wall I realized that I really respect the resilience of the Israeli people, particularly the ones I had conversations with during my stay. Israelis are forced to join the IDF at the age of 18 and serve for 2 years to protect the State of Israel and some of them continue to serve after their 2 years are up – some people join the Israeli army who aren’t even from Israel or even Jewish, and have died protecting Israel. There is a need to protect the State of Israel and support her existence.

When it comes to the Israel-Palestine conflict I will not pick a side because again, I think everyone has an equal right to exist. I think the more you know and care about a political topic, the more likely you are to try to ignore evidence that makes the other side look good. The point of the Israel-Palestine debate isn’t to get to the truth of the matter. Rather it’s a quest in defense of one tribe’s moral superiority and this makes a productive debate on Israel-Palestine essentially impossible. No one agrees on a set of shared

facts, because agreeing to give ground on a factual issue means compromising on your side’s moral superiority or policy prescriptions. As things stand, the broken Israel-Palestine discourse admits little in the way of helpful policy thinking. Meantime, the situation on the ground in Israel-Palestine gets worse, and nobody seems to have any idea what to do about it. Choosing sides makes the situation worse and therefore makes us part of the problem.