Bannon, Gorka, Dershowitz, Lieberman, Cotton, Friedman and….Alper. While International press covered the highlights of the annual ZIonist Organization of America’s National ZOA Justice Louis D. Brandeis Award Dinner, I will share an exclusive interview with a real award winner, Heather Alper. During the gathering that over 1000 people attend, leadership of the group recognize the work of a few high school and college students and recent graduates for their outstanding volunteerism on behalf of Israel and International Zionism.

To me, these are the most important awards, because these young warriors educate and train millennials with facts about Israel, Jewish people, Zionism and anti-Semitism. This is even more meaningful in today’s climate, where many feel the young are, narcissists, angry and ignorant.

I sat down with Alper who graciously shared her feelings about being one of the winners of the Myron Zimmerman Award For Outstanding Pro-Israel Activism.

Q. What does this award mean to you?

A. As a Zionist Feminist, my mission is to advocate for the rights of all marginalized people. Being honored by Myron Zimmerman and the ZOA encourages me to keep fighting because I see that some of the most influential pro-Israel leaders in the world support my activism.

Q. How did you get involved in activism?

A. Three years ago, I visited Israel for the first time on a wonderful NCSY program for high-school students called TJJ Ambassadors. It focused on Israel advocacy training, but the timing of our trip was particularly significant. It took place during Operation Protective Edge, and on the very first night of the trip, I was woken up by the sound of screeching sirens alerting us to seek refuge in a bomb shelter. Although the rocket ultimately landed farther north of us, the experience was deeply frightening. However, instead of letting my fear get the best of me, I decided to fight back and become an advocate for Israel and the rights of Jews worldwide.

Q. What is the accomplishment you are most proud of?
A. My most memorable accomplishment since becoming an activist is probably the video I recently released with J-TV and ZOA entitled “Can you be a Feminist and a Zionist?” In addition to debunking the myth that feminism and Zionism are in any way incompatible, the video promoted my petition challenging the National Women’s Studies Association’s BDS resolution against Israel. After writing the script and starring in the video, it has reached 32,000 views and counting, catching the attention of several other Zionist organizations.

Q. Do you feel millennials are apathetic?
A. It is disheartening to hear people say that millennials are apathetic. Apathy is a problem within every age group — but there are, in fact, many millennials working tirelessly to effect change in the political sphere. Dismissing millennials as apathetic can only cause more apathy. Why would anyone want to work with people who are already criticizing them from the outset? Instead, I believe that we must encourage everyone to stand up for what they believe in. We live in a democratic society that relies on passionate individuals to help steer the country — and its relationship with key allies like Israel — in the right direction.

Q. What are your future goals?
A. One of my main goals is to encourage the inclusion of Jewish, Israeli, and pro-Israel voices in the feminist movement. Unfortunately, anti-Semitic BDS proponents like Linda Sarsour claim that Zionists can’t be feminists, mirroring a larger issue of Jewish exclusion in the feminist movement. Zionism is the Jewish people’s civil rights movement, and we must reclaim our place within coalitions for social justice. We cannot remain silent because no one else will stand up for us if we do not make our voices heard.

Q. Who are some other leaders on campuses today?
A. There are wonderful student leaders throughout the country who dedicate themselves to defending Israel. My good friend Ben Schine, for example, started a highly successful pro-Israel club called Pirates for Israel at East Carolina University (ECU). Through student government, they passed a resolution that will help add more study abroad options for ECU students in Israel. Another resolution they helped pass denounced anti-Semitism and hateful anti-Israel rhetoric.

Q. How can people get involved?
A. Everyone has the opportunity to become an advocate for Israel. First, it is critical to educate people on the importance of defending Israel. To mobilize both adolescents and adults, I have personally spoken at synagogues, rallies, and community gatherings to raise awareness about the issues we face as Jews and the resources we have to challenge them. Organizations like ZOA, CAMERA, StandWithUs, and Hasbara provide countless resources to help young people advocate for Israel, including training conferences, trips to Israel, campus fellowships, and internships. I personally have helped ZOA create a database of fact sheets on a wide range of issues for Zionists of all ages to use as a resource. It is also important for everyone to follow ZOA and other Zionist organizations on social media because we often post important updates and calls to action.

Q. What does Zionism mean to you.
A. Anti-Israel groups attempt to conflate Zionism with racism; however, nothing could be further than the truth. Zionism is a liberation movement asserting the Jewish people’s right to self-determination in our historic homeland of Israel. I am proud to call myself a Zionist and will continue to unapologetically defend Jewish rights.

Q. Where do you see yourself in 20 years.
A. I plan on attending law school and ultimately using my legal expertise to run for political office. I have long been an advocate for certain policy changes, and it would be amazing if one day I am in a position to actually bring about those changes.

Mazel Tov Heather, all the honorees and to all those at the Zionist Organization of America for hosting a memorable event 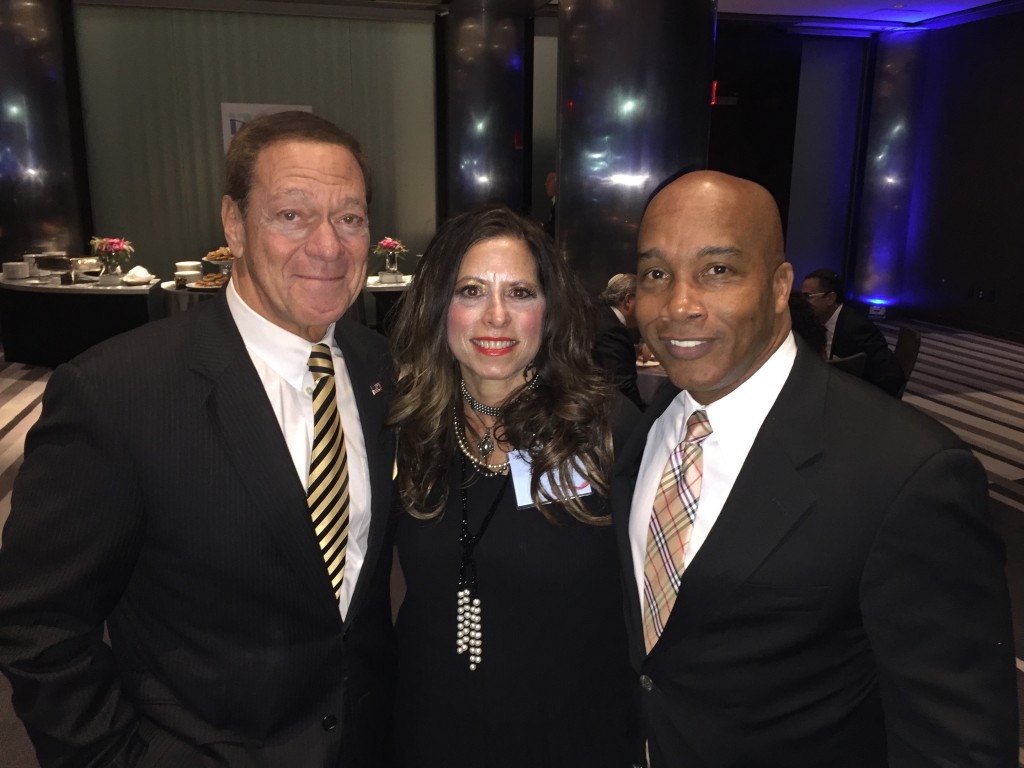 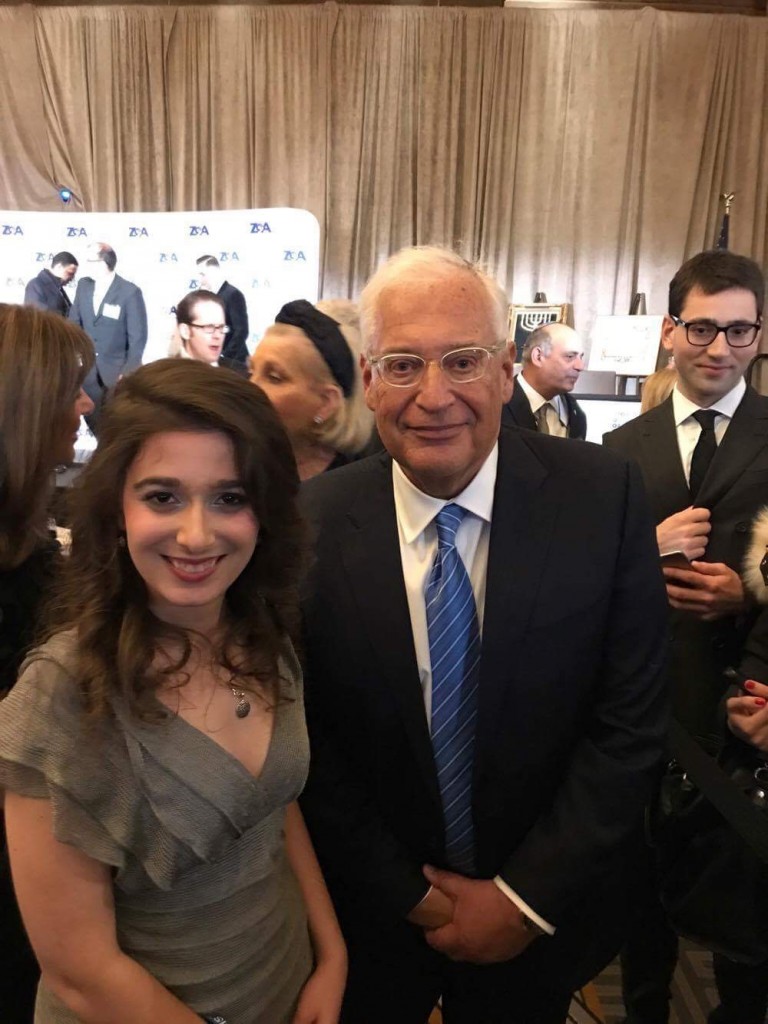 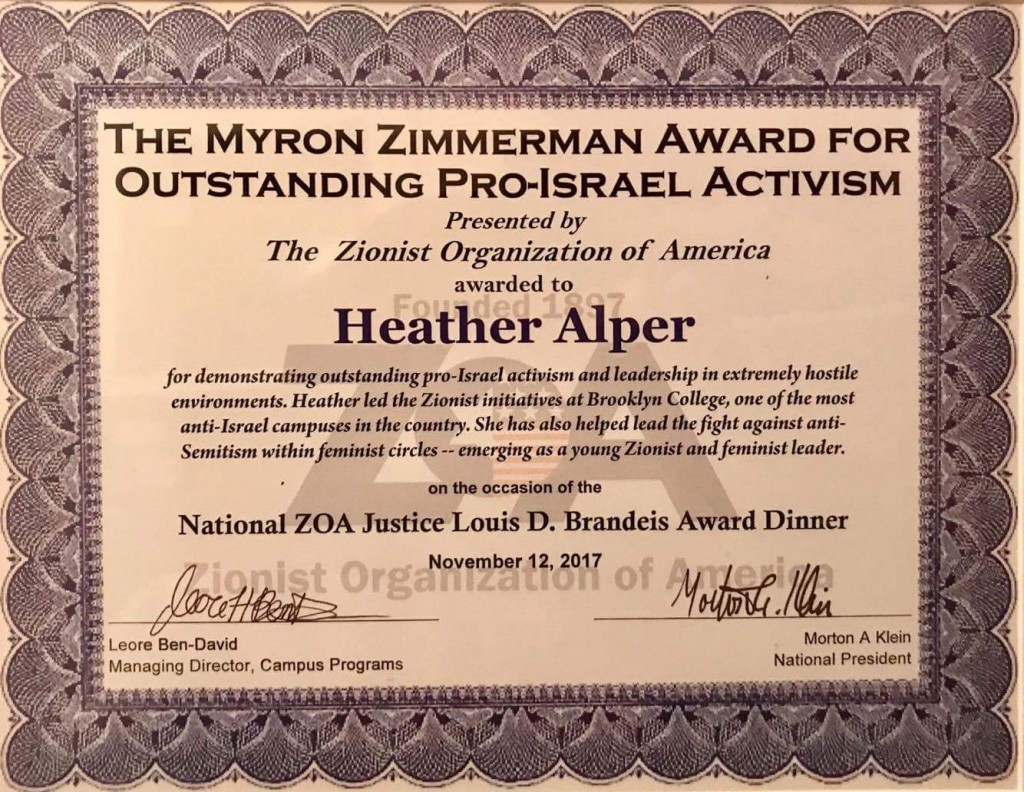 About the Author
Cindy Grosz is a Media Personality and award-winning Jewish Activist. Grosz is the host of Cindy’s Celebrity Corner. She can be reached at cindyscorners@gmail.com
Comments
Advertisement