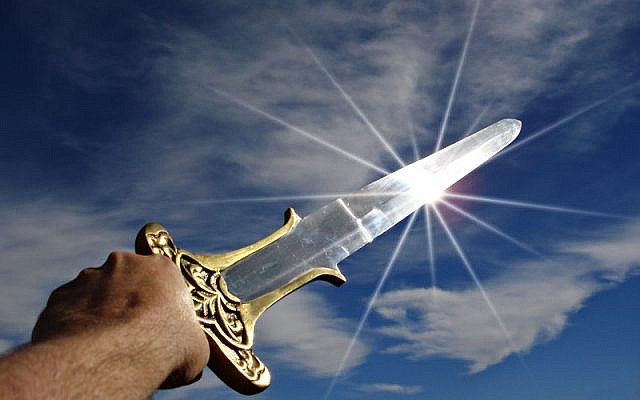 Methusaleh is best known for being the person with the longest lifespan explicitly mentioned in the Bible. However, a little-known tradition about Methusaleh sheds some light on the meaning of his somewhat obscure name. The name Methusaleh is comprised of the words met (“he died”) and ve-shelach (“and sword”). What is the significance of this name? According to the Midrash (cited by Peirush HaRokeach, Sifsei Kohen, and others), Methusaleh had a special sword upon which was etched the Ineffable Name of G-d. He used that sword to protect mankind by killing as many as 98,000 demons in one moment. When he died, this sword was buried with him (although, according to some sources like Imrei Noam and Zera Beirech, that sword eventually came to be in the possession of Abraham). According to this, he was called Metushelach because when he died, his sword also “died”.

R. Shlomo Pappenheim of Breslau (1740–1814) explains that the wordcherev is related to churban. Churban denotes the destruction of something which is not inherently damaged, but can be termed destroyed, as the result of a disconnection between itself and an outside element which it requires in order to flourish. For example, a “ghost town” which remains completely intact, but is nonetheless abandoned can be considered a churban. This is because the town itself is not damaged in any way, yet its lack of population precludes it from being considered a thriving settlement. It is effectively destroyed, while displaying no outward signs of destruction. By the same token, an especially dry and arid land is called charbah because its infertility is not due to a problem in the land itself, but results from its inability to receive outside water (e.g. if rainfall is a rarity). Given this way of looking at the root, R. Pappenheim explains that the word cherev means “sword” because the sword is an ancient tool for “population reduction” which results in the type of destruction known as churban. Linguists point out that an Akkadian word similar to cherev means a type of a plow.

The Malbim explains that a shelach is used for stabbing, as opposed to a cherev which he implies is used for slicing. Perhaps a shelach was something like a dagger. (The saber, which has a curved blade to allow for both cuts and thrusts, was only invented in later times.)

The common Aramaic word for “sword” in the Talmud is sayif. While the Targumim generally translate the word cherev into Aramaic as charba, in some cases it renders cherev into Aramaic as sayif (Targum pseudo-Jonathan to Ex. 20:22, Targum Jonathan to Jud. 20:2). R. Eliyahu HaBachur (1469–1549) explains that when cherev appears in the singular form, then it is translated as charba, but when cherev appears in the plural form, then it is translated as sayif. Why singular or plural should make a difference in how to translate the word remains a mystery to me.

R. Pappenheim explains that the wordsayifis derived from the word sof (“end”), because a sword has the power to bring an “end” to somebody’s life (see Gen. 18:23 and Isa. 7:20 for conjugations of sof used as synonyms for death). R. Avraham Vilner (1765–1808), a son of the Vilna Gaon (1720–1797), also offers the same explanation of the word sayif. As a side note, the Arabic name Saif/Sayef also means “sword”, and remains one of the most popular names in the Muslim world.

The common word for the knife used by a shochet (ritual slaughterer) is chalaf. Rashi (1040–1105), in his commentary to the Talmud (Yoma 36a and Zevachim 20a), and Rabbeinu Shimson of Shantz (1150–1230), in his commentary to the Mishnah (Middot 4:7), explain that the word chalaf means “knife” in Arabic. Indeed, the Arabic word chalaf refers to something sharp (likely derived from the Herbew word charif, with the r-sound being switched for the l-sound, as is quite common).

Nonetheless, R. Reuven Margolios (1889–1971) and R. David Kamin (d. 1922) ask why Rashi resorts to Arabic, and does not cite the Biblical precedent of Ezra 1:9 where the word machlifim appears, Rashi himself explains that it means “knives”. Moreover, R. Yom Tov of Seville (1260–1330), also known as Ritva (to Yoma 36a), asks this questions and adds that Rashi could have also cited the phrase kalil yachlof (Isa. 2:18), which refers to the future “cutting down” of idols.

Interestingly, while Rashi writes that chalaf comes from Arabic, R. Ovadiah Bartenura (1445–1515) asserts that it comes from Greek, although R. Yisrael Lipschitz (1782–1860) correctly notes that there is no such Greek usage.