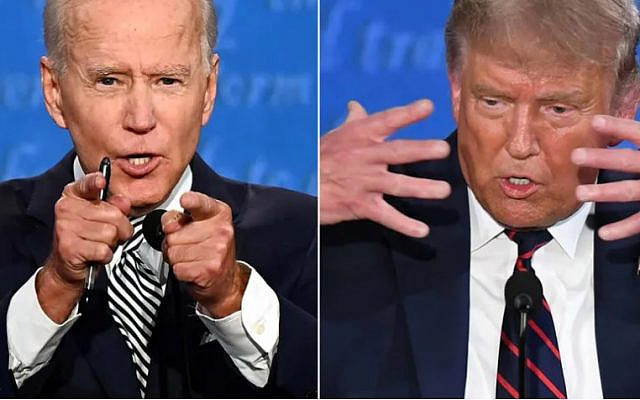 Last week’s presidential debate was embarrassing. Insults, yelling, and people interrupting each other are not the behavior one expects to watch at a presidential debate. Last week’s debate featured all three…and more. As an educator and parent who has witnessed children bickering with and at each other for decades, the behavior was familiar to me. It was clear what steps needed to be taken to stop the two grown men from arguing like children. Muting microphones might sound like a good idea. Anyone who has dealt with children who behaved like President Trump and Vice President behaved at their debate knows that both need to be taught how to debate civilly. As a Torah educator, I look to the Torah for direction on how to deal with my neighbor. The following lessons, cultivated from the Torah, are what I would tell President Trump and Vice President Biden if given the chance before the next debate.

The most important lesson is a principle taught in the Torah that should direct all our interactions with other people, “Love your friend as yourself.” (Vayikra 19:18) Likewise, the flip side is taught in that same chapter, “Do not harbor hatred for your brother in your heart.” (Vayikra 19:17) There are other principles that are good to live by, like, “The words of a wise man are heard in gentleness,” (Ecclesiastes 19:17) “Who is honored? He who honors others.” (Pirkei Avot 4:1) and “One should be as soft as a reed, not hard as a cedar tree.” (Taanis 20b) These principles are great guides for all people, especially someone who finds themselves in a contentious debate. Other principles that can help guide someone through a contentious time is Maimonides’s statement, “A scholar should love peace and pursue it.” (Hilchot De’ot 5:7) and Our Sages’ teaching, “One must treat others with as much respect as he treats his teacher.” (Yalkut Shemos 264)

The Torah doesn’t just offer principles, it gives detailed instructions on how to deal with other people; even addressing the tone of voice to use. Maimonides wrote, “A scholar should not shout or shriek while speaking, nor should he raise his voice too much. Instead, he should speak gently to all people. (Maimonides Hilchot De’ot 5:7)

There is a Torah prohibition – one of 365 – not to cause pain with words (Vayikra 25:17). All insults or harsh words meant to offend violate this prohibition. If our candidates would be careful to observe the prohibition not to offend, the debate would have been much shorter. That also leads us to another teaching of Maimonides, “A scholar should speak favorably of his fellow man, never mentioning anything that is shameful to him. (Hilchot De’ot 5:7)

The Torah doesn’t just tell us how to speak, but what and when to speak as well. These next teachings are germane for any debate, but especially one following the debacle last week; “A wise man does not interrupt his fellow’s words. A wise man does not hasten to answer. A wise man concedes to the truth. A wise man answers to the point.” (Pirkei Avot 5:9) “A scholar should not distort facts, exaggerate a situation, or minimize it. If a scholar sees that his words will be effective, and will be given attention, he should speak; if not, he should keep silent.” (Maimonides Hilchot De’ot 5:7)

The final lesson comes from the schools of Hillel and Shammai. The Talmud records that although they disagreed on hundreds of issues, they behaved with love and friendship towards each other. (Yevamot 14b). The Talmud questions why Jewish practice was established based on the school of Hillel’s and not Shamai’s opinion, and answers, “The students of Hillel were kind and gracious. They taught their own ideas as well as the ideas from the students of Shammai. Furthermore, they even taught Shammai’s opinions first.” (Eruvin 13b).

Debate doesn’t have to be contentious and it certainly shouldn’t be obnoxious. Debates should be held with civility and proper decorum. Both sides should consider the other’s opinion respectfully and then in a courteous manner explain why they disagree. They should present their argument constructively. This is how honorable people conduct themselves, and we should demand it from our candidates before their next debate. The candidates should demand it of themselves.