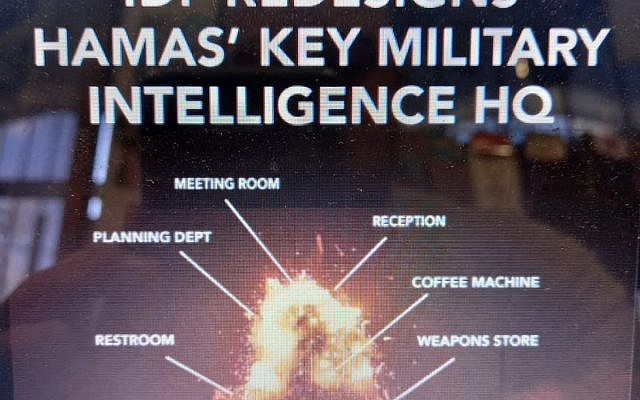 Parshat נח records the destruction of The Tower of Babel and the Flood which destroyed חמס (Hamas). We are hopeful that the current IDF operation will achieve the same results.

I must thank my nephew Danny who currently lives in South Africa for forwarding this picture of what appears to be the building Hamas used for headquarters to, among other things, send all those missiles into Israel to “wipe us off the map”. Unfortunately, Hamas continues to operate from the same PLO instruction book that failed miserably to destroy Israel in past wars.

In fact, what Hamas has just done is to perhaps mark the beginning of the end of their existence. I am basing my analysis on key facts which, in my opinion, support this view. There are other facts which I will save for future Blogs.

On this same day 73 years ago, David Ben Gurion announced the establishment of The State Of Israel. The 1948 (or First) Arab–Israeli War was the second and final stage of the 1947–1949 Palestine war. It formally began following the end of the British Mandate for Palestine at midnight on 14 May 1948; the Israeli Declaration of Independence had been issued earlier that day, and a military coalition of Arab states entered the territory of British Palestine in the morning of 15 May.

Today, all the Arab states do not have a military that existed in 1948. Therefore, a war by Hamas against Israel today will result in an Israeli victory, just like all the previous major wars Israel has fought against Arab armies.

Israel has been kind to Hamas to allow this building to stand until now. But the current missile attack is obviously the last straw for the IDF which responded by destroying that building.

It is also significant that the Tower Of Babel appears in Chapter 11 Verses 1-9 which has numbers that hint at the Twin Tower 9/11 Attack. Only, this time, the building that was destroyed is in enemy territory.

The Flood Also Appeared In Parshat Noah Because Of חמס (Hamas)

The Torah translates Hamas as robbery or larceny that filled the earth. But I strongly feel this applies to today’s Hamas in a different way. Israel must now halt Hamas from any further attacks on my people.

Israel has wanted a genuine peace with all its neighbors since it was established, and many years before. Hamas refused before and even now by continuing sending rockets and terrorists into our country.

We all have had enough of Hamas and its refusal to make peace. It needs to be taught a lesson it will never forget. I have been hearing airplanes early this morning obviously on their way to attack Hamas targets.

With G-d’s help, combined with IDF forces, we all hope Israel achieves a speedy victory with no further casualties to its soldiers or my fellow Israelis.