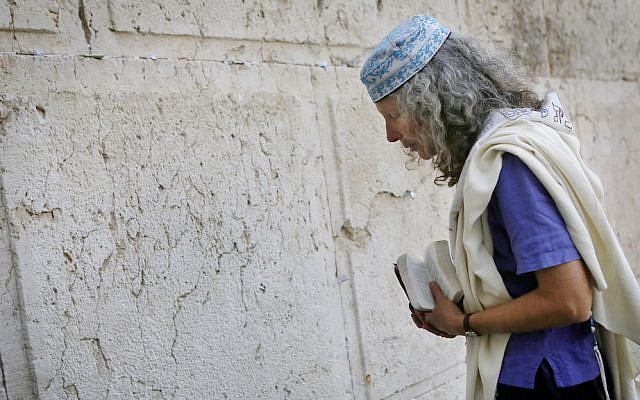 Religious Jewish women which are part of the Women of the Wall organization wear tfillin (prayer shawls) and tallit as they read from the Torah and pray at Robinson's Arch, near the Western Wall in Jerusalem. The WOW organizes women's prayer groups at the Western Wall at the start of every new Jewish month (Rosh Hodesh). Jewish ultra orthodox communities oppose women's singing in the presence of men, reading from the Torah, and wearing the ritual garments and objects traditionally associated with men. March 12, 2013. Photo by Miriam Alster/FLASH90

When the government decided to surrender to ultra-Orthodox pressure and renege on its commitment to ensure egalitarian prayer at the Wall, I thought of Avraham Sela. Avraham, a veteran professor of international affairs at Hebrew University, is a former paratrooper who was wounded in the battle for Jerusalem. Born in Iraq, he came to Israel as a boy with his family. Growing up, he longed to see the Western Wall, which Jordan barred to Jews. It was one of the dreams of my life, he once told me.

At 2 AM on June 6, 1967, day two of the Six Day War, Avraham’s battalion crossed no man’s land and charged the fortified Jordanian position known as Ammunition Hill. As he approached the hill, he was hit by machine gun fire and evacuated in serious condition.

He heard about the liberation of the Wall from his hospital room, with a mixture of elation and depression. The moment he had longed for had finally come; yet he hadn’t been privileged to be among the liberators.

After several months in the hospital, Avraham was moved to an IDF rehabilitation center. Can we stop at the Wall? he asked the driver.

Bent in agony, Avraham approached the Wall. He was so overcome with emotion that the Wall itself seemed a blur. Though each step was painful, he shuffled forward.

And then, just as he was about to touch the stones, he heard a voice. “Bachur!” Young man! “Put on a kippah!”

Avraham froze. In his excitement to reach the Wall he’d forgotten to cover his head. The abrupt tone of religious authority stunned him. Profoundly offended him. He who had so anticipated this moment, who had been ready to give his life for Jerusalem, to be treated with such contempt – He turned his back to the Wall and didn’t return.

Avraham Sela’s story is the antithesis of those moving accounts of secular paratroopers crying at the Wall. It’s a story I wanted to forget: In my reverence for the moment of our reunion with the Wall, Avraham’s experience was an intrusion. But it continued to haunt me.

Avraham’s story is profoundly disturbing on two levels. The first of course is how the religious establishment took control over the Wall and alienated large numbers of secular Israelis, many of whom no longer go to the Wall at all. But the second, no less disturbing part of the story is how so many secular Israelis allowed the Wall to be taken from them by simply withdrawing.

Even Itzik Yifat – the young man at the center of David Rubinger’s famous photograph of the paratroopers at the Wall – once confessed to me that he feels uncomfortable at the Wall and wonders about his place there.

The Reform and Conservative movements, led by the Women of the Wall, chose not to withdraw but to insist on their place at the Wall. In the end they acquiesced to the government-brokered compromise that granted them access to a part of the Wall south of the plaza, while leaving the main area under the authority of the Orthodox rabbinate.

It was a noble compromise: The liberal denominations accepted with humility a secondary place at the Wall, but that at least recognized their right to be part of Israel’s public space; while the Orthodox seemed to accept an organized non-Orthodox presence at the Wall for the sake of Jewish unity.

But then the haredi or ultra-Orthodox parties revolted. And the government cynically withdrew its own compromise.

In fact the government’s surrender is part of a pattern. In 1997 then-Finance Minister Yaakov Neeman negotiated a deal to create government-sponsored conversion classes for Russian immigrants who weren’t halakhically Jewish. According to the Neeman Commission, rabbis from all three denominations would teach candidates for conversion, while the conversion itself would be handled by a court composed exclusively of Orthodox rabbis.

The compromise was intended to both ensure that Russian immigrants would be absorbed into the Jewish people and that all parts of the Jewish people would be part of the process. It was a masterful solution, at once honoring Jewish unity and halakhic integrity.

But it never happened, because the haredi parties pressured the government to rescind the plan.

Like the Neeman Commission, the government’s initial compromise over the Wall was a bold attempt to uphold Jewish unity while still granting Orthodox preeminence. And like the Neeman Commission, the compromise over the Wall was destroyed by haredi politicians for whom the unity of the Jewish people is secondary to upholding the most rigorous interpretation of Jewish law.

For all the haredi accommodation to the state of Israel in recent years, the ideological argument between Zionism and the haredim remains profound. Haredim are willing to risk Jewish unity to uphold what they see as the integrity of the halakhic process. Zionists see maintaining the basic and fragile unity of the Jewish people as their primary commitment – indeed the core of their Jewishness.

Zionism was never only about creating a Jewish state; it was about defining Jewish identity. Zionism’s definition is peoplehood. The noun is “Jew;” all other identities – religious and secular, Orthodox and Reform, left and right – are adjectives. In an era when the most basic consensus about Jewish identity is unraveling, Zionism’s purpose is to uphold peoplehood as the neutral binding ground of Jewishness.

From its inception, mainstream religious Zionism implicitly agreed. It reconciled its commitment to peoplehood and halakhah by emphasizing the religious imperative of peoplehood. Because Judaism is a particularist faith intended for a particular people, unlike the universal faiths of Christianity and Islam, strengthening peoplehood is a religious category, a precondition for the fulfillment of Judaism itself.

That is why Yaakov Neeman, a religious Zionist, devoted himself to seeking compromise with denominations whose religious observance he found personally objectionable. And that’s why an earlier generation of religious Zionist leadership – unlike its political leadership today, which has yet to challenge the haredi ultimatum on the Wall – supported compromise with the non-Orthodox denominations.

The Jewish people owes much to the haredi world – for its heroic efforts in salvaging Jewish life after the Shoah, for its self-sacrifice, for its dedication to Torah. But that gratitude cannot obscure the deep ideological conflict that exists between the haredim and the mainstream of the Jewish people, including many religious Zionists.

The compromise over the Wall is a Zionist act – accommodating all parts of the Jewish people in our sovereign space. The haredi community must not be allowed to sabotage the essence of Zionism in our time – which is to uphold the integrity of Jewish peoplehood.

We returned to the Wall in a moment of unprecedented Jewish unity. The events of 1967 united the Jewish people in a shared emotional trajectory – from dread for the fate of Israel in the weeks before the war, to relief with Israel’s preemptive strike, to euphoria when the paratroopers reached the Wall. Perhaps, in some spiritual sense, the restoration of Jewish unity, however fleeting, enabled the restoration of the unity of Jerusalem.

From extensive conversations over the years with the paratroopers who were at the Wall on the morning of June 7 1967, I know that their overwhelming sentiment was gratitude for the privilege of having restored the Wall to the Jewish people – the entire Jewish people.

Now, though, in the fiftieth year of the liberation of the Wall, the government of Israel has told a majority of Diaspora Jewry that it has no organized place in our most resonant public space.

If unity helped us return to Jerusalem, what does our squabbling over the Wall portend?

Yossi Klein Halevi’s book Like Dreamers: The Story of the Israeli Paratroopers Who Reunited Jerusalem and Divided a Nation, has just been published in Hebrew by Dvir, as K’cholmim.