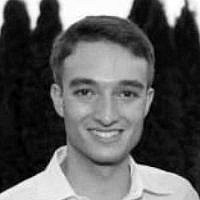 The Blogs
Aaron Zucker
Apply for a Blog
Advertisement
Please note that the posts on The Blogs are contributed by third parties. The opinions, facts and any media content in them are presented solely by the authors, and neither The Times of Israel nor its partners assume any responsibility for them. Please contact us in case of abuse. In case of abuse,
Report this post.

When the first-ever Haaretz Conference on Peace was evacuated last Tuesday, the irony was too perfect to pass up.

Following a truly horrific week, and as the Israeli army called up 40,000 reservists amid rocket fire from the Gaza Strip, hundreds had gathered in support of a two-state solution at precisely the moment when it must have felt the farthest away.

Some onlookers decried the implied absurdity of discussing peace while rockets were falling outside. And when the peace forum was literally interrupted by war, as air raid sirens forced attendees to flee for shelter, their critics delighted in the joke. “Welcome to reality!”

Yet the question remains, if not now, when? When is the proper time to seek a resolution of the Israeli-Palestinian conflict if not when the need is most pressing? When Israel goes to war to stop indiscriminate rocket fire from Gaza, those of us in the pro-Israel community stand together in solidarity. When three Israeli boys are murdered in the West Bank, we pray for their families and our hearts break.

Too many Israelis and American Jews have given up on that hope. After years of terrorism and failed peace initiatives, they’ve accepted a reality in which Israel can’t end the conflict, but simply muddles through. In this world, every terrorist attack and Gaza rocket is seen as proof that there is no partner on the other side and that peace is a risk that Israelis can’t afford.

Days like today should shatter that illusion. The latest crisis in Gaza proves that there may be moments of quiet, but there is no status quo. For years, Israel’s security establishment has warned that its continued control of Palestinian territory no longer enhances Israeli security–it poses an existential threat. That was the message from Israel’s former security chiefs in the 2012 Oscar-nominated documentary The Gatekeepers, and even admitted privately by the current head of Mossad last week. With international opposition to the occupation growing, and Israel’s future as a Jewish democracy in jeopardy,  “We are winning all the battles, but we are losing the war.”

Now, that doesn’t mean that Israel shouldn’t respond forcefully when confronted with hundreds of Gaza rockets, as it is today. Rogue terrorists will threaten Israel, with or without a peace agreement. But that doesn’t change the fact that there is not and never will be a military solution to the conflict–only a political one. Israel can “mow the grass,” but until it addresses the roots, the grass will grow back thicker.

These military escalations only deepen our hopelessness in the future, and its stranglehold over our politics. For Hamas, this is deliberate, its modus operandi.

Extremists realized long ago that while moderates on both sides push for peace, they can be silenced with a kidnapping, a murder, a single, well-timed act of violence.  “See, we told you so,” cry the extremists in Israel. And then Israel hits back, and Palestinian civilians are killed in the crossfire. “See, we told you so,” cries Hamas. The Palestinian child who lost his sister won’t hear that Israel tried its best to avoid casualties. And the familiar cycle begins again.

For now, Israel has a partner in President Abbas–one who recognizes Israel, believes in two states and risks his life to fight terrorism. But each escalation weakens his standing. So long as Hamas can show Palestinians that it draws more political strength from attacking Israel than the Palestinian Authority does from negotiations which produce nothing, there will be many more sequels to “Operation Protective Edge.”

The real irony of last Tuesday’s evacuation is the same that allowed the assassination of an Israeli prime minister to extinguish the promise of Oslo, or the suicide bombers of the Second Intifada to set back peace negotiations by half a decade: It is the very horrors of the Israeli-Palestinian conflict that are preventing good people on both sides from ending it. While it should drive them to action, far too often it frightens them into believing that peace is impossible.

We’ve earned the right to feel that fear. It’s more than justified. But it’s trapped us in a cycle that’s going to destroy us, if we don’t break free.

So as sirens echo across Tel Aviv and Israel contemplates the efficacy of a ground invasion, there has never been a more important time to push for a peace agreement. Now–when our wounds are fresh, before they fade and we accept them. Nothing would deal a more crippling blow to Hamas and what it stands for.

Which is why it wasn’t naivete that drove hundreds of Israelis to the Haaretz Conference last week. It was courage. The crowds in the David Intercontinental Hotel hadn’t forgotten about Naftali, or Eyal, or Gilad, or Muhammed. They were honoring their memory in the hope that their lives were worth more than fuel for a cycle of suffering. In the hope that their deaths could be among the last.

And when the attendees filed back into the hall to resume the program, it was a sign that maybe we haven’t given up just yet.

About the Author
Aaron Zucker is communications associate at J Street, the political home for pro-Israel, pro-peace Americans. He previously worked as an intern at the White House, the Senate Committee on Foreign Relations and the Council on Foreign Relations. He has a BA in international relations from Tufts University.
Related Topics
Related Posts
Comments