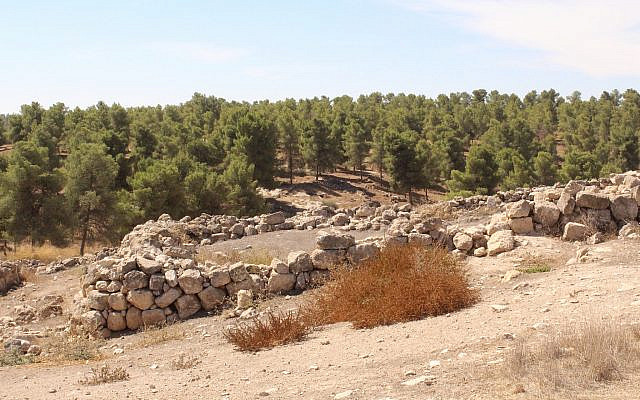 An indigenous people knows when to plant trees in its land, and when to refrain from planting.

Shemitah, the sabbatical year that comes after six years of agricultural work, is a time to refrain from planting. And yet Jews were planting trees this week leading up to Tu Bishvat, some for life, and some for death.

This past week leading up to Tu Bishvat, KKL-JNF began carrying out plans to plant an unnatural forest in the middle of the desert. The lands of the village of Sa’wa were were duly but (by the measure of human rights) illegally confiscated by the state. Whatever ostensible reasons for the planting, the reason is to hem in the Bedouin, to deprive them of lands for grazing, to squeeze their way of life out of existence. The Bedouin protested, massively, creating days of disruption and, with God’s help, fighting one more encroachment of colonizers against indigenous people. (Below I address the lie that the Bedouin are “squatters.”)

You may say, but isn’t Judaism an indigenous tradition, isn’t it the indigenous tradition of Canaan-Israel-Palestine? Isn’t Torah uniquely tuned to the ecosystems and agriculture of the land? I think so, and I’ve written often about that. But the JNF is not indigenous. It doesn’t matter if or that the Jews may in some senses be indigenous to the land. There is no distinction, no daylight, between the way the JNF behaves and the way the agents of a colonizing power would behave if its aim were to uproot the indigenous people and destroy their way of life. (Look below for ways to contact the JNF and tell them, NO!)

What about climate change? Did you imagine the JNF’s plans can be justified in the name of the bigger goal of fighting global climate disruption? If so, you need to know that adding more forests doesn’t always mean adding more life. Planting a dark green forest in desert is no win for the climate. Desert has a high albedo — most of the sunlight that hits desert is reflected back into space. Forests like the Yatir forest that, which JNF planted to wipe out the existence of the Bedouin village of Atir, have a very low albedo. In fact, the gain from sequestering of carbon in their trunks is almost certainly erased by the change in albedo. And that kind of forest — monocultures of the same (wrong) species, lacking enough wildlife and tree diversity to make them living and sustainable ecosystems — will not last long enough to help the climate anyway.

That’s one kind of planting. The other kind of planting was in the West Bank, where Israeli Jews were helping Palestinian farmers plant olive trees in place of trees that had been destroyed by the worst Israeli settlers. It’s more symbolic than anything — it will take decades for those trees to become fully productive — but it’s a symbol we need.

You don’t really need to know much about context. Anyone tears up or burns a fruit tree to make war — especially against farmers, but the Torah teaches, against anyone — you know without doubt that their Torah is a deadly poison.

Seven years ago, I did the similar work in the West Bank. Since it’s perfectly fine for non-Jewish farmers to plant in the shemitah year, I helped by doing all the work short of planting — but Rabbi Michael Marmur, chairperson of Rabbis for Human Rights (rhr.org.il), wrote about explicitly helping to plant, because the Torah of life comes before the rule and because the rule is meant to serve life.

Here are Rabbi Michael Marmur’s words, from the RHR newsletter:

“This morning I broke the law. It was in a field near Awarta in Samaria, close to the Palestinian city of Nablus, and even closer to the Jewish settlement of Itamar, perched on the hill overlooking us. Some 60 volunteers with Rabbis for Human Rights helped Palestinian farmers plant young olive trees we had brought them, replacing in a symbolic way some of those sabotaged and vandalized at the last harvest (and many previous harvests) by Jewish settlers. The vandals acted in the name of the Torah. So did we.

“The law I broke is an ancient one. Every seventh year the land is not to be cultivated, part of a sabbatical worldview designed to remind us that we do not have a mandate for incessant exploitation.

“Torah is described as a Tree of Life. To act in its name should be to plant the possibility of life and decency and respect. I came here to plant a tree – not bigotry, not idolatry, not sophistry. Rather – an olive tree, symbol of the hopes of good people to live peaceful lives.

In the words of Kohelet (Ecclesiastes), there is “a time to plant and a time to uproot, eit l’ta’at v’eit la’akor.” It is time to uproot any settlement that harbors the Torah of death from the poison tree of nationalism and racism. It is time to stop planting forests whose work is a work of theft and destruction. May it be the will of the Holy One to uproot the settlement of Itamar completely and cause its people to do t’shuvah. May it be the divine will that the Yatir forest return to its natural state, and may all the lands stolen from the Bedouin be rematriated to them.

WHO ARE THE BEDOUIN? The Bedouin are not squatters. Their traditional legends trace their lineage to Shem (Noah’s son). They are not nomads, though they may practice “transhumance” – bringing flocks to different pastures for different seasons.

There are several types of places the Bedouin have lived in the Negev.

1) Places where a particular Bedouin tribe lived before the State of Israel existed and where they still live. Some of these places are recognized villages, and some not.

2) Places where the tribe was moved after the IDF took their land in the southern Negev and transferred them to what was supposed to be a permanent home in a new place. In most of these places, the Bedouin made new homes, but the government, despite the IDF’s promises, never recognized their villages, never connected them electricity or water or medical services, and in general has mistreated them in the most extreme ways possible (like citing toxic waste dumps nearby — Wadi el-Naam is one example.)

3) Towns that the Bedouin were pressured to move to in order to get them off the land that they lived on and make them more “civilized”. In those towns the Bedouin largely had to give up their way of life. (That sort of “program”, by the way, is characteristic of the actions of a colonizing agent against an indigenous.)

4) Places the government successfully forced the Bedouin to leave, in many cases despite long-standing claims to the land, often with the excuse that JNF-KKL was re-foresting the land. In general, JNF forests have been used as excuses to demolish homes and ways to deprive Bedouin of pasture lands (planting a pine forest on pasture land is ruining it for pasture), and also as ways to erase the facts of human settlement that were left on the ground after the Bedouin were forced out. (Atir, mentioned above, is one example, now destroyed and covered over by the JNF’s Yatir forest).

WAYS TO REGISTER YOUR PROTEST WITH JNF, followed by some news links:

Don’t forget to contact KKL-JNF on Tu Bishvat and protest their tree planting in the Negev that incited protests last week, in honor of the values of Tu Bishvat, integrity, Torah, and a sustainable world, and tell them NO.

Regional offices:
https://www.jnf.org/menu1/jnf-in-your-area/northern-ca
(This link displays one of the offices but gives you a look up tool for offices around the country under “Change Location”.)

Israel Office
206 Jaffa St.
Jerusalem, 94383
Israel
972-2-563-5638
contact@kkl.org.il (Devora)
Public inquiries: pneyot-tzibur@kkl.org.il
Fill out a form for planting with JNF tell them why you’re not going to plant anything with them: https://www.kkl-jnf.org/tourism-and-recreation/plant-a-tree-israel/