The Blogs
Jonathan R. Beloff
Researcher of the African Great Lakes
Apply for a Blog
Advertisement
Please note that the posts on The Blogs are contributed by third parties. The opinions, facts and any media content in them are presented solely by the authors, and neither The Times of Israel nor its partners assume any responsibility for them. Please contact us in case of abuse. In case of abuse,
Report this post.

Football is a fascinating sport, because it brings people together from all walks of life. Well, except for the United States. I really wanted to become a football fan, because of Rwanda. I mentally planned for my second year during my PhD studies; I would travel back to Rwanda. Based from my previous trips, I and wanted to add another aspect, the football element, to better understand the daily lives of Rwandans. My interest of the sport came when I first moved to London in 2013. Prior to my move, I asked the few football fans I knew about which team I should support. There was only one person I knew who was a big fan. It was an old university professor who suggested supporting Tottenham Hotspurs like himself. In all honesty, including some shame, I wanted to keep my options open. I mentally decided that only after watching a handful of teams, I would choose my team. Once in London, a very close and dear friend introduced me to Chelsea Football Club, as it was her favourite team. After watching a few games with her, I began to appreciate the style of play and excitement for Chelsea’s strict defence and breakaway plays.

Being a Chelsea fan illustrated both isolation and acceptance during my last time in Rwanda. The isolation came from the country being saturated by Arsenal and Manchester United fans. Nearly every Rwandan football fan I knew was a supporter of one of those two teams. Most of the political leadership supports one of these two teams. For example, President Paul Kagame is a loyal Arsenal fan. When I returned in July 2014, one Rwandan friend of mine after hearing I became a Chelsea fan, laughed and joked that I picked the wrong team to support. He kept on insisting that I must support Manchester United. We would always laugh it off until game day when things became a lot more serious. Those days were when things became interesting.

Some of my greatest memories during the six-month stay in 2014 were of watching football matches with dozens to hundreds of Rwandans. It was during one of my interviews with a military official when I realized how important football was going to be during my stay. After going through the usual security procedures, a soldier brought me to a waiting room for me to stay in until the official was ready. I sat down and mentally prepared for what I was going to ask in the interview. Before leaving the room, the soldier turned on a large television hanging in the room. He said, “We heard you are a Chelsea fan. So, let me put on the Chelsea (television) station.” I could not hold back my laughter as we both broke out in smiles and then talked about the chances for Leicester to survive relegation. It was both comforting and eerie how much people knew of my Chelsea support. However, I grew into the role and enjoyed every minute of it.

Sometime last October; I went to a restaurant called, Car Wash, with a close friend of mine to watch Arsenal play Chelsea. The friend was a diehard Arsenal supporter. We were planning to watch this match for over a month! Once at the restaurant, I noticed that my Arsenal loving friend was not alone as over 125 fellow Rwandan Arsenal fans were attending. It was easier to notice me in the crowd beyond the typical Caucasian skin colour, because of all the Chelsea blue I was wearing. So many of them wanted to wage financial bets that Chelsea would lose to the ‘great’ Arsenal. I never agreed to any of the bets, because of my negative attitude towards gambling. But if I did, I would have collected a good amount of Rwandan francs! While eating my goat brochette and baked potatoes, I witnessed Chelsea beat Arsenal 2-0. All the Arsenal players were furious with many wanting to flip the tables. I, along with perhaps five other Chelsea fans, laughed at how bad Arsenal played. After the match, people congratulated me and we all laughed. The restaurant’s manager came up to me to give me a high five, as he was a secret Chelsea fan!

I spent most Sundays at another restaurant called Buffalo Village, near Kisimenti, to watch the matches. It was there, where I would most likely watch matches dressed in my blue Chelsea hat, shirt and scarf. Just after the second match, the restaurant’s staff began to plan for my arrival. They made sure that they aired the Chelsea matches and reserved a spot for me to sit and eat. The incredibly warm and caring staff would know exactly what time to serve me my food. It was usually during halftime. During game time, they knew I would be just staring at the television. After one match when Chelsea tied, the restaurant’s owner and personal close friend came to me with his wife and joked about the draw in order to make me laugh. 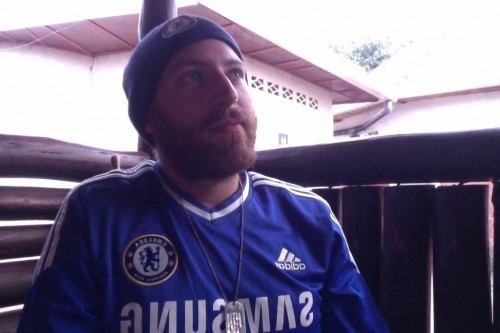 “It was easier to notice me in the crowd beyond the typical Caucasian skin colour, because of all the Chelsea blue I was wearing.”

Perhaps the greatest memory of watching Chelsea matches in Rwanda was at the Top Tower Bar and Casino. When one asks for a western style sports bar, this is Rwanda’s answer. Its customers were different from the other two places. These Rwandans were a bit more financially better off than the average person. This detail did not impact the experience as I was immediately seen as a family member of the usual attendees. Most were Arsenal or Manchester United fans, but unlike the Car Wash there were a bit more Chelsea supporters. Every time entering the bar, I would hand my bag with a smile to the security desk. The security guys would ask me to predict the upcoming scores with a lot of laughter. Afterwards while walking up to get my Mutzig (a type of beer) everyone would yell out, “Yohani”! (This is my Rwandan name, which is on the back of my favourite Chelsea shirt.) Whenever Chelsea scored a goal, everyone would chant my name and stick out their hands for a high-five. I became friends with so many of those people as they expected me every week.

Now the season for English football is coming to a close. Chelsea, after beating Crystal Palace, is English Premier League Champions. I celebrate this well fought season that had its wins and loses. Mostly, I think of all the people I celebrated the first half of the season with. The Rwandans, who stopped being strangers and instead became my friends while we celebrated, screamed and cheered our teams on.