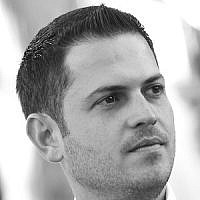 The Blogs
Michael Pearl-Teplitsky
Apply for a Blog
Advertisement
Please note that the posts on The Blogs are contributed by third parties. The opinions, facts and any media content in them are presented solely by the authors, and neither The Times of Israel nor its partners assume any responsibility for them. Please contact us in case of abuse. In case of abuse,
Report this post.

The UN continues its slow but steady process of becoming an irrelevant and anti-western body, promoting ignorance and hatred, rather than peace and freedom.

Last Thursday, UNESCO, United Nation’s educational, scientific and cultural organization, has canceled an exhibition entitled “People, Book, Land – The 3,500 Year Relationship of the Jewish People and the Land of Israel”. The Exhibition was created by the Simon Wiesenthal Center along with UNESCO, and was scheduled to be presented next week at the organization’s headquarters in Paris.

The official reason for the cancelation was “ensuring that current (peace) efforts in this regard are not endangered”, as quoted by organization’s director-general, Irina Bokova. The real reason was pressure from the Arab League and the representatives of the Palestinian Authoriy.

As frustrating as it may be, this outrageous decision is only a link in a long chain of anti-Israeli resolutions and statements. According to UN Watch organization, there were 46 UNESCO resolutions against Israel Since 2009, while Assad’s bleeding Syria has received only one; and other “liberal” states such as Iran, North Korea and Sudan weren’t even mentioned. This is the time to underline once more that UNESCO is supposed to deal with education, culture and science, not human rights.

It is no secret that there is an ongoing dispute between Israel and the Palestinians on the definition and status of Judea and Samaria. However, even the strongest supporters of Israel’s withdrawal in the EU and the United States; do not deny the connection between the Jewish people and the land of Israel. By canceling the exhibition, UNESCO joins Israel’s worst enemies in re-writing history by disconnecting the Jewish people from its homeland.

That very same day, UN’s headquarters in New York has hosted a special meeting launching UN General Assembly resolution A/68/12, 2014: The International Year of Solidarity with the Palestinian People. 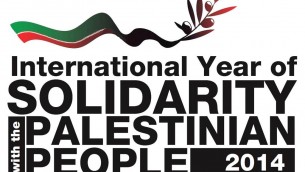 Every year, the UN elects a theme that will lead next year’s activity. After years of focusing on important global issues such as International Cooperatives (2012), Forests (2011) and Biodiversity (2010), the UN has decided to dedicate 2014 to one single nation: the people of Palestine.

One cannot help but wondering- why was this nation singled out? Are they the most threatened and miserable nation on earth? Well, apparently not: the same month that this resolution was adopted (November 2013), some 2,500 Syrians and 1,000 Iraqis were killed from violence, compared to 4 Palestinians killed in clashes with the IDF. The truth is that this decision had nothing to do with reason or logic. Like in most similar UN resolutions from the last few years, the leading reason was bashing Israel.

It is not a conspiracy theory. It is the reality, based on a basic mathematical fact: the Arab-Muslim bloc is the largest coalition in the UNGA. For instance: the hereby mentioned resolution from November was supported by a solid majority of 110 states, while the other 7 opposed and 56 abstained (mostly western countries), didn’t stand a chance. 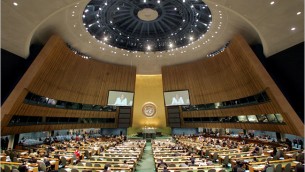 This troubling statistics is joined by a series of strange, or rather incomprehensible appointments, such as Iran as the rapporteur in the DISEC (Disarmament and International Security Committee) and Qaddafi’s Libya as the chairman of the Human Rights Commission. Of course, all that can be added to the recent decline in America’s power or even relevance in the International politics.

Martin Luther King Jr. has once stated that “An unjust law is a code that a numerical or power majority group compels a minority group to obey but does not make binding on itself”. The new UN is turning into merely a tool for laundering human rights violations in some countries, while imposing them on others, by using the advantage of the majority. This makes its resolutions and bodies both unjust and irrelevant.

US President, Franklin D. Roosevelt, wrote that the purpose of the UN will be to “organize the peace-loving nations… to assure that no other would-be aggressor or conqueror shall even get started”. Almost Seventy years later, it seems that the UN is the exact opposite of his expectations.

About the Author
Michael is a licensed attorney, who holds a master's degree in International Relations and a Bachelor of Laws degree from the University of Haifa. He currently works as a Senior Parliamentary Assistant at The Knesset, and is also active in the field of public diplomacy and Israeli advocacy. Michael headed the University of Haifa Students Union as Vice Chairman and C.E.O. He is a reserve officer in the rank of captain.
Comments