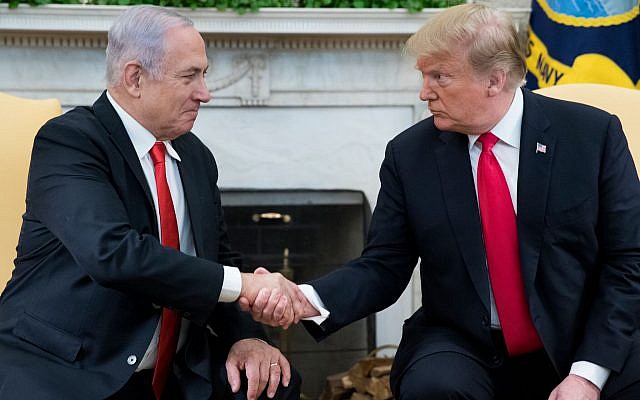 The discussion about attaching strings to American aid to Israel that developed among Democratic party candidates at the J Street conference last weekend has evoked yet another minor furor in Israel. The Likud caretaker government’s denunciation of the mere mention of such a possibility was echoed not only in broader political circles in the country, but also in the mainstream media.

This reaction is somewhat bewildering if not disingenuous. It totally ignores a long record of past US attempts to tie support for Israel to demands for an adjustment of its policies (the George W. Bush administration’s refusal to provide loan guarantees during the mass immigration from the former Soviet Union in the early 1990s until the Shamir government halted settlement construction is just one notable example). It also displays a misunderstanding of the impact of the Trump-Netanyahu relationship on the American public, especially in an election year. During its tenure, the current administration in Washington has done virtually everything possible to undermine bipartisan support for Israel, and to make the nature of the Israel connection into a source of major public contention.

What, precisely, are candidates for the highest office in the country to do, when they are strongly supportive of Israel’s security, yet strenuously opposed to the president’s decision to establish an embassy in Jerusalem, to cut off aid to UNRWA, to back Israeli annexation of the Golan Heights and to applaud Israel’s intention to annex the Jordan Valley? How, in these circumstances, can they advance their belief in a just and lasting solution to the Israeli-Palestinian conflict, based on recognition of the right to self-determination of both peoples on the land? What are they expected to propose to the American public as a strategy for dealing with one of the most prolonged and seemingly intractable issues on the global agenda, especially when the United States has lost most of its clout — not to speak of its credibility as an honest broker — in the region? How are they meant to respond, when the present government of Israel, touted as the “only democracy in the Middle East,” systematically tramples on minority rights, selectively suppresses civil liberties and curtails dissent? And can they remain silent when Israel continues to rule over another people against their will, without granting them elementary civil rights?

These are issues that relate not only to Israel, but to the very nature of democratic values and behavior. In many different ways, they lie at the forefront of the American political debate today. They touch on fundamental democratic principles, how they are protected, and the international obligations they entail. It is hardly surprising that they are surfacing at this juncture. The way they play out is critical for understanding not only the resilience of Israel’s connection with the United States in the years ahead, but also, and perhaps more significantly, its quality.

Several approaches to this dilemma have emerged and are visible on various sides of the American political divide. The first, represented by the current occupant of the White House, is to support Israel unreservedly — as long as Netanyahu is in office and their shared vision of populist nationalism serves his interests and those of his constituents — even if doing so means diverging from long-standing American positions upheld over the years by his predecessors on a bipartisan basis.

The second, visible in both Republican and Democratic circles, continues to offer broad backing to Israel, partly because the alternatives in the area are considered to be so much more dangerous and partly because they still consider Israel to be a critical strategic asset for the United States. Joe Biden’s vocal resistance to any hint of tying support to a change in Israeli policies is a case in point. His position was echoed at the J Street conference by former secretary Julian Castro and by Senator Michael Bennett, who both unequivocally reiterated what has been a Democratic party position for decades. In many respects, these contenders have chosen, on balance, to put their head in the sand: they truly believe that what is going on in Israel does not provide sufficient cause for any serious reassessment.

Senator Amy Klobuchar, undoubtedly a staunch proponent of the continuation of the special American-Israel relationship, epitomizes a third approach — one which seeks to avoid addressing the knotty issues. Her appearance at the conference consisted primarily of ducking repeated questions related to how she would handle the conflict and problematic Israeli activities. Her insistence on not relating to any possible negotiations at this stage mirrors the stance of many Americans (including Jews), who exhibit a growing reluctance to deal with the complexities of what is taking place in and around Israel. Tellingly, she received a distinctly lukewarm response.

A fourth strategy, one which attempts to grapple with the questions raised not only by recent Israeli actions, but also by the turn in the nature of the link between the United States and Israel during the Netanyahu-Trump era, has generated the most interest. Bernie Sanders, Pete Buttigieg, and Elizabeth Warren (via video) all agreed that should they be elected, they would make it clear that their support for Israel would come together with precise expectations regarding Israeli behavior. Sanders was the most explicit, criticizing Netanyahu for his “racist” policies and demanding an improvement in the situation in Gaza. Mayor Pete, the first to raise the possibility of holding back military aid to Israel should it be used for other than purely defensive purposes (such as deepening the occupation or annexing segments of the West Bank), used his J Street platform to press home the point that friendship comes together with a measure of guidance as well. Warren, in turn, denounced the occupation and implied that its continuation would require a review of certain aspects of American aid (but not of security assistance). Similar queries reverberate throughout the American liberal and progressive landscape today. Common to all those in this group — regardless of the very real nuances they display — is a willingness to call out Israel as an integral part of maintaining a strong value-based relationship with the country down the line. It is also a way of signaling that the era of blank checks for Israel — unlike for other countries — is fast coming to an end.

A fifth approach, one not represented directly at the J Street gathering, consists of those who openly oppose the continuation of support for Israel and call for a thorough revision of the connection. They, along with other advocates of an assertive position against ongoing Israeli control of the Palestinians in the territories beyond the Green Line, are stepping up their campaign to apply direct pressure on Israel — also through boycott and sanctions. Some do so because they cannot countenance Israeli policies — some because they question its right to exist.

The American political discourse on Israel is becoming increasingly nuanced and critical. The automatic backing Israel received over the years can no longer be sustained when current US policy towards Israel upholds policies that are at odds with the proclaimed values of equality, justice, tolerance, and liberty so central to the core liberal values of so many Americans (and the vast majority of American Jews). From this perspective, the discussion over approaches toward Israel is very much an extension of the increasingly heated debate over democracy at home.

The American conversation about these issues is catching up with the discourse within Israel itself. Such debates — often heated and vitriolic in the extreme — are taking place everywhere in the country and contributed directly to Netanyahu’s failure in the two rounds of elections held this year. It is hardly surprising that similar concerns about how to deal with the ongoing occupation and expedited processes of democratic erosion are now spilling over to the United States as well. They will continue to be on the table and to affect relations between the two countries until Israel changes course.