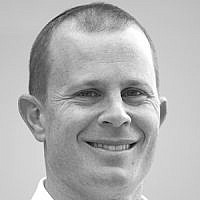 The Blogs
Gad Krebs
Apply for a Blog
Advertisement
Please note that the posts on The Blogs are contributed by third parties. The opinions, facts and any media content in them are presented solely by the authors, and neither The Times of Israel nor its partners assume any responsibility for them. Please contact us in case of abuse. In case of abuse,
Report this post.

“Better to remain silent and be thought a fool than to speak out and remove all doubt.” − Abraham Lincoln

There is a significant difference between showing support and having an opinion.

Showing support is the decision to throw one’s weight behind a particular side or party, because you align yourself with their policies in certain areas. It may be for motives that are purely self-orientated rather than altruistic. I support my sports team even though it may be significantly inferior to the opposition. I support a political party because it asserts my personal beliefs and views on specific issues.

Opinions are, by definition, subjective views on issues, backed by evidence substantiating those views. The more informed an opinion, the more credible it is and the more it should be considered by others. On the other hand, can everyone have an opinion? If I am ill-informed regarding a particular matter, do I have the right to an opinion?

Is there a point where people, due to their ignorance, lose the right to have an opinion? By all means educate yourself and join the debate, but how can we seriously consider positions and opinions that lack any credibility? It’s democracy gone mad.

“All my life I have been raised among the wise, and I have found nothing better for oneself than silence.” − Pirkei Avot 1:17

You don’t have to have an opinion on everything; there is great value in silence. By all means throw your support behind a cause, but keep your uninformed opinions to yourself.

About the Author
Rabbi Krebs was born to a traditional family in Johannesburg, South Africa. In 1997 he and his entire family moved to Sydney where he studied a BCom -Finance and Information Systems- at the University of New South Wales. It was during this time that he decided to explore his Jewish roots and spent time at Yeshiva in the old city of Jerusalem. Upon completing his degree Rabbi Krebs made Aliya to Israel where he has served in the Israeli defence force. He initially studied in the famed Yeshivat Har Etzion under the tutelage of Rabbi Aaron Lichtenstein. His subsequently began studying for his semicha under Rabbi Shlomo Riskin and Rabbi Chaim Brovender at Yeshivat Hamivtar, Efrat. In 2007 Rabbi Krebs was appointed as the fulltime Rabbi of Kehillat Masada. He is a qualified Psychotherapist and Professional mediator.
Comments