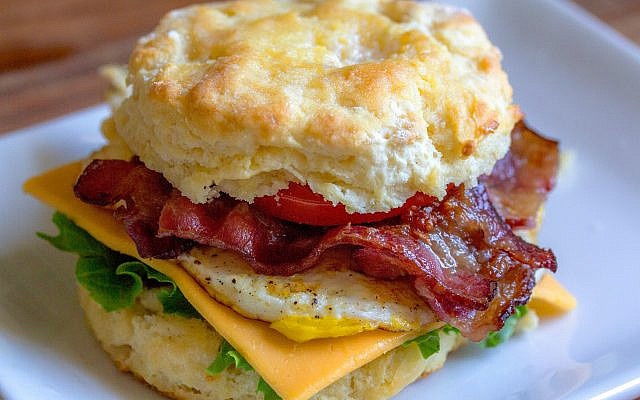 Warning: Might Contain Bacon (Photo by Angele J from Pexels)

It is sad to see Judaism being distorted out of all recognition by self-appointed “interpreters”.

The Judaism that I know has two vitally important tenets which I take the liberty of describing in my own words.

Firstly, unless there is a direct conflict with the Torah, all civil laws of the country must be obeyed. A new law forbids driving on Sundays? You now have two driving-free days in your week. A new law mandates eating shrimps on Fridays? You have a problem; it’s time to leave the galut and come home to Israel.

And secondly, if life is in danger, all bets are off. With just a few exceptions, any commandment can, indeed must, be ignored if life is at risk. Shipwrecked on a desert island with nothing to eat but pork sausages and ham sandwiches? You can and must eat them. (I am not sure if you are allowed to enjoy them!)

As far as I know, there is no commandment for or against wearing a mask. But there is most certainly a civil requirement to do so, to say nothing of the moral requirement to protect one’s fellow citizens.

While we are commanded to pray several times a day, there is no requirement to do this crammed together with thousands of others (and not a mask in sight).

Some 30% of coronavirus infections in Israel are coming from the ultra-Orthodox community, even though they are only around 10% of the general population. Ultra-Orthodox institutions have repeatedly ignored the government’s instructions. Police, trying to enforce the regulations, have been attacked by violent Haredi mobs, encouraged by their leaders.

We must ask ourselves where this is coming from. There are a few possible explanations. The rabbis, ignorant of medical science, do not understand just how dangerous the virus is. Some go as far as claiming that it is a plot intended to destroy their world.

On the darker side there is the possibility that leaders of the Haredi community do not want to lose their power and would rather see members of their community die than let civil leaders have any say in their closed worlds. For all our sakes, let us hope that this is not the case.

The virus seems to be smarter than us humans. It is quickly mutating to new and stronger versions that can beat our vaccines. Perhaps it is time for us to mutate and come up with ‘new humans’ that are able to put aside our petty differences and join together to fight the virus.