Yet, last month, Anat Hoffman, Executive Director of the Israel Religious Action Center and chairwoman of Women of the Wall, prayed at the Western Wall and was arrested and charged with the “offense” of wearing a prayer shawl and disturbing public order.

In August, I went down to the Kotel to see Women of the Wall and what I heard did not disturb my peace.  Instead, it was a lovely, rousing cacophony of voices, sounding much like Jeremiah must have imagined as he dreamed of Jerusalem reborn.

On the left, a men’s group was singing madly – much louder, incidentally, than the women.  Their location, hugging the divider between the men’s and women’s sections, and the sheer volume of their singing, led me to the impression that they were trying to drown the women out, sort of like a big sing-down at the camp mess hall (perhaps they were also planning to raid the girls bunks that evening).  But the effect, when combined with the soft voices of the women chanting Hallel, to my mind, only added a grander sense of harmony.  This was no disturbance of the peace.

Judge for yourself – I’ve uploaded the video here.

Then listen to the voice of the women by themselves.

Jeremiah could not have imagined it better.

It’s time for the Kotel to be reclaimed for all the Jewish people. 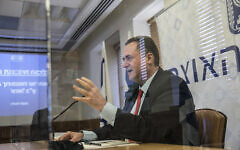