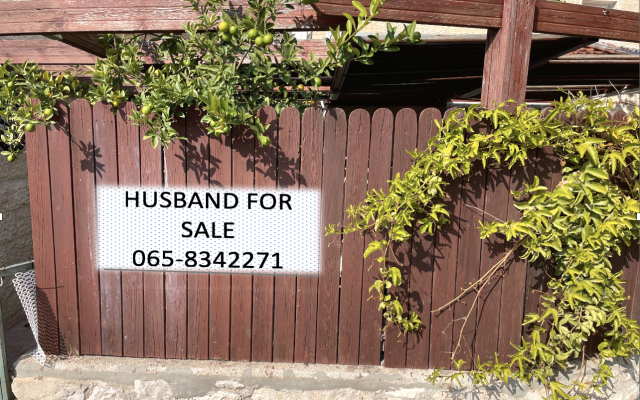 Wife Seeks to Sell her Husband ("photo" by Barry Lynn)

What are our goals when it comes to diversity? Should we strive to be individuals or should should society insist that we be defined by race or gender, etc? Should we be a he, she, or a they?

But first, my wife has been coming and going with a number of very large white boards. You see, she’s doing someone a favor, helping this person advertise some properties he (or she, or perhaps they) would like to rent or maybe sell. Hence, I took no notice of these comings and goings, other than to ask once: “what are you doing?” Being assured that she was simply advertising properties, I was a bit surprised (perhaps an understatement) to see the gaggle of people on the road above, pointing at our home.  All looking at the sign on our front garden fence (above).

What it all comes down to is: “bad weather.”  My wife is very direct and she doesn’t beat around the bush.  Of course, the weather has been absolutely beautiful, but that’s the problem. Having spent a good couple of weeks putting away the warm weather clothing and arranging the cold weather clothing, what is a wife to do when none of her clothes fit the weather?

The good news is that the weather will be a changing.  True, it’s going to get a bit cooler (and rainy) mid-week before getting a bit warmer (actually, quite a bit warmer),  but forecasts are all showing quite a change towards winter weather  as we head into the last week of the month and then into early January. If you ask me, that’s perfectly fine, but the sign has remained up.

As noted by Yaakov Cantor, of our “Israel Winter Weather” group,  we’ve been under the influence of a unusually strong “North Atlantic Oscillation” (or NAO), which has been near a rather comparatively very low value of -4.  However,  he went on to write that there is a forecast “weakening of the -NAO.”  This will lead to “subsequent changes in the orientation of the high-latitude ridging and [move} downstream troughing [over us], [which] has the potential to lead to an extended period of stormy, wet, cool weather from the middle of next week through at least the end of Chanukah.”   Even more, for those that are annoyed at their local weatherman,  Mr. Cantor’s look ahead into early next year (January 2023) shows a continuing amplifying pattern, meaning not just a cold rain, but possibly snow to start the new year.

Interestingly, he summarily pointed out that “it has become common for us to have below normal rains in Oct-Dec (overall, not month by month) since around [the year] 2000, except in [an] El Nino year.”  He attributes this to  “global climate change.”

For some people, “global climate change” is a smokescreen to hide behind, by those who wish to turn the world into a socialist, leftist, woke world.  For others, it’s just a few words that describe weather features beyond what once was considered normal.

There might be others who also take offense at the sign my wife posted.  Not because she wants to sell her husband, which many wives can sympathize with, but because the sign should have said: “for sale: Significant Other.”  Of course, one would then need to infer who is being sold, or guess, and I would like to add that this is a general problem now permeating society.

For instance, recently, I was requested to review a paper.  The journal has decided to better “understand” the makeup of their reviewers.  Hence, to gain access to this paper, I had to answer the question “what is your preferred gender?” When I mentioned that such a survey should not be part of the review process, the editor wrote: “By collecting gender identity, and race & ethnicity (GRE) data, we can take an evidence-based approach and hold ourselves accountable: we can measure the current situation, obtain data to drive a coordinated set of actions and initiatives, and monitor the effect of our actions.”  I had a simple question for the editor: how would you know who wrote the sign?  Was it a woman identifying as a male, or myself, identifying as a female? Who wanted to sell who? Or, instead of  “holding themselves accountable, why not simply sample potential reviewers from different countries, while taking into account first names?  Save the survey, stop typecasting people, and take real action to potentially increase diversity of the reviewers.  One might also examine whether some reviewers are better than others, and what that tells us about our need to improve not just diversity, but excellence.

But, more importantly, the idea to label everyone by gender and race actually leads to a lower acceptance of diversity.  In other words, it exacerbates divisions in society. Instead of just accepting that some men like to cook and tend flowers, and some women hate cooking and prefer to chop wood, we’re forced to say that he’s a she and she’s a he.  You don’t have to be a “they,” you can just be you.  We could just accept the diversity that stems from just being male or female, even if that male or female doesn’t fit the stereotype of each.

When it comes to sexual attraction, I also wonder why must peoples sexual predilections be labeled, instead of just accepted as part of the bell curve of predilections among the sexes? In other words, we could let individuals choose who they are, individuals who may actually change their choices over time.  Might instead of them being “gay,” they could simply be happy with their choices.

Another type of gender related issue came up a while ago after the Washington Post published an article on gender roles in the home, and how choice of gender roles affects the attraction between significant others (i.e, male and females).  More recently, it returned in a publication that suggests that women are actually more sensitive to gender roles than men. In other words, women find men to be more attractive if their men are less nurturing and more “manly,” while men, to a lesser extent, prefer their women to be “feminine”  Of course, there has been a lot of push back against this from those who pushed back against it.

I really wondered about this, but being a scientist I was in a unique position to find out the answer, to settle part of this issue once and for all.  I set up experiments consisting of four permutations:  i) working in the kitchen while dressed normally, ii) working in the kitchen while wearing my outdoor clothes, iii) working outside while dressed normally, and iv) working outside while dressed in my outdoor clothes.  The results were stunning:  for the first experiment, it took 10 minutes before my wife asked me why am I in the kitchen, for the second, 15 minutes.  This is a significant difference! For the third  experiment, she gave me that special look: “I am glad you’re my husband,” but for the fourth experiment, she tore down the sign.

So, I can definitely conclude that women prefer their men to be more manly.  However, when I tried this for a whole week, I was told to be more nurturing — or the sign would go back up on the fence.

About the Author
Dr. Barry Lynn has a PhD in Environmental and Atmospheric Sciences. He has an undergraduate degree in Biology. He is a researcher/lecturer at the Hebrew University of Jerusalem, and is the CTO of Weather It Is, LTD, a weather forecasting and consulting company.
Related Topics
Related Posts
Barry Lynn