Despite the grumbling of my stomach as the Tisha B’Av fast (commemorating Jerusalem’s destruction) continues, the words of  the Eichah lamentations read last night, ring strong in my ears:

Central to the city’s fall in both 586 B.C.E. and 70 C.E., is the destruction of both the Temple and the mountain it stood on. Site of the Holy of  Holies, the Temple Mount is the traditional epicenter of the Jewish people.

Yet for me, the foot of the mountain, namely the Western Wall, holds an equal importance to Judaism – certainly nationally and culturally.

The Temple Mount was chosen by God as a sanctuary and a place to house God’s Name. Over the years, political realities and religious considerations dictated that Jewish prayer shift to the foot of the Mount. Since then, the people of Israel – wherever they might be –  have longed to pray at the Western Wall.

For 2,000 years, since the destruction of the Second Temple, Jews across the globe have yearned for their homecoming to Zion. What united them was the hope that one day they would return to Israel and be able to pray again at the Western Wall, the relic of the Temple. This connection is what morphed the Western Wall – and not the Temple Mount – into the symbol of the Jewish people.

According to the letter of the law, the Western Wall has no innate sanctity. It acted merely as an external wall to the Temple. However, our history shaped it into a sacred and important site. The holiness given to it by humans is what made the place an integral part of our history, and in so, makes it a critical part of our present and future.

The Western Wall has become the location towards which all Jews pray. It therefore unites (or at least idealistically does so) all sects of Jewish people. It is a site which is a symbol for all denominations from secular Jews to the ultra-Orthodox.

In his book Altneuland (The Old New Land), Theodor Herzl writes that “the Temple was rebuilt because it was time for it.” We hope for the rebuilding of the Third Temple, but the time is not yet ripe. As a nation, we are far from united, but we have not lost hope.

The Western Wall is not just a place of prayer and supplications. It is our ethos, our story.

I choose to fight for the Western Wall because I see this site as a symbol. It is a symbol of a democratic and free state, and of religious freedom for men and women from all streams of Judaism. The Western Wall of today is the Jewish people’s center of gravity of. Its historical role is to unite the spectrum of Jewish peoplehood for a better future for all of us.

The Western Wall is where I honor God’s name. 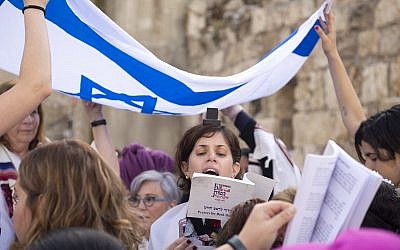 About the Author
Yochi Rappeport is the executive director of Women of the Wall. She was born and raised in the Orthodox environment of the Safed Old City. Upon turning 18, Yochi joined the IDF and served as a commander in a course for Judaism and Zionism for soldiers who aren't Jewish and new immigrants. Following her service, she studied Political Science and Middle Eastern studies at Bar Ilan University, and then served as an executive assistant at an Israeli news agency. Realizing she wanted to be a part of something more meaningful, she happily started working for Women of the Wall in 2016, as director of Education and Community Outreach. Today, Yochi lives in Jerusalem with her husband and daughter, where they live an open-minded and feminist Orthodox lifestyle.
Comments