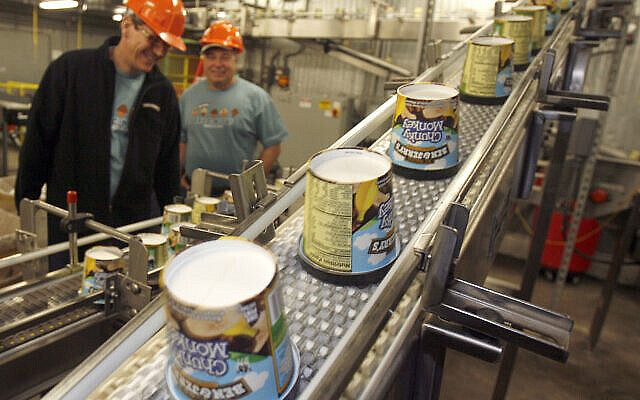 In this photo taken March 23, 2010, ice cream moves along the production line at Ben & Jerry's Homemade Ice Cream in Waterbury, Vt. Ben & Jerry's is cutting about two dozen jobs at its Waterbury plant as part of a restructuring of its Vermont ice cream making operations.(AP Photo/Toby Talbot)

In his famous thought experiment about quantum mechanics, Erwin Schrödinger examined whether a cat can be considered to be alive and dead at the same time. Israel’s West Bank policy offers a modern variant that has in recent days hit the news.

When it suits Israel, the West Bank is part of the country. This is the situation when Israel wants security control from the river to the sea. Or when it wants Jews to be able to settle anywhere in the historic Land of Israel. Or when it builds towns there essentially for those Jews only. Or when it allows Israelis living in the same towns to vote in Knesset elections (though Israelis living outside the country cannot).

But when the opposite suits Israel, then the West Bank is definitely not part of the country. The oppression of the Palestinians, the different legal systems for genuinely neighboring Jews and Arabs (don’t call it apartheid!), the military administration — none of it is in Israel. This is the approach when Israel wants to compete in European sports tournaments and the Eurovision Song Festival. Or when its citizens want to enjoy visa-free travel. Or when it wants free trade for its high tech and to be best buddies with the United States (even when Trump is not president). This is certainly the attitude when it wants to attract tourists to a gay-friendly Amsterdam-on-the-Mediterranean. The unpleasantness in the West Bank is, in these contexts, not in Israel.

How does Israel keep this ball in the air? That’s easy! It does not officially annex the West Bank.

The world has a lot of other problems to deal with, and despite what some view as an obsession with Israel there are not enough hours in most people’s days to disentangle all of this. This enables defenders of the status quo to dismiss criticism as ignorant (or worse, as antisemitic).

Last week, Spike Lee, in his role as the  Cannes jury president, issued some poorly worded criticism of Israel suggesting artistic freedom here is not complete, and that in general the country is not free. An outcry arose: He is confusing the West Bank with Israel! The West Bank may indeed not be free (no one claimed it is), but how could he attach that to the only democracy in the Middle East? Lee probably is indeed a little muddled, but he is a gifted filmmaker whose instincts on the essence of things are rather sharp. He seems disinterested in explanations about how the West Bank is not part of Israel.

This week we discovered a new scandal, with Ben & Jerry’s: the liberal American ice-cream empire has decided to boycott the West Bank settlements. Another furor arose, but in the opposite direction: How dare they discriminate between different areas in Israel? Every Israeli and every region in the country must be treated equally! Now the West Bank is part of Israel.

The two cases perfectly illustrate the non-annexation magic, just like in quantum physics with multiple states depending on the decisions of tiny particles, or on a trick of the light. Formally the West Bank is not part of Israel. But practically it is part of Israel (at least the bits of it occupied by Jews, but again, this is not apartheid!).  You can choose which applies depending on the situation.

Occasionally right-wingers demand annexation, which would undermine the clever little ruse. Most of them are not terribly clever: they believed their own bluff, or understand little to begin with. Some annexationists calculate that if the annexation were limited to the parts that Israel really wants, the world and the Palestinians will accept the Swiss cheese-like map this would create as real and feasible (Prime Minister Naftali Bennett, if he believes what he says, is in this group); the disconnected parts that are not annexed would not be considered Israel, and the Palestinians will accept the difficulties of entering “Israel” to visit crops and haberdashers.

So far annexation has been avoided, and things have worked out for 54 years. Israel is in the Euroleague and Eurovision, Israelis travel without visas, trade is great and Joe Biden is friendly too. Ben & Jerry’s will probably not change that (unless their act mushrooms into a broader boycott of any company that deals with settlements; that would be awkward due to the Israeli law forbidding cooperation with such things).

My prediction is that things will only really start to fall apart when today’s students, who detest injustice, become the leaders of the West, in about 25 years. Then the pressure will be turned up around the time demographics kick in: when separation is no longer possible because there are too many settlers, Israel will officially become a bi-national state and have to grant voting rights to the millions of Palestinians it controls. It will unfold slowly, but fatally: no more “Hatikva” or “Nation State Law,” and no more “Start Up Nation” either, I fear.

The fate of the Jews in this scenario will probably be similar to that of the Christians in Lebanon. They too were too shortsighted to agree to a smaller country with a clear majority for their people, and preferred little tricks maintaining their control to logic, until the inevitable collapse.

Meanwhile, though, the occupation merely harms what is left of Israel’s good name. For most Israelis, this is unpleasant but not unacceptable; no country likes to be told what to do. Facing quibbles, they wheel out the correct argument that there are worse things in the world. No question: there is a double standard. Worse things indeed occur, from Syria to Sudan to China. But not so much in the club of countries Israel sees itself belonging to. From a certain angle, in the twilight, the whole setup in the West Bank actually seems pretty unprecedented in modern history, and not in a good way. It is one of the few policies on record that can be reasonably be criticized both as wrong and as against the perpetrator’s interests.

Why can’t Israel address this looming disaster (and in the meantime also enjoy industrial-but-delicious ice cream)?

Partly it is because there is really a security problem in returning to borders that leave Israel about 10 miles wide at its narrowest point. Many of Israel’s critics truly are ignorant about details which are important.

But mostly it’s because Israel and the Palestinians have created a situation so complex that most people fail to understand it fully. That includes fabled filmmakers and it includes timorous global brands.

It also includes a significant portion of Israeli voters. Four times they went to the polls in recent years, and things got pretty heated, and in the end the prime minister’s office actually changed hands.  But not one of those campaigns was focused on the problem that could easily make a Beirut of their Amsterdam.

Disaster is most easily ignored when it unfolds slowly, with the complexity of quantum mechanics.