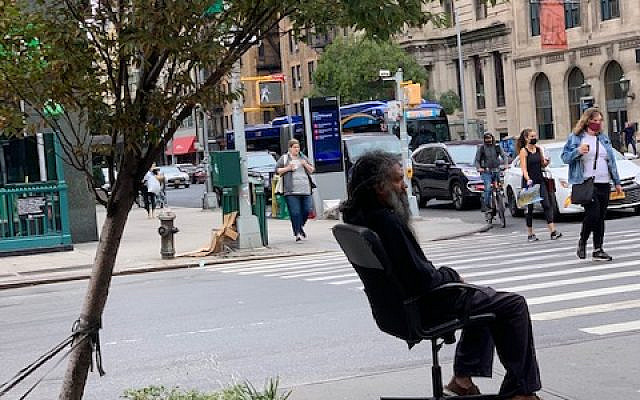 Photo taken by Penny Cagan, with permission to publish. September 2020.

“My residence is at the trunk of the tree.”

Sometimes it is remarkable how life mirrors each day’s Daf Yomi reading. I know that it is neither a coincidence nor providential, but rather the result of how I look at the world differently than I would have before I started this journey through the vast Talmud. Each day I find some relevancy in the text because I am making new and meaningful connections.

Today I noticed a man sitting in the middle of a crosswalk at 7th Avenue and 23rd Street under a tree that was tilting toward him as if it was trying to provide a canopy of protection. He was sitting on an office chair and had a cup of coffee by his side. This man seemed to be engrossed in watching people walk by him and no one seemed to question why he was there and where the office chair came from. It was if he was in his office with invisible walls around him.

We learned in today’s Daf Yomi that if one says “my residence is at the trunk of the tree,” he can establish his residence there and may walk two thousand cubits from the trunk of the tree to his house, if he is lucky to have a house. The man I observed sitting in the middle of 7th Avenue today, did not look like he had a safe home to return to, but I may have allowed scruffy beard to influence my impression of him. Maybe he does indeed live somewhere and decided for whatever reason to pull up an office chair in the middle of 7th Avenue. It is New York City after all, where anything is possible.

It is asked in today’s text what is meant when Rabbi Meir said, “a pauper can establish an eiruv with his feet.” We are told that one can simply say, “my residence is my current location” and be able to move around in either direction by two thousand cubits. A pauper does not have to actually mark a place with bread or food and can simply say “my residence is my present location.” This is an allowance that Rabbi Meir permits for the wandering soul who is traveling on Shabbat and requires a safe place when it grows dark.

We are told a story of the households of the Memel and Guryon families in the village of Aroma, who provided dried figs and raisons to paupers during the years of famine. Needy people would travel from neighboring villages on Shabbat for the offering from the generous families. They would establish their eruv at the edge of the village (with their feet) at nightfall and then return home. This allowed them to return the next morning to receive the figs and raisins. Today’s text also tells us that if someone has two houses in different cities and is traveling between them on Shabbat and does not intend to return to his first house, he has the “legal status of a pauper.”

When I was in graduate school at New York University, I was living on a meager student stipend and was scraping by in this expensive city with a part time job in a library. I was living on cheap food – mostly noodles in a cup, peanut butter and jelly and pancake mix – and I could not imagine a life where I would not feel so impoverished. The riches of the great City of New York lay before me but were mostly prohibited because I could not afford much outside of my rent and academic fees. But I was young and somehow managed. I remember a fellow graduate student telling me that the poverty that we felt as struggling students was not the same as those who have lived years and perhaps generations in poverty and had a much harder way out than our present circumstances.

I always remembered those words: their poverty is not the same as our poverty. I can easily fall into sadness over the state of the world and the destruction that the pandemic has brought. I have been in mourning since last March for the life I lost. But I have a nice apartment and a job and access to the internet which has been my lifeline over the past 6 months. We live at a time when there is a digital divide between those who can live their lives online through services like Zoom and those who do not have access to the internet and electronic devices. I fear especially for the children who are learning from home without the proper technology. They are losing important years in their education, which is a way out from poverty.

We are one of the richest, most technologically advanced nations on earth and yet, we cannot as a society make a commitment to erect electronic “eruvs” in our cities, which would provide free and unfettered wireless services to anyone in need. It would be one of the greatest mitzvahs during this challenging time if the technology companies that are benefiting from the shift to online learning and living would allow the most vulnerable among us to become connected and claim their place in the digital cloud.

And I shall always remember my fellow student’s words: Their poverty is not the same as our poverty.