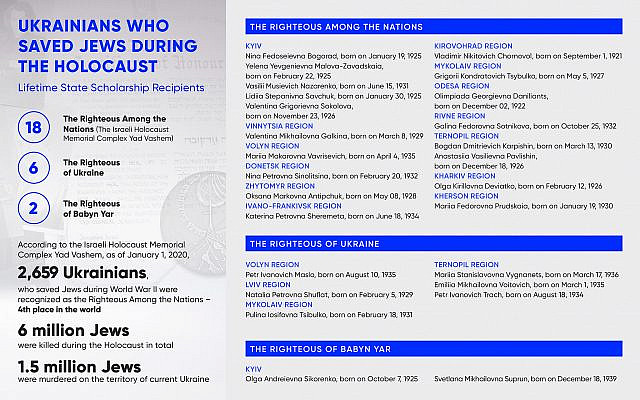 According to the official data, there are currently 26 Ukrainians alive in Ukraine, who saved Jews during the Holocaust, despite the threat to their own lives. In accordance with the decree of President Volodymyr Zelensky, all of them have become recipients of lifelong state scholarships.

The Israeli Holocaust Memorial Complex Yad Vashem, created in 1953 on the initiative of born in Poltava region Ben-Zion Dinur, awards the honorary title of the “Righteous Among the Nations” to such heroes. Similar to the Israeli one, such titles as “The Righteous of Ukraine” and “The Righteous of Babyn Yar” are also awarded in Ukraine. Despite the difference in versions, they all coincide in one thing – people who neglected their own safety for the sake of those in need of help deserve to be remembered for their heroism.

The publishing house “Our Format” will soon publish a complete list of the Righteous Ukrainians, as well as individual stories of the salvation of Jews with photographs of the Righteous and the saved ones. The book “The Righteous Among the Nations in Ukraine” was prepared to the 80th anniversary of the Babyn Yar tragedy by the Jewish Confederation of Ukraine in partnership with the Babyn Yar Holocaust Memorial Center and the Euro-Asian Jewish Congress.

Join me, Boris Lozhkin, on Twitter @lozhkin_boris for news and commentary on Judaism in Ukraine and around the world. Follow me on Facebook for updates on the work of the Jewish Confederation of Ukraine. Find out more about my work at borislozhkin.org