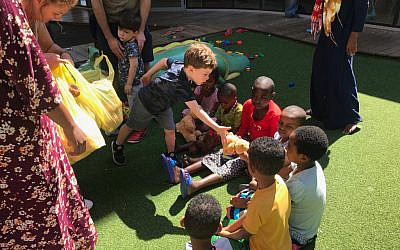 Picture shared with Rabbi Claire Ginsburg Goldstein to post of where and how far her toys have reached. These Jewish American children are sharing their toys with Israeli children in need of a teddy bear hug. 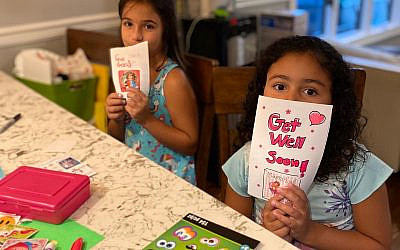 Children of Israeli descent finding ways to reach across the miles to send a smile.

Where do these Jewish children learn their Jewish values? From their Jewish homes? Of course. But they also have to thank their local Chabads such as the Chabad in Closter for example. Chabad has become the beacon of light in our dark, swirling, riptide churning waters. Chabad offers classes to all ages, for those who want to keep their “pintele Yid”, their Jewish “neshamah” lit and flaming, here, aflame and  aflame in Israel.

Having just returned from break fast, after a long Yom Kippur that seemed to fly by this year for some reason, I began to sort out my reactions to what had transpired.

I first focused on the sounds that had surrounded me. I heard Russian being spoken to my right. I pictured the two of them pushing their pushkeh carts down a street in Odessa.  I heard another Mom flipping from Russian, to Hebrew, to English depending on which Jewish topic she was discussing at that moment.  She was stressed at that moment because her son, misplaced his kippah.  On my left was a Sephardic Israeli, married to a white Syrian (there are some!). I heard her melodies, rising towards the Heavens, blending in with the Cantor’s Chabad intonations. Next to move in to sit next to me, were young teen Israelis flipping from Israeli teen behaviors to the newly acquired American teen ways. I took note that the flip from one culture to the other is hardly noticeable any longer.  Our sister cultures are quickly merging as one and the same. Kibbutz galuout/ an ingathering of peoples, our own.  I heard different emotions being expressed in personal and communal prayers, other forms of sound. There were cries of pain, hope, joy, fear, anxiety, and thankfully confidence and inviting challenge to cross their thresholds. For a moment, when I closed my eyes, I forgot who was praying what. We were all Jews brought together because of Yom Kippur and praying for a better year ahead. Praying that Gd would see fit to begin to lift the punishing Covid and the impact that Covid has had over all of us,  everyone vulnerable. Fighting an invisible enemy with our fervent prayers, hoping Gd will bring Covid to its knees.

I turned to focus on the details of our Yom Kippur tent. Tables with freshly laundered white tablecloths, in order to set our Machzorim down when our hands ached from holding them. Lights to light up the enveloping darkness as nightfall began to settle in. Green plants and bushes used as part of our mihitzah, bringing the outdoors further into our praying space. Making the statement that Nature and Gd are one and intertwined. Our seats, with white padded seats. I felt like I was attending a tent wedding.

And then I asked myself, “Aren’t we here to reclaim and restate our vows with Gd? Aren’t we indeed participating in another wedding, a yearly ritual, reaffirming our vows with Gd and our relationship with Him? Begging forgiveness for our shortcomings and sins, missing that mark and acting as average human beings, succumbing to sin, year in and year out. Hoping to improve our behavior and make even better choices, one more time.

One more time, I prayed that my own children would find their individual paths towards building their personal relationships with Gd and Judaism. For some, a reaffirmation, for others, a journey forward, towards Heaven bent. Hoping that planting the seeds for Jewish growth, year after year, and time repeated, would be a good enough foundation. Finding that reassurance from Chabad that at least I put the right foot forward. Each day, each week, being reminded from my children that they were indeed growing towards Gd’s light. Chabad eased my angst and concerns.

My thoughts, concerns, my angst were broken by the first blasts of the shofar. Yom Kippur was  wrapping up. I broke my reverie and jumped to watch the Rabbi blast that shofar, a tekiah that seemed to never end. I wished that once again my father would have been there to hug me tight as he used to when I was a young student at school. He is no longer here but I imagined his hug, his aura, his bright light shining down upon me from Heaven. I looked around. I thought that I felt his hug. I thought that I saw the bright aura, that white light. Yom Kippur was ended. I savored the sounds of the shofar in my ears, enjoying the final sounds of Yom Kippur.

And what about the questions that I am afraid to ask. And what about our Eternal people and their connections to the land? How do I begin to understand Israelis living outside of Israel but still being connected to our land? Aren’t they allowed to leave Israel for livelihood? Of course!  Wasn’t the answer complicated and multi faceted? For sure.  I knew deep in my heart that there was no simple answer to answer any of my questions.   What about my own connection to Israel where I dream of continuing Hesed in the House when Covid lifts once and for all? Is there a way to live there and here? In search of holiness here, until I can once again find it there.

The land is called holy because it belongs to God. The Bible tells us that the earth is the Lord’s to do with as He wills (Psalm 24:1; Exodus 19:5). In His covenant with Abraham, God designated who would control this land: He gave it to Abraham and his descendants, the people of Israel.

“The love of this land was due to an imperative, not an instinct, not to a sentiment. There is a covenant, an engagement of the people to the land. We live by covenants. We could not betray our pledge or discard the promise. When Israel was driven into exile, the pledge became a prayer; the prayer a dream; the dream a passion, a duty, a dedication . . . It is a commitment we must not betray . . . To abandon the land would make a mockery of all our longings, prayers, and commitments. To abandon the land would be to repudiate the Bible.”

I walk the streets of the Promised Land where Abram walked. I drive through the roads and plains where Isaac tended his flocks. I hike to the hilltops from where Jacob peered expectantly in all directions . . . I see these things and remember clearly the biblical truth. God gave the Promised Land, all of it, to our Patriarchs: Abraham, Isaac, and Jacob.

As I closed my Machzor for the last time this new year, 5781, I wondered about our ancestors and how they dealt with my questions.  I then closed my mind to my questions and concerns nagging and tugging at the fringes of my mind. When I could find a safe space to ask my questions and raise my concerns, I hoped that the timing would be right.

The timing was right for contemplating how would 5781 might be shaped and play itself out this year. For now, I was thankful that Chabad had shined the light into the night sky; thanks for leaving the light on.

My inner light was reignited and ready to burn.