When I came to Israel in 2012, it was the boldest move I had ever made in my life. Who makes aliyah at age 47? It was crazy. I swore then and hold now that every single good bit about me that had developed over time, I would bring to the table in Israel. This country made it possible for me to be here — so I have to give back. I get to give back. I get to make a difference.

I have grown much stronger while living here, I have found out what I am capable of. Dust storms, sirens, bureaucracy nonpareil and the heat. The withering heat. Not to mention having to learn Hebrew and find my way around with one hand tied behind my back. These are all relatively common experiences for Olim. It’s a tough transition.

Israelis have taught me so much about life and myself. Israelis are what resilience looks like. And joy. And determination. If you can withstand the brashness, the tachliss, Israelis are among the best people on planet earth. I will go to the mat for that.

The start-up ecosystem here, in particular, has inspired me more than I can possibly say.  The inexhaustible innovation and inventiveness, the creativity in this place, which is definitely an inheritance from Israel’s earliest days and collective experience, make me feel as if anything can be done if you ask the right questions, look at challenges in new ways and be completely open to what might at first blush seem like crazy ideas. Never say never is the battle cry of innovation in Israel and it is this ethos that inspires me more than I have ever been inspired in my life.

It is my American upbringing that led me to have a strong sense of optimism and a belief in my own possibilities but now I am a hybrid, with a strong can-do, determined, creative approach that I learned from Israelis.

There are many things to complain about in Israel. And there is also much to be done to find solutions. I like to dwell on the latter. What can we do to make things better, more inclusive, more tolerant and more creative in this tiny place with huge challenges?

Of the problems, many of them very pressing, that Israel faces in the 21st century, you wouldn’t think that ageism is one of them. But it is.

It is not news, if you live in Israel, that ageism is a problem here. Significantly more so than in the US. It is significantly more overt and, seemingly, somewhat acceptable, because not enough people are talking about it. By people I mean young people. And why? Because like death and taxes, ageing happens. If you are lucky.

Of all the places in the entire world, Israel should be the last to ignore ageism in our society. For we shall one day be members of that club.

Notwithstanding the fact that the distance culturally and socially, between “young people” and “old people” today is a gap that has been closed significantly in the past couple of generations, both in collective experience and in the way we view ageing, stratification and separation of one from another, by dint of age, race, gender, sexuality or anything else limits not just empathy, but the potential of nurturing the possibilities of vivid relationships, collaborations and even solutions between us.

As a consultant, writer and media literacy advocate, I mostly work at home. Recently, a friend told me about a public work space provided by the municipality of Ramat Gan. Wonderful, I thought, and went to have a look. What a great space, what great people were there working. What a great solution. When I asked how one reserves a private room in order to  be a guest via Skype, of an LA web-news program, the face of the young lady speaking with me crumpled in sympathy. Oh — she said – you have to be under 40 to reserve those rooms, I’m so sorry!

The pursuant conversation was awkward, to say the least, with the young lady struggling to explain that this particular workspace was for “youth” — her apologies were fast and furious — and so because I was older didn’t mean I couldn’t work there — no no! — but I just can’t, you know, reserve a space. When I asked how the young lady could tell I was over 40 (go with me here) she dissolved into a puddle of embarrassed digging as she tried to explain exactly what being over 40 looks like and why this policy exists. Humiliated, I left. Okay. I get it.

I filed this experience under Unfortunate Things. But only a few days ago, I saw a great experience that interested me — a panel to discuss how Israel is treated in the media. As a media literacy advocate, I was really excited to go, soak up the discussion, and maybe even meet other people interested in media literacy. When I looked at the online invitation, however, it said, in no uncertain terms, that one has to be “20s and 30s only please.” Oh, here we go again, I thought. What is this?! I went to the main website of the hosting organization and noticed that they state they are for “youth professionals, olim, foreign press and embassy staff.”  Well. I am an “olim,” am I not?

I sent an email to the organization asking for an explanation of this exclusive caveat on the invitation to the event and got a two sentence email back to the tune of — sorry, lady. I wrote back — this is not a good enough explanation! I was frustrated and angry, I admit it. Do I not have value to add? Am I not deserving of inclusion at a panel discussion about — anything? I am a community member! This was now the second time in as many months that I have been informed that, no, I am not good enough because of my chronological age. Sorry, lady.

Later on, the phone rang, and a member of the organization said he wanted to be a mensch and explain to me over the phone, the age limit policy. What a nice guy to take the time to do that, I thought!

He explained very patiently that the reason for this age limitation is two-fold: when tickets are made to the general public, they sell out fast and young people don’t get a chance to go. Which prompted me to ask what the qualitative or speed difference is between a young ticket clicker and an older ticket clicker. (It’s not an issue of cost — the events hosted by this group cost 20 shekels to attend). The man laughed my point off but reiterated that this apparent clicking speed is a problem. O k a y. And what else? Well, he said with a knowing laugh, when we do not limit the age, then we get older men who hit on the young women who attend, and it makes them uncomfortable and ruins their experience.

The pause that fell between us could have left me enough time to polish up my walker and return to the phone. Because — older men hit on younger women? This is your reason? Yes, he repeated emphatically.

I’m not even a man but that offends me on their behalf. Do young women not stand a stronger chance of getting hit on anywhere and everywhere else as well, I asked. Like at a bar? What are you saying here? This is not adding up. I get hit on by men all the time — younger, older — I added. Well, kol hakovod, he said.

My eyes were crossed, I think. What. Was. This. Person. Saying to me? It made absolutely no sense. But this is a private, volunteer organization and it is their prerogative to exclude who they want. Isn’t it?

Visions of other “isms” dance through my head. So — if I just showed up, would I get turned away for not looking the way “20s and 30s” look? Would my ID be checked? Am I an undesirable? What would that interaction look like?

The nice man who called and spoke to me patiently then pointed out that my email was “judgmental and nasty,” but never mind, he wanted to invite me to come as his personal guest, and gave me a discount code. I thanked him graciously for his time and his effort and said I would go. After all, he really tried to smooth things over. It only took me a few confused moments after hanging up to begin to doubt my decision to attend despite the lame and dubious excuses and the barbs he had directed at me because I had spoken up about this issue.

Where is the line between an organization pursuing its mission, which it states is to “bring top leaders and decision-makers to speak in English to Tel Aviv’s community of young professionals, Olim, foreign press, and embassy staff,” and an attitude of exclusivity and ageism.

This should concern you, young people in Israel. Because if you are lucky, you too will age. Ageing is not a cattle chute that narrows as you go. Try to imagine being turned away from a resource or interesting community discussion because of a physical fact about your body. It’s not only wrong, it’s ugly.

We have to do better as a society. Exclusion is not a solution. In Israel, we have to use every resource at our disposal, every new idea, everyone and anyone who wants to be a part of the community of thinkers, learners and doers. Whether you are 45, 50, 60, 78 or 89, you should be able to attend a community panel discussion of relevance and importance in Israeli society. Heck, you should be able to attend the metaphysics of basket weaving for that matter, without being turned away because you are the proud and lucky owner of grey hair or crow’s feet.

I am not naming this organisation out of professional courtesy, but also because it doesn’t really matter. Ageism in Israel is widespread. I am sure that this particular organization believes it is doing the best it can to make their events great. I also believe excluding people by age is an ethical mistake. But that’s all right, people make mistakes. We can learn from them. I guess that’s something you figure out with age.

About the Author
Julie Gray is a writer and editor who made the leap from Los Angeles to Israel nine years ago and has many (mostly) humorous adventures ever since. Julie is the author of The True Adventures of Gidon Lev: Rascal. Holocaust Survivor. Optimist.
Comments 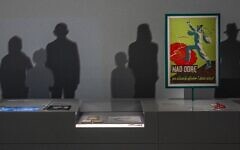