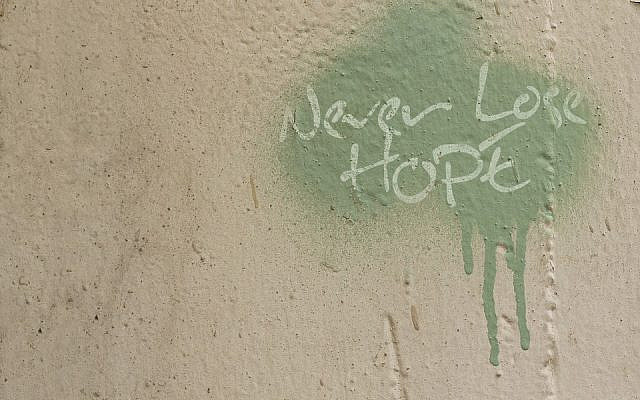 I am an optimist. But even for optimists there is no denying that our world has gone crazy and is only getting crazier.

This past year and a half has seen a decades’ worth of tragedies and disasters, political upheavals and power struggles, hate and anti-Semitism, confusion and pain. It feels like the world is spinning on a collision course with itself.

It’s hard to keep hopeful when you’ve been hoping for so long that the world will get better but the empirical evidence shows that it’s not. And while there are occasional improvements along the way, it seems like the forces that are intent on destroying or hating or dividing are only getting stronger and working faster. The forces of good have to work overtime, double time, triple time just to keep up.

It’s hard work caring about the world all the time and these forces of good need a break every now and then. Summertime is a perfect time for this: go to the beach, cool off in the ocean, and pretend that the biggest problem you’re facing is taking the sand off your feet before you leave.

But Jewish tradition doesn’t endorse long breaks from doing the work we came into this world to do. Maybe that’s one of the hidden reasons why the annual three-week period of mourning over the destruction of ancient Jerusalem and other tragedies that have plagued the Jewish people falls in the summer, so that we don’t become too comfortable in our comfort and blissful ignorance; so that we remember, as we’re brushing the sand off of our feet, that there are much bigger problems in the world than this.

And then the 9th of Av arrives, a historical magnet for a long list of calamities that Jews have experienced accompanied by a fast day to help us remember them.

Last night I went to synagogue with my teenage son and we sat on the low benches as is the custom on this day and listened to the sad-but-beautiful, beautiful-but-sad, chanting of the Book of Lamentations written by the prophet Jeremiah about 2600 years ago.

As I listened to the descriptions of the destruction of Jerusalem and the subsequent suffering and exile of the Jews back then, I began a dialogue with myself: Has there ever been a generation that has seen the level of goodness and kindness and peace that we are taught to strive for? Will there ever be a generation that sees this? Will I? Will my children?

My thoughts took me far away from the bench on which I sat, though I still heard the words of Lamentations being chanted which became the soundtrack for the history of the Jews and of humanity I was mentally scanning. So much pain and suffering, so much hate and destruction, so much evil carried out by the human race. And so many unanswered questions.

And then I came back from my daydream (or was it a nightmare?) and looked at the people sitting around me and noticed a man who I know to be a survivor of the worst evil ever carried out by humans against humans, the memories of his past etched deep into the lines on his face. Putting together the pieces of his life in my mind, he moved to Israel by himself after the war, fought in the early wars of Israel and then recreated his life here from scratch, just like the newborn country was doing.

And then my eyes shifted to his right, at a group of young boys sitting on the same low bench with him, all native Israelis for whom the idea of Jews without a country and an army of their own is a chapter in their people’s distant past and for whom exile and Diaspora are foreign concepts.

I then looked over at my son, also born in this country and native to this land, sitting next to me, his father, born in a foreign land, whose journey back to this place was not foreseen and definitely not a given. I watched his gaze as it focused downwards at the Book of Lamentations and wondered how he heard these words that spoke of a time when his people were ripped from this land (his country) and Jerusalem (his capital) was destroyed.

And then I returned my gaze to the text in front of me and immediately saw three words, from the middle verse of the middle chapter of the book, staring back at me:

I don’t remember ever consciously being aware of these three words in the Book of Lamentations, as if they were hidden from me all of these years until this year when I most needed to see them.

The world is indeed crazy and getting crazier.

Jewish history is indeed dotted with too many points of deep darkness.

And for all of this we mourn on the 9th of Av.

But remembering the pain of our past is not meant to paralyze us in the present. And the essential message of this day is not despair from the world’s craziness or from its darkness.

Hope is the tool we use to keep back the encroaching darkness with one hand, while creating light with the other.

And hope is a message from the future pleading with us not to give up, because there is a better day coming our way.

And then I peer again over at my son sitting next to his born-in-the-Diaspora father, and at those native-born Israeli boys sitting on the same low bench next to the Holocaust survivor, all of us together in the same synagogue on Tisha B’Av in the modern State of Israel.

About the Author
Akiva Gersh is the editor of the book "Becoming Israeli" (www.becomingisraeli.com), a compilation of blogs and essays that speak of the inspiring and the sometimes wacky and crazy experience of making aliyah. Akiva himself made aliyah in 2004 with his wife Tamar and they live in Pardes Hanna with their four kids. He teaches Jewish history at the Alexander Muss High School in Israel in Hod HaSharon. He is also a musician and in 2010 formed Holy Land Spirit, an uplifting and spiritual musical experience for Christian groups visiting Israel.
Related Topics
Related Posts
Comments
Advertisement