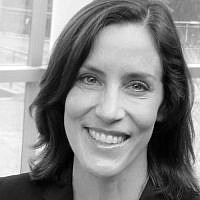 The Blogs
Keren R. McGinity
Apply for a Blog
Advertisement
Please note that the posts on The Blogs are contributed by third parties. The opinions, facts and any media content in them are presented solely by the authors, and neither The Times of Israel nor its partners assume any responsibility for them. Please contact us in case of abuse. In case of abuse,
Report this post. 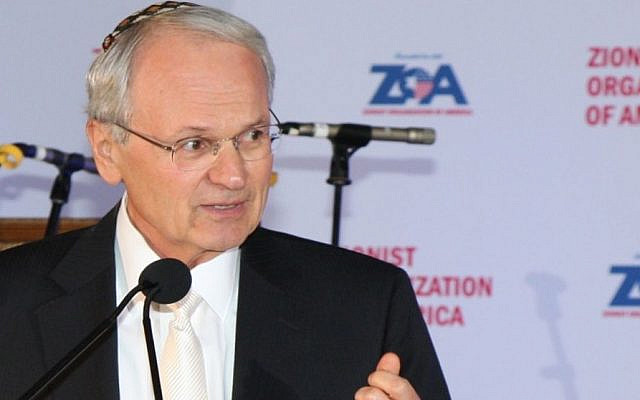 “Serious Jews don’t marry non Jewish women,” Morton Klein tweeted on August 12, 2020. I do not personally know Klein, but his attack on Joe Biden’s vice-presidential pick Kamala Harris’s husband Doug Emhoff made me seriously question his credentials to lead anything in the twenty-first century, let alone the Zionist Organization of America. 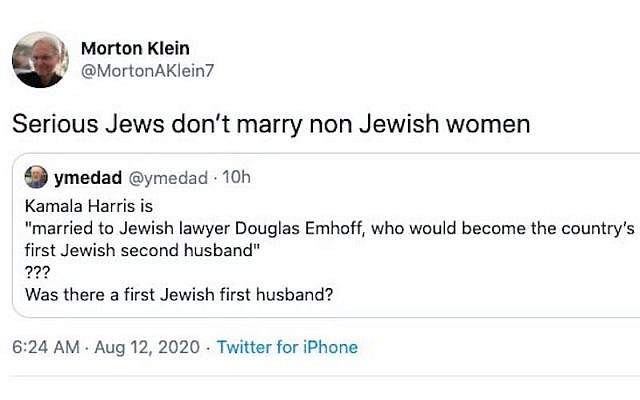 Because I do not know Emhoff either, I have not had the pleasure of celebrating Shabbat together, as did Yosef Abramowitz. What I do know is that Klein is categorically wrong. Serious Jews do marry people of other faiths and/or cultural backgrounds. And I do not just mean the famous ones, as The Forward ably reported. I mean the members of our families, our closest friends, and our esteemed colleagues. I invite Klein to learn about contemporary intermarried Jews by reading my books about Jewish intermarriage as well as those by Helen Kim and Noah Leavitt, Jennifer Thompson, Jim Keen, Susan Katz Miller, Rabbi Denise Handlarski, Rabbi Michal Wohl and Jon Sweeny.

The more significant point from my perspective is that after Jews intermarry, they are still Jewish. Furthermore, intermarried Jews have become over time increasingly proactive about identifying Jewishly, involved in the Jewish community, and in educating their children (if they have them) as Jews. Jews fall in love with people of other faith backgrounds, marry them, and want to remain connected to the Jewish community despite the fact that comments like Klein’s makes them feel like their marital choice is finishing Hitler’s work, as an intermarried Jewish woman wrote in the Jewish Telegraphic Agency. Klein’s statement also fails to recognize the progress that segments of the Jewish community are making to be more inclusive of interfaith couples and families. The Conservative movement, which has historically struggled with how to navigate the tension between the rise of the intermarriage rate and traditional Judaism, devoted its biennial plenary session to discussing officiation and is making strides to help its synagogues serve all families by focusing more on interfaith inclusion than ever before.

What is most concerning about Klein’s erroneous assumption about intermarried Jews is, first, that it sets up a false dichotomy: either a Jew cares about their heritage or marries someone who is not Jewish. That idea is as outdated as Alan Dershowitz’s 1997 claim in his book The Vanishing American Jew: “A decision by a young Jewish man or woman to marry a non-Jew is generally a reflection of a well-established reality that their Jewishness is not all that central to their identity.” According to Dershowitz? Klein? To the best of my knowledge, neither Klein nor Dershowitz have studied the identities of intermarried Jews. Moreover, the latest demographic research about American Jews finds significant population growth, nearing 7 million, which is far from vanishing. Perhaps one can forgive Klein, a child of Holocaust survivors born to Hasidic Jewish parents, for being a product of the lachrymose narrative that dominated Jewish intermarriage discourse for a half century. But it is high time to recognize that the narrative has changed, finally catching up with reality, and that Jewish leaders need to change their tunes.

Second, and more importantly, Klein’s condemnation of intermarried Jews is a slight that in-married and intermarried Jews alike should find insulting because it underestimates the dual powers of American pluralism and Jewish identity. American pluralism enabled Jared Kushner, an Orthodox Jew, entry into the upper echelons of American society and eventually the White House, just as it fostered the election of a Black and Asian Senator who married a Jewish man. Granted, Klein’s idea of a “serious Jew” is evidently someone identical to him. However, what all of the recent social scientific studies about Jews make clear is that most American Jews are anything but like him (white, Orthodox, male, Trump supporter). They are incredibly diverse in Jewish upbringing, in physical appearance, in religious observation, in cultural practice, and in who they choose to marry—whether they choose to marry at all—and they consistently vote for Democratic candidates.

Leaders who want to encourage Jewish engagement of interfaith couples and families, like Doug Emhoff and Kamala Harris whose stepchildren call her mamale, know that words matter. Klein and like minded people in power denigrating Jews who have partners of other faith backgrounds perpetuate the idea that the Jewish community is incapable of celebrating its differences. Someone like Morton Klein who condemns anti-Semitism should realize that their bigotry towards Jews who are different from themselves is just another form of Jew hatred. We can do better. We must do better. As the former First Lady Michelle Obama eloquently said, “When they go low, we go high.”

Perhaps Klein deleted his tweet against Doug Emhoff shortly after posting it because he suddenly realized he knew not about whom he tweeted. If Klein actually learned about intermarried Jews while trying to convince other people not to disparage Jews, he would know that he should treat them as one should treat all Americans: like they were created in God’s image, which is serious indeed.

About the Author
Dr. Keren R. McGinity is the author of "Still Jewish: A History of Women and Intermarriage in America and Marrying Out: Jewish Men, Intermarriage, and Fatherhood." She is the founding director of the Love & Tradition Institute, which is dedicated to opening hearts and broadening minds about intermarriage to build a fully inclusive Jewish community.
Related Topics
Related Posts
Comments