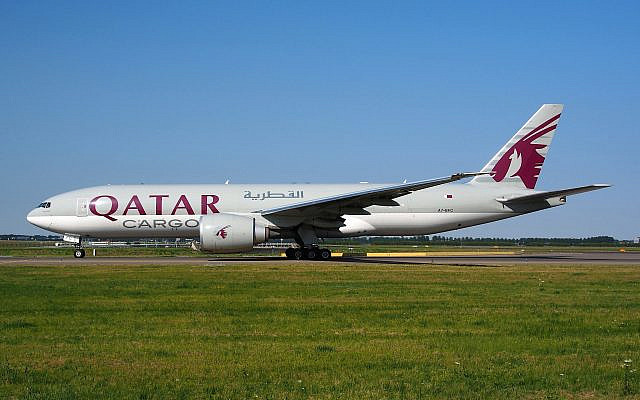 A Qatar Airways Boeing 777 (A public domain photo from goodfreephotos.com)

Some readers, when not busy reading my Blogs, may find themselves watching Sky News. As Sky News itself puts it “Sky News delivers breaking news, headlines and top stories from business, politics, entertainment and more in the UK and worldwide.”

This sounds good but, while providing a convenient way to catch up with the news from the UK, there is a darker side to this program.

Firstly, this so-called British news channel is, in fact, owned by Comcast Corporation, an American telecommunications company with its head office in Philadelphia. While you may not have heard of Comcast, it is the second-largest broadcasting and cable television company in the world. So your UK news comes to you filtered through US eyes.

But, more importantly, Sky News’ frequent weather reports are sponsored, that means paid for, by Qatar Airways. And Qatar Airways is fully owned by the Qatari government.

Qatar is reported to be a major funder of terrorism. The US Congress has voiced concerns about Qatar and its support, both openly and quietly, for Islamist terror groups that target the US and her allies.

In addition, Sky News often reports on events in Qatar in a much more favourable light than other news networks. Even its coverage of terror-related affairs in Qatar is considerably more positive than that of other networks. These reports help Qatar’s desire to be seen as a force for moderation in the Middle East.

In fact, Qatar maintains close ties to Hamas, officially designated a terrorist organisation by many countries. Hamas has caused suffering and destabilisation in Gaza for several decades. It continues to instigate attacks against the State of Israel, despite its missiles often falling short and killing their own people.

According to the German weekly news outlet Die Zeit, Qatar also finances Hezbollah, designated a terrorist movement by both the US and EU. Just to make things quite clear, Qatar has declared Jews, that’s Jews not just Israelis, to be its enemies.

So, next time you check how much rain is falling on Manchester, just remember who is paying for your weather report. They certainly won’t be reporting on the rain of missiles falling on Israel.

And another problem for peace-loving people is Qatar’s investment in British Airways. Never a lover of Zion, in 2013 BA was forced to apologise for displaying an in-flight map with the words “Palestinian Territories” covering most of Israel.

Since Qatar Airways started to invest in British Airways owner IAG in 2015, it has been steadily increasing its stake and now holds as much as 25% of the company.

In the last 20 years there have been some 26 aircraft hijackings. With British Airways passing into terrorist-supporting Qatari hands, perhaps it will be the safest way to fly when the skies reopen. After all, what terrorist would want to attack his own aircraft?