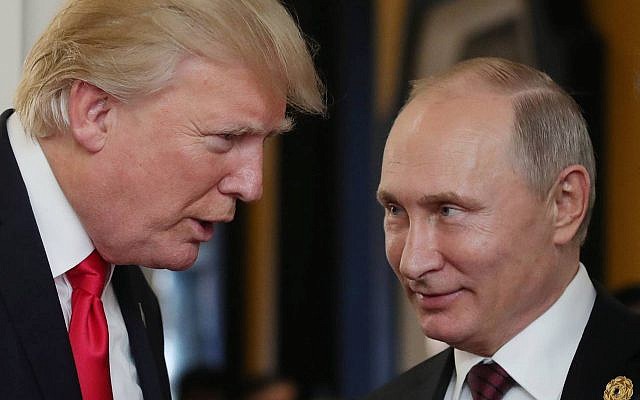 Smart and sweet people alike try to find out or think up what the hell was discussed and agreed upon in the two-hour meeting between the US and Russian presidents. There are a lot of guessing and nonstarter ideas, like Congress wanting to interrogate the US interpreter (possibly behind closed doors). I will explain why one doesn’t need transcripts, tapes, witnesses or clairvoyance to figure it out.

First of all what one needs is a clear picture of Trump’s mindset. A lot of nonsense is said about him, both by specialists (psychiatrists, psychologists) and lay people. Common sense though should be enough.

He would be narcissistic. Truth is that he’s never been checked by any of them so this pseudo-diagnosis is based on nothing. The logic goes like this: He’s talking in superlatives about himself, loves it when others do the same about him and he doesn’t listen to what others think, so he must be a narcissist.

That is just wishful thinking (so much for thinking). Of course, he likes to be praised. He’s on a four-year reelection tour. Of course, he praises himself and runs down the opposition.

By definition, narcissistic is: empathy-deficient. But he has plenty of empathy! He could never be such a clever con artist if he had no empathy. He knows what others are feeling and plays them very well. Of course, he never shows defeat. And when in a tight spot, he hits back harder. That what he learned from his mentor Roy Cohn, and it always worked. Cohn may have been heartless – Trump just imitates him.

He’s a con artist – and a good one (he even fools the working class) – not a narcissist.

He would be stupid. But look how he handled the Hollywood tape scandal, just before the election. It would have incapacitated any other candidate, but he just played hardball. Hillary supposedly was worse by condoning Bill’s infidelities and – allegedly – bullying his victims. Besides that this is the height of chutzpa, it’s clever indeed. And it worked.

In truth, he’s a genius and therefore never learned discipline or patience. He freewheels through all trouble convinced that he’ll find a way out. (And he doesn’t look back at what cost that went.)

So, all the trying to figure out what he’s thinking and what goes on in his head is buying into his scheme of hiding that he himself has no clue. He’ll play it by ear.

He’s not stupid – he’s a clever clown – a clown nonetheless.

So there is only one possibility of what happened in that meeting. Putin let him speak freely. Trump said all kinds of stupid things and he never noticed himself what awful things he promised and declared. The Russians have it on tape and they can blackmail him with it whenever they want.

Any speculation if they had something on him is superfluous. They now have.

NATO, China and anyone else who wants to cooperate with the US (and everyone, on climate change for instance) need to wait until this clown disappears. Israel needs to accomplish as much as quickly as possible until the next US president will turn out to be anti-Israel again. And enemies like Korea and Russia need to work as hard as possible to make as much progress as long as the US is paralyzed by this clown.

And the US should do some soul searching how come “the world’s oldest democracy” (it is not) made such a mockery of the most powerful position in the world. It’s easy to blame Trump. But the system allowed for this. Something in this country run based on checks and balances needs a small adjustment.

Now, there may be one way that we don’t all need to ride out the four or eight Trump years. I don’t mean something illegal or violent, perish the thought. The House can impeach Trump if it wants to if the whole world (except Israel, Korea and Russia) unites and asks the American People to Dump Trump for: paralyzing international  diplomacy, endangering world peace and torpedoing international trade. We’ll wait and see.