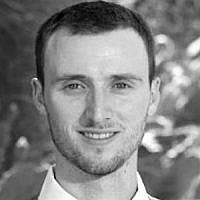 EUROPE 2017 – The tour groups fall in love with the old Jewish quarter. There’s something indescribably delightful about visiting synagogues empty of Jews, Holocaust memorials and dilapidated Jewish cemeteries. In today’s difficult tour business, the currency of touching stories that jolt bleeding hearts is a real attraction.

It’s all about the romanticized folklore Jewish community, replete with its damaged tombstones, plundered Nazi-era artefacts and miniature Rabbi-dolls-with-a-bobbing-head for sale beside the Jewish museum.

The groups shuffle in by the busload. The men politely take the fake plastic kippot handed out at the counter as the crowds gather around an exhibition of Torah scrolls placed inaccessibly behind a wall of glass.

“These were the Jews,” the guide seems to say with an air of defiance “and these were their strange customs and traditions!”

He gestures toward the exotic scrolls with his palm outstretched, like a circus magician wittily bowing before an audience.

The group immediately pulls out its cameras and phones, setting off a cacophony of flash photography in the former synagogue-turned-museum. The people of the book are gone, and all that’s left is their book.

“How curious and misunderstood these Jews were,” they must say to themselves, clicking their tongues while reading a ceiling-high list of names deported to Treblinka.

“At least these Jews were good Jews,” they probably think, “unlike today’s J…” The thought is cut off amid boisterous laughter from a group of schoolchildren echoing from the entrance like a cold, misplaced draught.

The nearby concentration camp also rakes it in. At the steakhouse opposite the crematorium you can get a sumptuous entrecote and a pint of beer to help down it. The local kids play soccer on a peaceful green lawn beside the mass graves.

One of the highlights is the cemetery. Crumbling tombstones with indecipherable Hebrew lettering from the Medieval era, surrounded by weeds and leave-less trees. If you hurry, you can get a 2 for 1 pass that includes the historic Mikveh.

The cash register opens, an exchange of money, some more tickets are printed. Another adorable Rabbi doll is sold.

This is how they like their Jews. Dead and ‘museumized’.

And this is probably what Europe would’ve looked like had Hitler succeeded fully implementing his sick plans.

Oh wait, it already does.