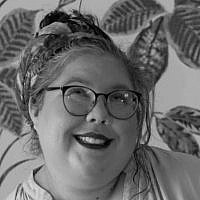 The Blogs
Maayan Belding-Zidon
Apply for a Blog
Please note that the posts on The Blogs are contributed by third parties. The opinions, facts and any media content in them are presented solely by the authors, and neither The Times of Israel nor its partners assume any responsibility for them. Please contact us in case of abuse. In case of abuse,
Report this post. 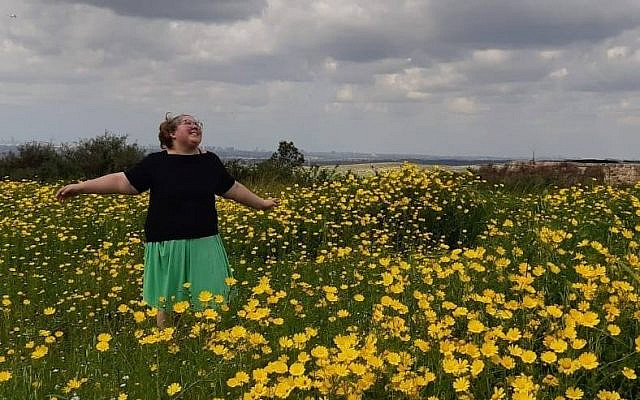 The author running free in a field of yellow flowers.

Pesach is about liberation, but an outsider wouldn’t know that from the way we talk about it. For months now, every time I’ve mentioned that Pesach is coming, at least one person has groaned and said, “Don’t remind me!” Ridding our homes of chametz, boiling huge vats of water to dunk our silverware in, digging out savta’s brisket recipe and figuring out what to serve the vegan cousin—it’s a lot of work.

But the logistics of kashering the kitchen isn’t the thing that stresses me out the most. For me, it’s thinking about what I will (and won’t) eat in the holiday. As a fat woman and a survivor of many failed diets, the combination of rich seder foods and strict dietary restrictions inspires temptation, shame, and the temptation to shame—namely, the urge to punish my body by starving it after a holiday feast.

This cycle is called the “restrict-binge cycle,” and it’s a prominent feature of many eating disorders. Many of us who do not meet the clinical diagnosis criteria for an eating disorder, though, are also far too familiar with the downs and the even-further-downs of this cycle.

This disordered pattern of eating is, in fact, the base line for millions of people who try to follow the restrictive demands of the latest fad diet, only to binge eat once they inevitably fail. The shame of the post-diet binge makes them look for the next diet, hoping that this one will work—and so the cycle goes on. Whether it’s keto, Whole 30, or intermittent fasting, study after study shows that the majority of diets fail—which means that for many people, this cycle, driven by diet culture, can last their whole lives.

Not all restrictions on food are disordered. Vegetarianism and kashrut, for example, are common ways of restricting what you eat that are not inherently problematic. One of the signs that a restriction is problematic, according to experts, is the wholesale rejection of an entire food type as “bad.”

This is where the Pesach restriction on chametz becomes a problem. Carbs, and especially bread, are one of the food groups most frequently demonized by diet culture. This has led many people to look at our ancient agricultural festival as an opportunity for a “detox” or a dietary “cleanse.”

But chametz isn’t dirty. Fifty-one weeks of the year, it’s a mitzvah to bake fluffy, sumptuous challah—and the reason we cut it out for Pesach is not because it’s unhealthy. Far too many drashot, however, talk about cleaning the chametz out of our hearts—as if there is something inherently sinful about leavened bread.

How many divrei Torah have we heard about how chametz represents the puffing up of the ego? For people with eating disorders, the coded language of “puffing up” has obvious body image connotations. Eating chametz makes you fat. Being fat is sinful. Avoiding chametz means avoiding sin. These are the kinds of thoughts that lead to disordered eating—the polar opposite of bodily freedom that the holiday is meant to celebrate.

There is another way to think about the spiritual significance of chametz and why we avoid it on Pesach, one that doesn’t demonize it or call it evil. Agriculturally, Pesach is the beginning of the barley harvest—the first time it becomes possible to make bread out of new grain. By clearing out last year’s chametz, we actually make space for this year’s grain. From this angle, Pesach is a festival of new life and renewal—not restriction.

Eating disorders are the most lethal mental illnesses, and experts consider them to be significantly under-reported due to individual and family shame around the disorder. Fortunately, it’s becoming more and more common to talk about how eating disorders can impact Jewish observance—specifically around Yom Kippur and other fast days, which can function as intense triggers for disordered eating even among people who have been in recovery from their eating disorder for years.

It’s long past time, however, for us to consider how the way we talk about and practice our Judaism impacts the people in our communities with eating disorders all year long. In particular on Pesach, as we celebrate our liberation from Mitzrayim, from the narrow place, I pray for all Jews, especially those enslaved by disordered eating, to move away from the self-punishing scarcity mindset into spiritual expansiveness and abundance.

About the Author
Maayan Belding-Zidon is a writer and Jewish educator living in Rishon LeZion with her wife and three cats. She studies at Machon Schechter in Jerusalem.
Related Topics
Related Posts
Comments