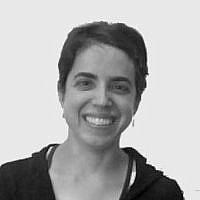 The Blogs
Sarah Meyers
Apply for a Blog
Advertisement
Please note that the posts on The Blogs are contributed by third parties. The opinions, facts and any media content in them are presented solely by the authors, and neither The Times of Israel nor its partners assume any responsibility for them. Please contact us in case of abuse. In case of abuse,
Report this post.

The entrance almost made it look like a place you’d go on purpose: if not for vacation, then for school or a conference or something. Cheerful blue letters on fresh terracotta spelled out the vaguely euphemistic מרכז שהייה חולות, “Holot staying center,” and above it were written the words “prison services,” and flags fluttered in the breeze in front of the barbed wire. Across the road from us was Saharonim prison, and beyond that, the Negev sands stretched on endlessly.

I had come with a van full of asylum seekers and activists for a Passover seder with the inmates of Holot. Buses carrying similar groups had already arrived from Jerusalem and Tel Aviv. We were there for the Refugee Freedom Seder at Holot. A coalition of activists has held Refugee Seders for years in Tel Aviv together with Sudanese and Eritrean asylum seekers, and this year, an additional event was held with the inmates of Holot Prison (let’s drop the euphamisms). The irony, and deep painfulness, of celebrating freedom from slavery in Egypt with people who had fled massacres and forced labor, crossed the Sinai and survived the torture camps there, only to reach the promised land and be imprisoned once more, was not lost on us.

The seder was scheduled to take place between the thrice-daily mandatory roll-calls that control the prisoners movements. I was introduced to A, a young man who had recently spoken at Ben Gurion University, where I study medicine. He described how much of each day was lost to roll-calls- they wait in line for an hour at 6 AM, at 1 PM, and again at 10 PM, to be signed in. Three hours a day of waiting in line.  He had applied for permission to miss a roll-call to speak at the university, but permission had been refused.

“The first time, I get a warning,” he told us. “If it happens again, they will send me to Saharonim Prison.” The biology student was concerned that she had put him at risk, but A insisted that it was worth it. “We need people to hear our stories.” He told me how he was from Nyala in Darfur, and had fled to Egypt. When they began shooting the Sudanese in Egypt, he fled to Israel. He told us how the government-sponsored killings in Darfur had never quite stopped, but they had started again in earnest. He wants to go home, he told us, but he will not do so until Sudanese President Omar al-Bashir is dead. “Then it will be safe,” he told us.

Food was served and the seder began. Matzot were distributed, as dry and cracked as the desert sands. A rabbi spoke about the biblical commandment to “love the stranger, for you were strangers in the land of Egypt.” Our friend A got up to speak, and told us our own story. “For four-hundred years you were slaves in the land of Egypt. And then God brought you out, and you wandered for forty years in the Sinai desert. We have walked the same paths that your people walked. And even now there are still Eritreans imprisoned in the Sinai”

An African activist from Berlin told us another part of our history, how 60 or 70 years ago, Jews were fleeing from murder and oppression and seeking refuge. Addressing the inmates, he said about us Jews “I feel they have forgotten what happened to them.”

Later, I spoke with R, another inmate. He has been in one prison or another since the moment he crossed into Israel. The only exception was the asylum seekers’ protest march in the bitter cold last winter, where he briefly saw Jerusalem before being returned to jail. His brother made it to England where he was granted asylum and will be resuming his studies, but R made it to Israel and has been granted prison. R wants to get an education and have a family, but he can’t imagine he will be allowed to have these things. He cannot understand why I live in Israel voluntarily; to him it is one more bitter and oppressive place.

The sun beat down on us and there was no shade to be found, just a few inadequate pieces of wooden lattice. The doors to the toilets were broken and flapped open and closed in the breeze. When we left- when we had the privilege to leave this depressing place, I thought about how easy it is to forget things. To forget how Pharoah said “come, let us deal wisely with them, for they are a demographic threat and a cancer in our body.” To forget that God said “Do not oppress the stranger; for you know the heart of the stranger, for you were strangers in the land of Egypt.”