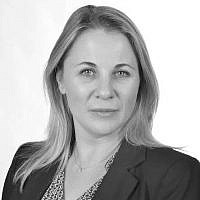 The Blogs
Ksenia Svetlova
Apply for a Blog
Advertisement
Please note that the posts on The Blogs are contributed by third parties. The opinions, facts and any media content in them are presented solely by the authors, and neither The Times of Israel nor its partners assume any responsibility for them. Please contact us in case of abuse. In case of abuse,
Report this post.

“We need to cancel the plan to establish a mixed praying plaza at the Kotel, and if the US Jews are offended — so be it.”

Hard to believe, but this distasteful and hurtful remark belongs to none other but MK Dudi Amasalem, the head of Knesset committee for interior affairs.

This week the committee visited the Western Wall accompanied by Rabbi Rabinovich, the rabbi of the Western Wall, and upon return to the Knesset, Amsalem made a decision — the plan for a “reformed” Kotel is doomed.

But was it Amsalem himself who decided to rebel openly against a plan that was ratified just this spring by the government? Or perhaps Amsalem just reported a message from someone else, someone who decided to back off after harsh resistance waged by the ultra-Orthodox Members of Knesset?

Just 24 hours prior to Amsalem’s attack, Aryeh Deri, the leader of Sephardic ultra-Orthodox “Shas” party said, during “Question Hour,” “While I consider the Conservatives and the Reforms my brothers [wait, what about sisters?], I believe that these currents are not Jewish at all. This is not Judaism.”

And it goes on and on and on.

Not a day goes by without an ultra-Orthodox Israeli newspaper mocking Reform and Conservative Jews. Moreover, all of the legislation that was designed to open up Israel to religious pluralism has been annulled or substituted by much harsher laws on conversion, marriage recognition, and more.

It seems that those who lead our country today have forgotten that no man is an island, and no country is an island either. That is especially true of Israel. Israel, as the late prime minister Yizhak Rabin once said, is a home to all Jews, a refuge to all Jews and the responsibility for all Jews is on the shoulders of Israel and its leaders.

That responsibility is tremendous.

It means that Israel should seek better relations with the Jewish Diaspora around the globe, and not alienate Jews. Given that Israel’s primary capital is its human resources — the people who live here — the country’s officials should be careful about words that are being said with regard to these communities and their respective governments in order not to destabilize the situation of the Jews in the world.

Similarly, Israel should welcome each and every Jew in the world and make him or her feel at home — indeed, by being sensitive to every Jew’s beliefs, customs and etc.

The only possible way forward is a way of compromise — or else the miracle that is a State of Israel will be in danger. The only thing that can crush us are internal feuds. Such a compromise was reached with the help of Natan Sharansky, the head of Jewish Agency, just this past spring, between the government and the Reform and Conservative Movements.

Yet now, the government has rescinded its support for that agreement.

Needless to say, the ramifications for the ties between Israel and the Diaspora have the potential to be grave. How can one expect total support and engagement from the very same community that is being pushed aside, time after time and treated with such unbelievable disrespect?

I would like to remind my friends at the Knesset, that “the American Jewish lobby” is not an abstract term — real Jews who are part of ourselves, flesh and blood, stand behind this name. And if there is no improvement anytime soon, than the next generation of North American Jews will be alienated from Israel. The precious link between Jews there and here might be lost forever.

I am not speaking of some pre-determined fate, but of mundane act that still can be altered and improved. The time to act on saving the ties between various parts of Jewish nation is today, time to speak up for religious pluralism is today. We shall never let the narrow political interests dominate our present and our future, for the sake of Israel, for the sake of the Jewish nation.

About the Author
Ksenia Svetlova is a Middle East affairs expert and a publicist. She was a member of Knesset for the Zionist Union and previously worked as a journalist specializing in the area of Arab affairs.
Related Topics
Related Posts
Comments