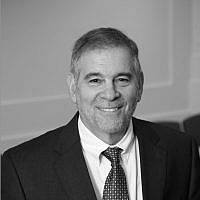 The Blogs
Michael Berenbaum
Apply for a Blog
Please note that the posts on The Blogs are contributed by third parties. The opinions, facts and any media content in them are presented solely by the authors, and neither The Times of Israel nor its partners assume any responsibility for them. Please contact us in case of abuse. In case of abuse,
Report this post.

I’ve always found it comforting that—despite how tumultuous the world may be—the Jewish calendar remains a constant in our lives.  As we observe another Tisha B’av this Thursday with fasting and lamentations, I am reminded of past summers when this sacred fast day occurred, including memories of my childhood at summer camp when on the lone summer day the whole camp observed Tisha B’av.

Tisha B’av in the year 1967 conjures up a different memory. Just weeks after the salvation of the Six Day War, I spent the sacred day in Jerusalem, where, for the first time in generations, the city was reunified and we could visit the Western Wall. Surrounded by exuberant Jews, we recited lamentations and wondered whether we were bearing witness to a transformative moment in Jewish history. In some ways, it felt paradoxical: how could we mourn a Jerusalem lost in the midst of a Jerusalem being rebuilt?

Nine years later, Tisah B’av came while I was in Kiev, sitting anonymously among Soviet Jews, days after the Israeli raid on Entebbe. I was asked to chant the great poem of Yehuda Halevi precisely as I was in the Soviet Union, a representative of Zion advocating for the fate of refuseniks.

For me, whether I’ve been at summer camp, in Jerusalem of gold, or in the USSR, Tisah B’av has long been cause for introspection—an opportunity to reflect on the past and project into the future. But this Tisha B’av, more than any in recent memory, our we find ourselves in the midst of a difficult moment.

As we observe Tisha B’av, four interrelated crises continue to play out: the pandemic, which threatens our very lives; an economic crisis, which threatens our future and creates uncertainty when it comes to what we can offer our children; a leadership crisis that demoralizes us and threatens the global future; and a crisis of freedom, prompting us to question how we can live up to the foundational American values of freedom, justice, and equality.

There is much to lament this Tisha B’av. But this day also reminds us that the miracle of Jewish life is that defeat has never been final. We have time and again rebuilt.

When faced with the destruction of the Holy Temples, the Jewish people exhibited great resilience. Today, we are also living in a time of restoration after the destruction of the horrific Shoah. In many ways, our existence is a testament to the perseverance of the Jewish people in the face of tragedy. We have answered death with the creation of new life, families, and children. We have responded to suffering by bearing witness, enhancing human dignity and decency, and warning against indifference.

We have, time and again, rebuilt in the aftermath of destruction—and we must channel that same ethos as we confront the COVID-19 pandemic and navigate its effects. As Tisha B’av reminds us, it is harder to rebuild than to destroy, harder but more essential!

As we turn to rebuilding from this difficult moment, I draw strength from the words of the Prophet Jeremiah, who consoled the Israelites after the first Tisha B’av and helped lay the blueprint for our people’s survival in exile. As the Jewish people contended with the destruction of their Holy Temple and pondered the future of their faith and their legacy, Jeremiah—in a message as prescient then as it is today—offered an assurance to our people: “There is hope in your future.”

Dr. Michael Berenbaum is a Professor of Jewish Studies at the American Jewish University and Director of the Sigi Ziering Institute: Exploring the Ethical and Religious Implications of the Holocaust.

About the Author
Michael Berenbaum is a professor of Jewish Studies and the director of the Sigi Ziering Institute: Exploring the Ethical and Religious Implications of the Holocaust. He was president of the Survivors of the Shoah Visual History Foundation from 1997 to 2000.
Comments