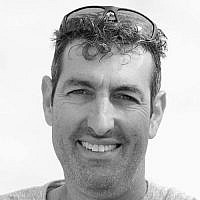 The Blogs
Geoff Winston
Apply for a Blog
Please note that the posts on The Blogs are contributed by third parties. The opinions, facts and any media content in them are presented solely by the authors, and neither The Times of Israel nor its partners assume any responsibility for them. Please contact us in case of abuse. In case of abuse,
Report this post.

A Tale of Three Pictures

In Israel, we have entered a special and interesting (meaningful) time.  We didn’t need the Corona virus to appear in order for us to feel it.  It is said that the kids are not missing much from school nowadays since standard lessons after Passover are at a minimum even during normal times.

Just a few days after Passover, Israel stopped to commemorate Holocaust Remembrance and Heroism Day.  A few days later – Monday night and Tuesday, April 27-28 – Israel commemorates Memorial Day for Fallen Soldiers and Victims of Terrorism, who made the ultimate sacrifice in defending the citizens of the State of Israel, ensuring that the Holocaust could never happen again. And then, on the following day – the fifth day of the Hebrew month of Iyar, Israel makes the harsh transition from mourning to jubilation, as we celebrate Israel’s 72nd birthday.

The pictures below tell part of the story of how my family got to where we are today.

In chronological order, the picture on the left is my paternal great-grandfather, Rev. Solomon Lipson.  This picture is dated about 1915 or 1916, at the beginning of the First World War.  Notice the Star of David on his cap with the insignia of the Jewish Brigade.  Rev. Lipson was the Jewish Chaplain of the British Forces.  A large group of Jews lobbied the British government to allow them to fight with the British during World War One, with the hopes of pushing back the Ottomans who controlled the land of Israel at the time. The Jewish Brigade played a serious role in the war, with a huge number of Jews volunteering.  The success of the Jewish Brigade was one of the things which contributed to the Balfour Declaration of 1917, which pronounced Great Britain’s commitment to allowing the Jewish people a homeland in the land of Israel.  My great-grandfather was present at the presentation of the declaration.  If only it would be so easy…

The middle picture is of my maternal great-grandfather, Fulop Fish, my great-grandmother, Terry Fish, and their three children, including my grandfather seated on the left.  Although it is more difficult for me to date this picture, I believe it’s from the mid to late 1930s, in Satu Mare, Hungary. On the holiday of Shavuot, 1944, the Jews of Satu Mare – 19,000 of them out of a general population of 55,000 in the city – were rounded up and taken to Auschwitz-Birkenau.  There they were divided up.  My great-grandparents were taken to their deaths immediately.  My grandfather, 32 at the time, had a number tattooed to his arm and was taken into forced labor under horrific conditions.  I could only imagine how much they would have wanted to have an army of the Jewish people to save them. When the Nazis rounded up the remaining Jews to take them on the “death march”, my grandfather opted to go to the gas chambers instead.

As fate would have it, the Russians liberated Auschwitz on the very day my grandfather was supposed to be murdered.  He went back “home”, was rejoined by my grandmother and, less than a year later, gave birth to a daughter (my mom).  In 1946/7, they ran away from communist Romania (the borders shifted during the war, bringing Satu Mare under Romanian control) and eventually successfully immigrated to America, an amazing story in and of itself.

In 1967, war broke out in Israel again.  My father, who had just graduated university in England, decided to come to Israel to help fight.  As the war only lasted six days, by the time he got here, the war was finished.  So he went to volunteer on a kibbutz in the middle of nowhere.  A few months later, my mother, who was studying in Paris at the time, decided to come to Israel as a volunteer and was placed on a kibbutz in the middle of nowhere.  A year later, they were married, and while pregnant with me, decided to go to America, as Israel at the time was in an unstable period, and having their yet-to-be-born son need to join the army in another 18+ years was not to their liking.

Growing up in East Brunswick, New Jersey, I came to the conclusion that their decision was wrong.  Don’t get me wrong; I loved growing up in America.  But Israel was home.  As a result, at the age of 22, I returned to Israel and enlisted in the Israeli army.

The third picture is the dream of any Israeli Jew.  Whereas we pray for peace, reality is the Jewish people needs a strong army.  This picture, taken just a few months ago, is my oldest son, a Sabra (native born Israeli), becoming an officer in the IDF in October.  It is his job – together with the rest of the IDF – to make sure that Jews have someone to protect them if and when needed, and a home, whether or not they decide to live in that home.

On Tuesday night-Wednesday, Israel will celebrate its 72nd birthday.  But before we can do that, we remember what happened to the Jews before Israel was created, and we pay our respects to the soldiers and civilians who made the unlimited sacrifice to make sure that Israel continues to exist.

Happy Independence Day!  And as we said during the Passover Seder, Next Year in Jerusalem!

About the Author
Geoff has been living in Israel for nearly 30 years. He is the Programs Director at Keshet Educational Journeys and is a licensed tour guide through the Ministry of Tourism. Previously, Geoff was a founding staff member of the Keshet (no relation) Democratic School for secular and religious students in his home town of Zichron Yaakov and before that an educator at the Alexander Muss High School in Israel. He is a husband and father of five.
Related Topics
Related Posts
Comments