The Blogs
Alan Kaufman
Apply for a Blog
Please note that the posts on The Blogs are contributed by third parties. The opinions, facts and any media content in them are presented solely by the authors, and neither The Times of Israel nor its partners assume any responsibility for them. Please contact us in case of abuse. In case of abuse,
Report this post.

In response to Marine Le Pen’s claim that French police were not responsible for the deportation of Jews to the Velodrome D’hiver, Drancy and Auschwitz, I offer this eyewitness account by my mother, nee Marie Jucht, a French Jewish Holocaust Survivor from Paris, of the role of the French Police — and so, of France — in the arrest and deportation of French Jews to the Velodrome D’hiver, from which they went to Drancy and then to Auschwitz to be gassed.

The letter is part of a series of letters that she composed in the last year of her life, at my request, in which she portrays her survival in the Holocaust. Her letters are now on deposit in the Marie Jucht Kaufman Papers in The Special Collections of the University of Delaware.

Here are more facts about my life under the German occupation.

July 16 1942 at 5 A.M. The French police knocked at our door. I awoke by the noise, there stood a French policeman, with a list in his hands.

He asked my mother if this was the residence of the Jucht family. My Mother said yes. He came in and started to ask Where was my Father and my brothers? He named every one of them. My Mother told the policeman that they all had gone to the unoccupied zone. Then, the Policeman told my Mom, when looking at me, is she Marie, your daughter? My Mom responded yes, that I was her daughter. The Gendarme told my Mother that he had orders to arrest us. He said that we would be sent to work in Germany. He told us to take all the valuables with us, plus food and clothing.

My Mother could not believe that they would arrest us since the rumor had not been very specific, it was to be only men not boys! The policeman let us go in another room to get dressed. Mother told me in Yiddish to take a blouse that had no Star of David on and also a light jacket with no star. She did the same with her clothes. She took the money that my father had given her before going to hide and all her jewelry and put it in her handbag.

As we were getting dressed we looked out the window and saw our neighbors, who lived across our building in the courtyard, being arrested by two policemen. They carried valises, blankets, food. Our neighbors were a big family composed of 11 children and their parents, it was lucky that the 7 younger children had been placed in the rural country in different places because it was July, vacation season in normal times, but in those circumstances it was to save their young lives. Anyway, we saw the Father, the Mother carrying a little infant of 3 months called Marie, the oldest daughter called Sonia (she was engaged to be married) aged 19—then their oldest son 17 named David and Bernard aged 15.

Then my mother told me to do exactly what she would tell me. I saw in my Mother’s eyes terror and fear. She was an exceptionally intelligent woman, she saw at that moment that death was our destination. She refused to take anything with us. We came in the living room where the Policeman was waiting for us. He told my mother how come she did not pack any valises or take any food? Mother told him: “Where we are going, my daughter and I, we will not need anything! That we will have no more needs…”

When I heard these words I realize that I was going to die. I started to cry, with no control. The Gendarme looked at me with some pity. He told my Mom that we probably would be put to work in a factory in Germany! Mother told him what could a Baby of 3 months do? Then she told him: “You should be ashamed to arrest a French National like you are—your own people!” She told him: “I am Polish. I will go with you, but let my daughter go…” I started to cry even louder and told my Mother that I will not go without her. When we went down the stairs, she told me that we have to escape if the opportunity presents itself.

When we arrived in the street the spectacle we saw…would remain in memory for years & years. Thousands of people sitting on valises with little children, babies, teenagers, Men & Women of all ages and of course so many Policemen running left & right! Some of them yelling that some tenants would not open their doors…and were forced to break in! Of course they were French people who sympathized with the Jews that had been their neighbors and were screaming at the Gendarmes that they were collaborators of the BOCHES! To leave us alone….and so many French people looking out from their windows…

All of a sudden my mother told our policeman she would like to buy some bread to take along with us because we were going to the Velodrome D’Hiver for several days before being deported and we would starve…there was a bakery at the end of the block.

The policeman told us to go and keep on going, he turned away and started to help the people boarding buses to take them away to the stadium (Velodrome D’Hiver). Mother and I just walked normally until we got around the corner, then we run to another block, as we run we saw the buses full of people waving goodbye to us. We heard the policemen’s whistles as some Jews had try to escape (they had worn the yellow stars)” …

I love you ever, 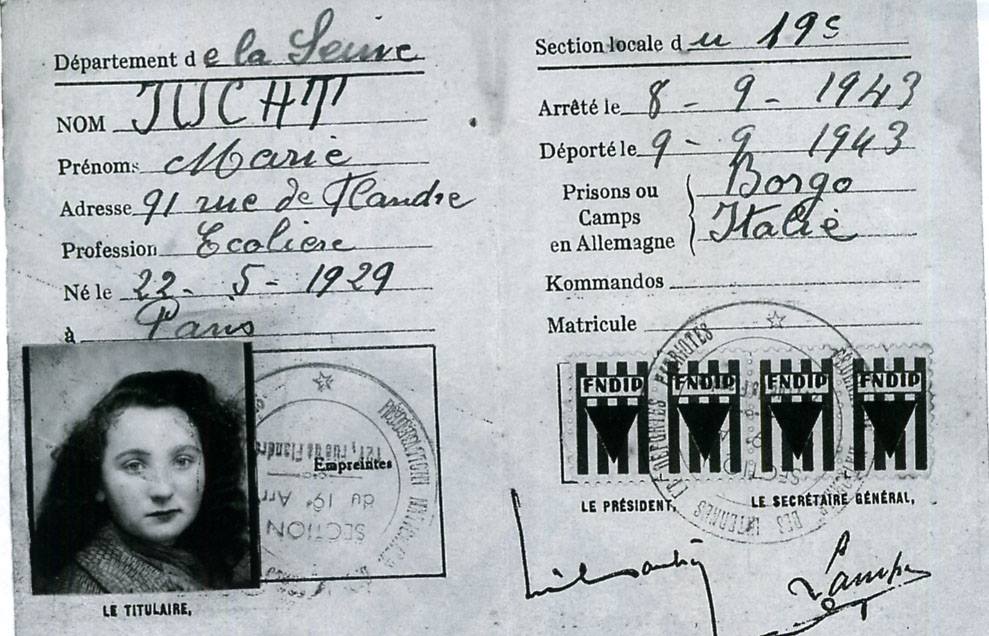 About the Author
Alan Kaufman is an American-Israeli novelist and memoirist. His latest novel, The Berlin Woman, has just been published by Mandel Vilar Press. His other books include the novels Matches (Little Brown) the memoirs Jew Boy (Cornell University Press) and Drunken Angel (Viva Editions).
Related Topics
Related Posts
Comments