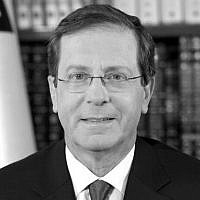 The global climate crisis spells disaster for the Middle East, but like all crises, it also offers an opportunity. As COP27 begins in Sharm el-Sheikh in Egypt, world leaders will be arriving in a Middle East in the grips of a positive realignment: a new regional alliance is forming between Israel, its Arab neighbors, and the broader Eastern Mediterranean in response to the climate emergency.

The ninth president of Israel, Shimon Peres, spoke of his vision of a New Middle East; I call this the Renewable Middle East.

The Renewable Middle East is an emerging alliance to find common solutions to perhaps the single greatest threat to our region: the climate crisis. It is a vision of a regional ecosystem of sustainable peace; a region that is not only “new” in the sense of different, but is sustained by its own positive momentum.

Today, I arrive at COP27 in Egypt, the first Arab country to make peace with Israel. Since the historic Israel-Egypt Peace Treaty of 1979, Israel has made peace with Jordan and most recently has normalized ties with the United Arab Emirates, Bahrain, Morocco, and Sudan. The Abraham Accords could not have come soon enough, pushing the Middle East toward the rapid reinvention it needs to meet tomorrow’s challenges. I fervently hope that more nations in our region will join this green realignment, including our Palestinian neighbors and one day, Syria and Lebanon too.

Let nobody be in any doubt: if the world misses its 1.5 °C target, the Middle East will suffer disproportionately. A hot, dry region will become hotter and drier; rising sea levels will threaten coastal populations. And it is because we all face the same challenges that we must join forces around common solutions. Our lives depend on it.

In a historic shift, Israel is integrating into the Middle East, as its neighbors recognize that a future of dynamic engagement with the Jewish and democratic state, based on a shared commitment to our children’s future, holds the keys to a brighter future.

The Renewable Middle East has the potential to be truly transformative in the field of clean energy, as a source of solar energy for Europe, Asia, and Africa. Where others might see a vast expanse of desert from the Maghreb to the Gulf, I see an opportunity to generate clean energy and leverage Israel’s location at the intersection of three great continents to export it to the world.

I first made the case for the Renewable Middle East in a speech on February 23, on the eve of the war in Ukraine. The ongoing surge in energy prices around the world has only underscored the need for reliable sources of green energy.

As Israel and its neighbors begin to collaborate on joint ventures, projects that will help Europe, Asia, and Africa address their own challenges in the fields of food security, water management, and more, this momentum of partnership will become self-sustaining. It will be a renewable peace.

It is for this reason that I established the Israeli Climate Forum, under the auspices of the Office of the President of Israel, to keep the environment at the top of Israel’s national priorities and to bring together some of the most influential people in the country to brainstorm and implement creative solutions to punch above our weight, despite Israel’s small size.

The Renewable Middle East will lead the way for the same reason that Israel has always punched above its weight, despite, or maybe because of adversity: because there is no other choice, and the climate crisis really is a matter of life and death.

In our increasingly turbulent world, the Renewable Middle East is a ray of sustainably-powered light. Skeptics may call it a pipe dream, but this pipeline will carry the green energy that will help to liberate the world from its fossil fuel dependence while creating sustainable partnerships to power our region into a new, cleaner era.

If world leaders at COP27 are serious about limiting global temperature rises, then fostering and joining Middle Eastern partnerships is a sound, green investment. I call on all delegates at COP27 to explore the latent opportunities in Israel’s full integration in the Middle East, to push for more partnerships across the region, and to join and invest in this infrastructure of sustainable peace.

The Renewable Middle East that we are building now will yield dividends for many decades to come, not only for the peoples of the region, but for the entire world. History is already pointing in this direction; the only question is whether history will move quickly enough to save our planet.

About the Author
Isaac Herzog is the eleventh President of the State of Israel.
Related Topics
Related Posts
Isaac Herzog