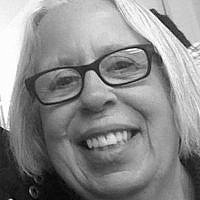 You are fortunate I did not have a gun when I woke and found you in my bedroom at 6 am because I would have shot you without a second thought. I screamed, yelled “get the f**k out” and chased you back out of the alleyway door you had broken into. You ran from a sixty-eight year old woman in pajamas. As a burglar, you are a massive failure.

You chose a home without a television, sound system or any other consumer goods. There is nothing here. You chose a home that is an affordable dowdy apartment in which resides an older woman who works at sixty-eight years old because she does not want her savings to die before she does. Yes, I have a great job and wonderful co-workers, but the income is needed.

Your total take was 190nis, a wallet empty except for one photo of me and my father, z”ll, taken when I was five or six, and a small blue ceramic jewelry box that contained nothing of monetary value but a lifetime of experiences and love. The tiny gold plated mezuzah was given to me by my parents when I was seven or eight. The small star of David was also a gift from my parents when I was a child. The silver earrings with beads was made for me by a friend in the 1980s.  Multiple pairs of earrings…..gifts from loved ones….ironically, one pair on Valentine’s Day which was the day of the break-in. And I can go on, but I will not.

What you stole is worthless to anyone else but me. When you realized that it was mainly jewelry with no value, you probably tossed it in the trash. When I spoke with the police, within a minute after I chased you out, the first question I was asked was “Was he wearing a kippah?”.  Later, this question broke my heart. I am not a foolish dreamer and I know that some Jews do bad things, but this threw me.  And then after speaking with several people, I was reminded that drug addiction does not steer clear of young Jews.

So, dear thief, who might be a Jewish drug addict or a down on his luck Arab guy or who knows what, clean up your act.  You got nothing of value from this burglary and I hope you felt some shame at the sight of decades old child’s jewelry.

The irony of this is that friends who live in Gush Etzion, a place many think is dangerous, offered me sanctuary….a safe, cozy place to sleep.  And, it sounded safer than being in my Jerusalem apartment in an upscale neighborhood that I could not afford without living in a tiny old school beat up apartment. Yes, it felt as if the Gush could have been the safest place to be because of the high value put on community in the towns and yishuvim that are scattered through the Judean hills.

So this is for the burglar but is as much for Jerusalemites. Our beloved city has all the problems of any major city. We do not know our neighbors, elderly are vulnerable and often targets of crime and isolated, and many neighborhoods are filled with ghost apartments….empty most of the year as owners retreat to their “other” homeland when the weather sucks or when terrorism scares them off.

But for us, including you, my incompetent burglar, we are here and committed to this city. You, sir, do not help the quality of life that so many work hard to improve. You, young man wearing a hoodie, are a thief from those who have little. And your reward had no value other than the next drug purchase; only one purchase from the small amount of cash you got and the invaluable to me but worthless to others jewelry.

That being said, this morning in my morning prayers, I thought about you. Were you at it again this morning at 6 am, peering in a window, breaking a lock, stealing someone’s precious memorabilia? Or were you sitting somewhere thinking that you were living a sad existence and needed to change course? I hope the latter.

And I really would have shot you and would have been justified. As it was, you ran…a sad thin figure running through my yard to the street with less value than when you entered my apartment.